Share All sharing options for: Tigers Shell the Razorbacks! 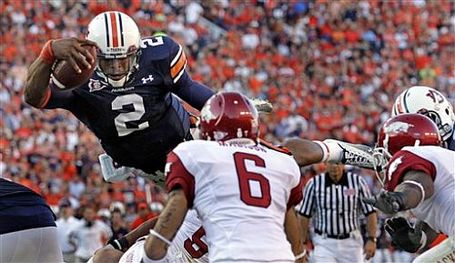 It was a record-setting day for the Tigers.

War Eagle, everybody! It's time now for the Acid Reign report on Auburn's 65-43 win over the Arkansas Razorbacks. Let me repeat that: 65-43! No, that's not a basketball score. No, we haven't joined the WAC or PAC-10. Auburn has never scored that many points against an SEC opponent. I believe the previous high was set in 1970, when the Tigers beat Florida in Gainesville 63-14. Auburn's 22 point victory margin was the most ever for the Tigers over the Razorbacks. The previous high was 21 points, set in a 28-7 night game win in 1996. The key factors in this game were Cam Newton, and Razorback turnovers. The Tigers did not turn the ball over, at least officially. Newton ran wild again, taking over the game. If there's a more dominant player in the SEC, I haven't seen him!

As expected, the Arkansas offense beat up on an Auburn defense with a suspect secondary. The Tigers had some early success jamming Razorback receivers and throwing timing off, but Arkansas adjusted. There were also some protection issues exploited by the Tigers. The Razorbacks fixed those, too, but not before losing quarterback Ryan Mallett to a Nick Fairley-generated concussion. Sophomore Tyler Wilson replaced Mallett, and the Razorback onslaught continued. For the game, the Tigers were hammered for 43 points and 566 yards. Arkansas averaged 4.9 yards per rush, and 8.7 yards per pass. As poor as this defensive performance was, the Tigers did force three turnovers, which allowed the team to put the Razorbacks away in the 4th quarter.

This week, the Tigers put together one of their best special teams efforts in quite some time. There were the strong kickoffs by Wes Byrum, as well as perfect place kicks. Freshman punter Steven Clark improved. The Tigers got their first blocked punt since the 2006 Tre Smith somersault against the Gators. Freshman Antonio Goodwin did a masterful job of faking out the protection and getting to the punt untouched. Kick coverage was dynamite, holding the Razorbacks to just 17.9 yards per return. Kick returns were off the chart, as the Tigers averaged a whopping 44.2 yards. The Razorbacks got tired of Demond Washington slashing for 30 yards per attempt, so they kicked it to Onterrio McCalebb. That was a big mistake, as McCalebb ripped off a 99 yarder that set Auburn up at the one yard line. In a record-setting high-scoring game, those kickoff yards are pretty important.

As strong as the Razorbacks were on offense, they had no answer for the relentless Auburn attack. The Razorbacks could not come up with a turnover, and only forced Auburn to punt twice. The Tiger offense generated 470 yards, and it would likely have been a lot more if not for good field position generated by the special teams. The Tigers rolled up 330 yards on the ground, the third 300 yard effort in a row against an SEC defense. The Tigers rolled along at 6.7 yards per carry, and 9.3 yards per pass attempt, topping the Razorbacks in both areas. Cameron Newton had a tremendous day, with excellent passing, and insane running. Newton displayed elusiveness, and great power when necessary. Several Razorback defenders are still likely recovering from the Newton freight train that ran over them! I've read a few complaints on the Arkansas boards that Auburn ran up the score unnecessarily on the last TD. Hey, guys: if you can't stop a simple dive handoff to a true freshman with a gimpy leg, that's too bad. It's not like we ran a Spurrier bomb. You don't take a knee with over six minutes left and only a 15 point lead against Bobby Petrino.

The officiating was less than good. We saw phantom flags on both sides, with officials guessing. A very strange series of events turned an apparent Fannin fumble into a score. Arkansas fans are still wondering where that "touchdown signal" was, after the refs made that story up to cover their tails. Replay was inconclusive, but it sure seemed like the call on the field was "fumble." There was also a fumble by Broderick Green that was returned by Zach Etheridge for an Auburn score. The CBS crew found at least one angle that showed a knee down before the ball was out. Why have replay officials, if they are too afraid to make use of it? I don't like Auburn wins tainted by the officials. I'd rather win or lose without help. There'll be a game down the road where this sort of chicanery bites us, as the bogus calls go the other way.

Defensive Line: C-. Nick Fairley continues to be a force, racking up 8 tackles, two quarterback hurries and one Heisman candidate knocked out of the game. He was doubled most of the afternoon, and needed more help from his fellow linemen. There was some good hustle by Mike Blanc, but our ends need work. All we got from the defensive end position was 3 tackles and 2 QB hurries. The line managed six QB hurries and 2 sacks against an offense that threw the ball 49 times. We also gave up 4.9 yards per rush to the SEC's last place rushing team.

Linebackers: C. See that last sentence above. There was some failure to wrap up ball carriers, and blown coverages on backs and tight ends. Kudos to Josh Bynes with the two centerfield interceptions. The playing rotation of Bynes, Stevens, Bates and Evans came up with 27 tackles.

Secondary: D-. I give a passing grade here only because of Neiko Thorpe. Yes, he got lit up a couple of times. But Thorpe was pretty effective jamming receivers at the line, and made some key tackles in space. Thorpe made TEN solo tackles, plus broke up a slant pass late in the game. He needs some help. The other side of the field had guys running around making plays all day. Arkansas didn't get the deep strikes down the middle, but they hit everything else to the tune of 428 passing yards.

Punting: C+. I suppose we'll have to take a 39.5 yard average with no returns. Steven Clark hit 'em pretty high. We've been spoiled for the last 20 years, I think. It seems like we've always had guys that could boom a 50+ yarder, names like Terry Daniel, Damon Duval, Kody Bliss, and Clinton Durst. I'm hoping Clark gets there.

Punt Returns: C. I factored Antonio Goodwin's blocked punt in here. That was a great play! Quindarius Carr's 5 yard loss on his only attempt wasn't so good.

Kick Returns: A. Good blocking on most returns, and some nifty running. Onterrio McCalebb almost had a score, but got tripped up at the last second at the one yard line. We may start seeing squib kicks if we keep this up!

Place-kicking: A+. Byrum hit 3 field goals and 8 extra points. No misses. He also hit some towering shots on kickoffs, which really allowed the coverage to get downfield. I'm thankful that I don't have to watch CBS on kickoffs next week. The grainy end zone footage of those wasn't so great.

Offensive Line: A+. This was a pretty stunning performance. Arkansas really loaded the box in this game, and we were great all the way across. You don't set a school SEC scoring record without great offensive line play. There were three penalties against the line, and all of them were ridiculous. Ziemba and Pugh each picked up holding flags that weren't. Pugh was called for a personal foul on a routine block with the ball still in play. Tremendous day up front for the Tigers!

Receivers: A-. The receivers were mostly blockers on the day, and who'd have ever figured that Kodi Burns would become a dominant tight end blocker? There were some great catches, too. Points off on an early Emory Blake dropped ball. He redeemed himself with a great route and TD catch over the middle late.

Running Backs: A-. Do you count off for a fumble that wasn't? I suppose not. Mario Fannin has those plays where he hesitates in the middle, and gets buried. I start to want him yanked, then he carries half the defense 5 yards on the next one. Fannin was a good option out of the backfield, too. Dyer and McCalebb came in and delivered some big runs. Unsung heroes this day were Eric Smith and Phillip Lutzenkirchen. They opened some holes against the Razorback linebackers and safeties!

Quarterback: A+. There's little to complain about here! Newton continues to make all the right moves. He's a threat every snap. He's a joy to watch. Do we give him points off on the delay of game penalty? No, not after he sailed over the defense for a score anyway! The penalty was probably the coaches' fault, on slow communication.

The Tigers remain in first place in the SEC West, and have a chance to take command of the division when the other front-runner, LSU visits next Saturday. Can LSU defensive coordinator Jon Chavis come up with a plan to stop Cam Newton? Thus far, Diaz, Steele, Johnson, Brown and now Robinson have failed to do that. Thus far, Newton has racked up 860 rushing yards, and 1278 passing yards. He's fast approaching the Auburn total offense season record of 3277 yards, set in 1997 by Dameyune Craig.

It's been a wild SEC season thus far. The SEC East is in total disarray after this past weekend's games. Florida now has 3 SEC losses, as does Georgia. It was South Carolina's division to run away with, till they let Kentucky come back. Auburn's 3 point win over the Cats looks pretty good, now! Every East team has two SEC losses. It's anyone's guess who comes out on top there. The last two weeks, Georgia's looked pretty good, although it was against bottom-feeders Tennessee and Vanderbilt. South Carolina owns the tiebreaker on Georgia, but if the Gamecocks can lose to Kentucky, they can lose to anyone. It's about that time of year that the Gamecocks begin their late-season slide, and this year may be no exception.

I am shocked that we beat Arkansas in such dramatic fashion. Now, the big game becomes LSU. It's Tigers vs. Tigers, in Jordan Hare, back on CBS. Go Auburn! War Eagle! Let's win it all this year.