Notes From the Stands

Share All sharing options for: Notes From the Stands 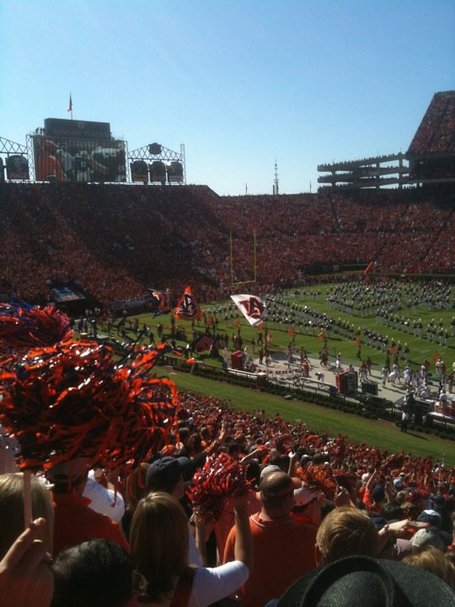 Note to self: Do not sit in east stands during day games with temps over 50 degrees if you can help it.

Saturday you couldn't have asked for a prettier day for football, except for it to have been a little bit cooler. Although mid 70s sounds fine, there's got to be a thing called the sunshine factorthat raises the temp when you are in direct sunlight. As I mentioned above, being in the east stands near the top of the lower bowl, we had the sun right on us the entire day. Four plus hours of direct sunlight totally drained me. Only after the sun started to fade on Arkansas's come-back hopes did the actual one recede behind the southwest end zone and put us out of our misery, just as Josh Bynes receiving efforts put Arkansas out of theirs. I kept envying the alumni side and the nice shade they got all afternoon, but at least I got to see the Jumbotron. Trade offs, trade offs, trade offs.

I'll be honest. The crowd wasn't as rocking as it had been for Clemson and Carolina. I think everyone knew it would be a score fest and didn't think it appropriate to get that rowdy until the final quarter or two. After the 3rd quarter where Arkansas dominated and poised itself to go ahead for the first time since early in the game, the stunt where our whole team trotted down to the southwest end zone to rally the crowd really got the whole stadium finally on it's feet and prepared to help the team bring home another come-from-behind-in-the-4th quarter win. I had never witnessed that event before, and at first, I thought it might be something illegal--reminiscent of what Georgia did against Florida in 2007--and looked for the hankies to come flying out. Regardless, it did fire both players and crowd up alike and set the tone for the final period for the Tigers to put the game away.

Watching the replay on Sunday as I always do, I picked up on many things that you couldn't see from the stands. Some of what I observed:

--No one in our section knew that Michael Dyer was partially injured. Everyone kept yelling for them to put him in the game, but I only saw him in for one play. By the time in got in late in the 4th, it was pretty evident in that TD run that he limped on into the end zone. I know he wanted to play sooo bad against his home state, but I have to question the wisdom of letting him risk it even once the game outcome was no longer in doubt. We will need his quick-cut ability badly against LSU. Mario Fannin is a step slower and although he made a valiant effort with 60 yards rushing, he kept getting tackled around the ankles from defenders on the ground.

--Bobby Petrino had balls of steel to keep throwing the ball deep with his backup QB Tyler Wilson and it's precisely that reason why he was always the antithesis of Tommy Tuberville. There are few coaches in America who when down to a ranked team on the road, would keep going for the deep ball time and time again. Thankfully, in spite of almost a half mile of yards, it didn't work and we got to knock that smug smile off his face for the first time since he returned to the college ranks.

--Speaking of Tyler Wilson, I don't think I've seen a better effort by a QB in relief ever than the one this kid demonstrated during quarters two and three. At one point he was like 16 of 17 with four TDs. Joe Montana couldn't have made some of the throws he was connecting on--deep ones, slants, timed patterns. From what I saw, that kid could start for virtually every team in the country. Eventually, his improbable start was caught up to by the law of averages and he began to make the mistakes that you would expect from a rookie backup on the road in a huge game like that. Malzahn has the connections back home in Arkansas. Wouldn't you love to have this kid--an Arky native--in the bullpen warming up for us?

--Arkansas wide out Greg Childs absolutely tore us up and was Cam-esque in his ability to play like a man amongst boys with 12 catches for 160 yards. Time and time again he victimized our secondary and was virtually unstoppable. Carolina's Alshon Jeffries torched us for more yards, but this kid will give me nightmares if he doesn't go pro after this, his junior year. Arkansas's receiving corps simply must be the best in CFB today.

--What was the deal with the bromance between Gary Danielson and Verne Lundquist with referee Penn Wagers early on? They must have called out his name at least five times in the first quarter, undoubtedly foreshadowing pending officiating doom to come. Who does that? They may mention the guy's name once at the beginning, or quickly run down the whole officiating crew, but something strange was going on--the kind of stuff conspiracy theorists stay up all night working on. SEC coaches are barred from criticizing the officials, but Bobby Petrino got one good point across at the half: 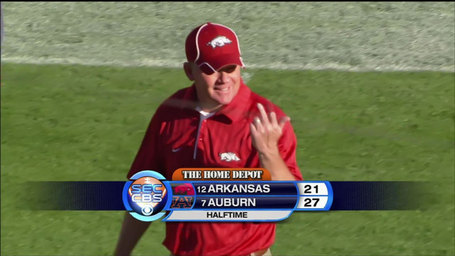 --Speaking of officiating, there were some controversial calls that many have brought up. The point about the replay officiating is that there must be a single camera shot that shows irrefutable evidence that a call can be overturned. The angles on a lot of these calls were very tough and didn't show much in themselves, but when placed with additional shots, showed a preponderance of evidence that could possibly reverse a call. That isn't sufficient under the current rules, and I do think Arkansas did probably get hosed on a few calls. But that's part of the game and you better coach and play your way around it.

--Both Danielson and Lundquist were basically laughing at the defensive coordinators for both teams during the whole second half. Once the gauntlet had been thrown down and the score fest was on, both defenses took a pounding. Auburn couldn't get theirs off the field much in the 3rd quarter. Ironically, Arkansas's defense was ranked 15th in the country in scoring defense before this game. Our record-breaking 65 point jaunt was enough to knock them back to 56th in the national rankings. Don't gloat, however. Ours is ranked 63rd, although we remain 6th in points scored. Sometimes the best defense is a better offense.

--My blue collar player of the game Saturday was Kodi Burns. Not only was he throwing some key blocks down field most of the game, but he caught two incredible drive-sustaining balls at critical moments. Heck, he almost connected on a TD throw into coverage in the end zone on a fake option. Time and time again I've heard fans heckle Burns and ridicule why the team won't throw to him even as defenses leave him open, but he had a big day on Saturday and I'm proud for him. I wish they'd line him up in the wildcat once or twice a game for good measure. With him being a threat to throw it, he could provide a good lure to get defenses to open up the run a little more.

As we posted Sunday, BCS rankings are in and that means that BCS criticisms and crying are in, too. More on that subject to come later this week. War Eagle!