Share All sharing options for: Defense Wins Championships! Or So I'm Told 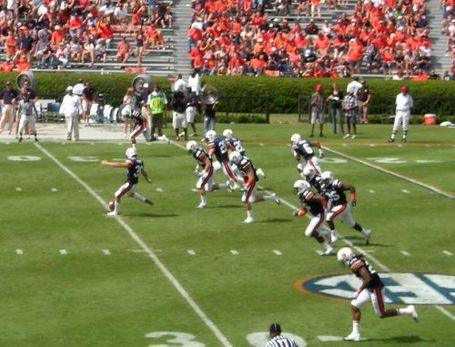 Two factors were evidently better about this Auburn team than at any point last year. Offense and Special Forces, the term Coach Boulware uses for his hardest playing special teams players every week. While we can all see the huge importance special teams play in putting the defense in good field position, we can also see our defense has a difficult time keeping opponents on their side of the field, much less with three and outs.

In 2004 Auburn's defense allowed an impressive 104 yards per game rushing, in 2009 it gave an exact 50 yards per game more. So far, through the 2010 campaign our defense has only allowed 101.7 yards per. A dramatic improvement, considering the talent we have faced. This will be a key factor in the upcoming battles with the three teams we have losing streaks with, LSU, Georgia, and Alabama. All like to run to set up the pass.

Zac Etheridge is a force in run stops, as is Josh Bynes, but give credit where it's due. Ted Roof's goal for 2010 was to stop the run, and try to limit the amount of big plays teams can have against our secondary. Coach Chizik mentioned this several times in press conferences before  the season, and since it got started. Thus far this year it's worked to perfection. Arkansas aside, nobody else has consistently been successful going deep on Auburn.

More after the jump..

The most significant aspect of any college football program is the recruiting. Auburn has done exceptionally well with the class and a half it has signed under Coach Chizik's watchful eye. The two years leading up to the Chizik hire saw Auburn fall woefully short on the recruiting trail. Nowhere is that more evident than at the defensive back positions.

The old style of recruiting was to get whomever they wanted and coach 'em up. That has left Chizik and his defensive staff in a situation to do none other than that, at least until they can find the type of personnel they deem  as fit.

Only 2 of the 4 star DB recruits that Auburn has signed, over the last four classes**, are still with Auburn. They are Mike McNeil, and T'Sharvan Bell. No less than 3 DB's rated 4 stars have left the team. That makes our secondary look like a puzzle with a couple of pieces missing.

We have a converted 3 star running back now playing corner, and a 3 star DB playing linebacker. For all the pieces to fit in the right place , they must be cut correctly, or our aforementioned puzzle looks a little wacky.

Coach Lolley said earlier this week that Auburn tried multiple variations, and looks to try and confuse the Arkansas QB's, but you could tell they were really well coached. They kept making the right reads and making the play, until right at the end, when the defense shut them down.

I am extremely proud of this Auburn team. They never give up, and they have not quit in a game yet this season. Part of that has to be coaching. For one thing, we are we are being mentioned in the National Championship talk, somebody is doing something right.