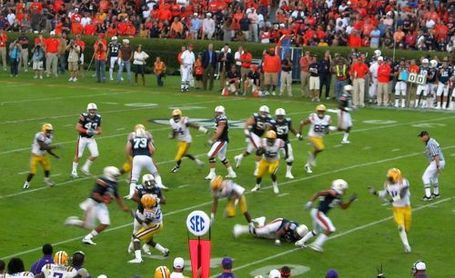 War Eagle, everybody! The Auburn Tigers ran all over LSU's top-ranked run defense, 24-17! It's time now for the Acid Reign report on the big Auburn win! I was covering this one live in Jordan Hare Stadium, and what an electric atmosphere it was! From the eagle flight a mere 10 feet over our heads, to the F-14 jet flyby, to the magnificent fall weather, it doesn't get much better than this! 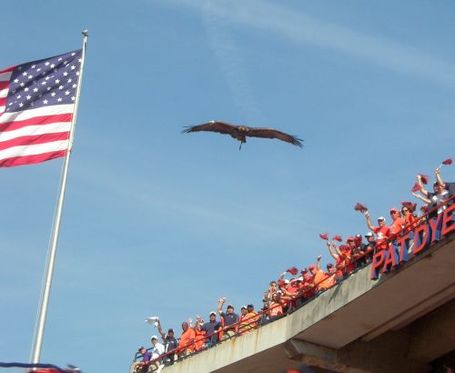 Can't get enough of that eagle flight!

LSU came in flying high at 7 and 0, with the league's number one defense. With abundant playmakers on offense and outstanding special teams, the Auburn Tigers faced a tough test. The tone was set on Auburn's second possession, set up by a Zach Etheridge interception. Auburn ran the ball on 5 of the 6 plays, and only the 1 yard TD plunge by Newton was shorter than 9 yards. Newton slashed for 10, then T-Zach reversed for 12, Newton screened it to Lutzenkirchen for 6, Newton busted up the middle for 9, then Dyer crashed up the gut for 16 to put the ball at the one. Newton trucked over Brandon Taylor for the one-yard score, and notice had been served. The Tigers were going to run over LSU!

For all the bad press LSU fans get, I had nothing but good experiences talking to every purple-shirted person I could Saturday. I did hear a lot of "Miles has to go" talk. The LSU die-hards are NOT happy. There was an LSU fan right in front of me, totally surrounded by orange. I hope us section 32, row 24 folks weren't too hard on him! My hat's off to the LSU contingent. They made a lot of noise. We were sitting behind the LSU bench, and I know those guys appreciated the support.

Cam Newton solidified his lead in the Heisman trophy race with a twisting, dodging, speed-burning 49 yard TD run in the 3rd quarter. Newton dragged All-American corner Patrick Peterson the last 5 yards on the carry. It wouldn't be the last play Peterson came up short on. Onterrio McCalebb outran Peterson on a 70-yard game winning jet sweep. I spent much of the past spring bemoaning McCalebb's added weight, lamenting his apparent loss of speed. Well, I was dead wrong! If you can out run the LSU defense on a sweep like that, you've definitely got a whole lot of speed! What an amazing play! The stadium went berserk on that carry! No offensive analysis would complete without praise for Auburn blocking across the board. The line was incredible! Ryan Pugh took on LSU's amazing defensive tackle Drake Nevis, and held him to two tackles and one quarterback hurry. Auburn pulls both guards on a lot of plays, so Pugh was left alone to deal with one of the SEC's best tackles. No problem! I think it's time for Pugh to start getting some consideration for some big-time awards. Another guy I'd like to single out as an unsung hero is Eric Smith. He's getting neither carries nor catches this year, but he's really taking out defenders right and left! I don't know how many NFL teams use fullbacks anymore, but this guy's Pro-Bowl material!

In comparison to LSU's day, Auburn special teams were very pedestrian. Coverage lapsed back to 2009, as LSU picked up 24 yards per kick return, and 9 yards per punt return. We were saved by a couple of timely block in the back calls on the visitors from the bayou. There should have been several more called. Craig Sanders got hit from behind on every kickoff. Quindarious Carr didn't fumble, but he didn't try to field anything. We let every LSU punt hit and roll, and got pinned on the one yard line repeatedly. This allowed LSU's Derek Helton to have a career day punting. Helton averaged 53.2 yards per punt, and downed 4 out of 5 punts inside the Auburn 20. If you're wondering how Auburn gashed LSU for 448 rushing yards and only managed to score 24 points, there's your answer. It's hard to do much of anything when you're pinned at your own 1 yard line. Carr's GOT to start signaling fair catch and taking some of these things in!

The Auburn defense stepped up its play. You can't say enough about the heroics of tackle Nick Fairley and linebackers Josh Bynes and Craig Stevens. Fairley's a monster. He's got that MMA body-slam thing down! He'll get your QB off their feet, whip 'em over and land on top with extreme violence! Teams can ring up some passing yardage against this Auburn defense, but QB's have paid the price this year. Much maligned LSU quarterbacks Jordan Jefferson and Jarrett Lee deserve some big praise for shaking off multiple monster hits. It's also worth noting that the incompetent SEC refs let LSU snap the ball and score a TD before half after the play clock had run down to zero. It was on zero for at least two clicks before the ball was snapped. They also seemed to have a propensity for giving LSU "TV timeouts" at critical times.

After Auburn's performance against Arkansas the week before, no one expected much of the Auburn secondary. The fan next to me had particularly harsh words for cornerback Neiko Thorpe, who wears number 15. "Here's your winning LSU gameplan. Run it at 15, throw it at 15. Run it at 15, throw it at 15. Kick the extra point!" LSU went after Neiko Thorpe repeatedly, and their offense got closed out more often than not. Thorpe's our most physical player in the secondary. He may get beat occasionally, but he's going to be in position to make a play, and he doesn't miss too many tackles! 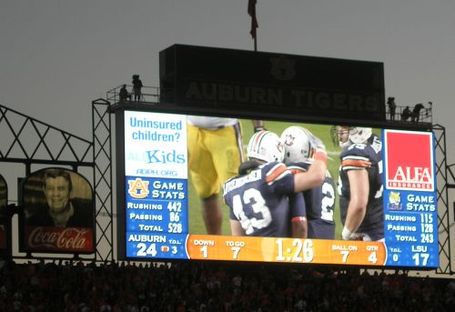 It's all but over! Let the celebrating begin!

Defensive Line: B+. Nick Fairley was a monster, but we have a few issues elsewhere. Points off on Nosa Eguae jumping offsides. We got little production from strongside ends Eguae and Michael Goggins, with only one assist and one QB hurry. We lost outside contain on Jefferson repeatedly, allowing him to lead LSU rushers with 74 yards, despite being sacked twice.

Linebackers: B+. There were a few failures to wrap up, Darren Bates. On the other hand, you can't ask for more from Josh Bynes and Craig Stevens. They made a lot of big plays on speedy LSU playmakers. LSU kept trying to get big play specialist Russell Sheppard loose, and Bynes and Stevens slammed the door. Sheppard ended up with a mere 29 yards on 6 touches.

Secondary: B-. We can credit the secondary for some improvement in this one, but an honest opinion is that LSU dropped a lot of balls, and missed some throws. Zach Etheridge's interception should have been caught for a 1st down in the red zone by Reuben Randle. As has happened all year, we gave up 10 yards a pop on screens to the outside, at least for a while. Both Thorpe and Washington seemed to get tired of it, and moved up and made plays at the line. Even freshman Chris Davis got in on the act, breaking up a short pass. Coverage downfield was a lot better. We did a good job of making the LSU quarterbacks go to their second or third read. With our pass rush, those extra nano-seconds can result in some serious mayhem in the backfield!

Punt Returns: D-. We did nothing here, and let 'em roll. I'll give a passing grade due to no turnovers, but that's about it.

Kick Returns: A-. We only had two, but Washington made 26 yards on his, and McCalebb got 33. Those are pretty good numbers!

Place-kicking: C+. Wes Byrum hit one of two from roughly the 40-yard range, which is average. So is our 63 yard kickoff average.

Offensive Line: A. What a dominant performance. Ryan Pugh was absolutely awesome, but he wasn't alone. Good blocks were made repeatedly. When the ball carrier dives into the line, is immediately stopped, and you've picked up five yards, you're really blowing them off the ball! Minor points off on an "ineligible downfield" and a hold; both on Brandon Moseley. Moseley atoned, though. He made some ridiculously good blocks, including a critical back-side wall-off on McCalebb's 70 TD jaunt. Without that block, Cam and O-mac get rocked trying to make the handoff.

Receivers: B. I give a grade this high on blocking. Kodi Burns continues to be a head-hunter out there! We had more drops in this game than any all year, though. Several times in the first half, we went under center with a quick snap. When that happened, both LSU corners would blitz, leaving the outside receivers to the safeties. Many folks think that the LSU coaching staff are idiots, but they had this thing schemed well. Give LSU credit, their safeties closed very quickly! But Adams, Carr and Zachary all dropped passes on that play. Newton put those exactly where he had to, making superbly accurate passes, and we didn't come up with 'em.

Running Backs: B+. Letter grade off on the Fannin fumble. I don't know what to say, on that. I thought Newton had fumbled it, during the game. Should have known better. Even banged up, Michael Dyer is an outstanding runner. He's got great vision and balance. He bailed us out of several jams with visionary, tough inside running. Onterrio McCalebb is a weapon on those fly sweeps. His presence totally alters the defense. Not many players can speed-burn the LSU defense for a game winning touchdown! I can't say enough about the blocking of Eric Smith and Phillip Lutzenkirchen. You'd have to go back to 1993 to find a pair of lead blockers this good on an Auburn team!

Quarterback: A. I did count off for the missed 4th down throw. Adams was wide open, and Cam missed him. On the other hand, Cam made some great tosses into coverage, and uncharacteristically, our receivers didn't help him out. His completion percentage and yards per pass numbers should have been a lot higher. Cam had his best game of the year running, and he did it against a monster defense. I absolutely love Cam's enthusiasm! I was particularly amused listening to Cam's interview on the Tiger post-game show. They REPEATELY tried to get him to talk about his mind-blowing runs, but all Cam would do is credit his line and blockers. What a great example Cam sets! I'll say it again, treasure these times, Auburn fans! We may never see another one like Newton.

As fans, we've tried to take things one game at a time, especially since every SEC game seems to be a nail-biter till the end. Still, I've started really watching the scoreboard on Saturdays, and am ticking off the undefeated teams that go down. Add the two Big-12 teams from Oklahoma to that list. We were cheering against TCU, cheering against Sparty, etc. I guess that's a result of the 2004 BCS snub. Can this really be happening? Are these Tigers making a championship run?

The Tigers still have a tough road to hoe. Ole Miss won't be easy in Oxford next week. Georgia finally seems to be playing up to their preseason potential. Out of all of Auburn's opponents, I was more worried about LSU and Georgia than anyone. I fully expect another tight November game against the Bulldogs. The Iron Bowl is ALWAYS tough, for Auburn. In my lifetime, there have only been two easy Iron Bowls: 1969, and 2005. Won't get one this year, I don't think. Bama looked pretty good against the Vols, at least in the second half.

War Eagle, Tiger fans! We are 8-0, and remain unbeaten atop the Southeastern Conference! My hat's off to the outstanding job head coach Gene Chizik and his staff have done with this team. Thus far, this has been an amazing season. I have a ton of respect for the amazing will and perseverance this team has displayed. I believe it will carry us far! Yes! It's REALLY great to be an Auburn Tiger, this year!