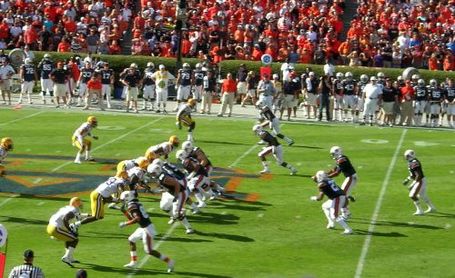 Cam Newton will crank up the big show again!

War Eagle, everybody! It's game week again, for the 9th week in a row. Auburn has a rare road game this week, in Oxford against the Ole Miss Rebels. This one will be played at 5:00 PM Central time, so you'd better eat your supper early! Ranked number one in the BCS standings this week, the Auburn Tigers will have a big target on their backs, as the Rebels hope to spring the upset.

Ask most folks about Ole Miss this season, and they'll bring up the early losses to Jacksonville State and Vanderbilt. The fact is that Ole Miss has steadily improved this year, and may be playing better right now than at any time last season. With transfer Jeremiah Masoli at the helm, the Rebel offense has put up 55 against Fresno State, 42 against Kentucky, and 24 against Arkansas. The Rebels can score some points. Masoli may be the best dual-threat quarterback we'll see all year.

It's not all Masoli on the Rebel offense, though. The Rebels are third in the league in rushing offense, with 211.1 yards per game. Masoli picks up only 57 yards of that. Tailback Brandon Bolden is 7th in the league in rushing, averaging 79.9 yards per game. Masoli has also passed for 1260 yards, with 10 scores and only 6 interceptions. The Rebels have a receiving weapon in senior Markeith Summers, who's averaging over 22 yards per catch, and leads Rebel receivers with 4 touchdowns. The Ole Miss offense has given up only 7 sacks all season, and has turned the ball over 12 times. By comparison, Auburn has given up 13 sacks, and has 11 turnovers. The key matchup for the Rebels is the interior line vs. Auburn wrecking ball Nick Fairley, who leads the SEC in tackles for loss and is second in sacks. The middle of the line for the Rebels consists of true freshman center Evan Swindall, sophomore guard A. J. Hawkins, and true freshman walk-on guard Patrick Junen. I think Masoli will have to keep on running, this week!

Special teams are a mixed bag for Ole Miss. New place kicker Bryson Rose has been a surprise, as he's among the SEC leaders having hit 8 of 10 field goals, and all of his extra points. Auburn's Wes Byrum is 12 of 16. Jesse Grandy, who returned a kickoff for a score against Auburn last year, is averaging over 20 yards per punt return, including one touchdown. He's only returned 8 punts all season, though. Ole Miss punt and kick coverage units have been suspect. The Rebels give up 17.3 yards per punt return, and 23.5 yards per kick return. Punter Tyler Campbell has a tremendous 45.9 yard average, but he may be out-kicking his coverage.

Where Ole Miss has had problems this season is on defense, particularly in the back seven. The Rebels are dead last in scoring defense, giving up 32.0 points per game. They are 10th in total defense. Injuries and youth have played a big part. The news for the Rebels this week is that safety Damien Jackson is doubtful this week with a knee injury. He's second on the team in tackles. Despite a strong defensive line led by superb tackle Jerald Powe, the Rebels have only picked off two passes all season. Rebel defensive coordinator Tyrone Nix will have some decisions to make. In previous weeks, Arkansas brought pressure on the Auburn offense, and was scorched to the tune of 65 points. LSU played read and react, and were steam-rolled for 448 rushing yards.

There's no reason not to expect a high scoring game again this week in Oxford. Auburn's top-ranked scoring offense takes on the Rebel last place scoring defense minus a top tackler. The Rebels bring a scrambling quarterback to the game, which Auburn's been hurt by earlier in the season. The Tigers are 8th in scoring defense, while the Rebels have the #6 scoring offense. Both teams have some holes on special teams. As always, turnovers will play a role. The two teams are remarkably close statistically in turnovers, averaging about one and a half a game. I think that if Auburn takes care of the ball in this game, they'll outscore the Rebels by a comfortable margin. The Tigers have some overwhelming advantages on both sides of the ball, if they take care of business.

As always, we'll have an open thread up on Saturday morning, and we'll be back in play by play mode at gametime! Be sure to drop by, sound off, and enjoy the fun! War Eagle!