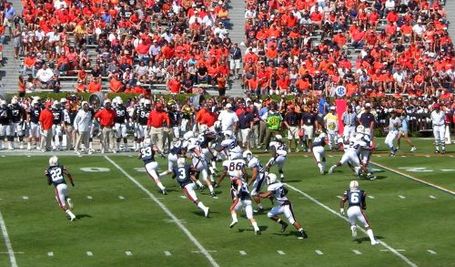 Good morning and War Eagle everyone! My oh my what a difference a week makes. Just last Friday I had a post up that was titled "Defense Wins Championships-Or So I'm Told" , the irony of which I'll get to in a moment.

Auburn was in fourth place in the BCS rankings last Friday, there were mutterings of the ghosts of 2004 being heard all over the South-land. The Auburn family had been burned previously, and lessons learned about the BCS, pollsters, and the computers rankings meant a total lack of respect for what our Tigers had accomplished. Alas, after 4 straight SEC BCS Championship game wins by our Conference, any SEC team with the schedule we have, and with the victories this team has, would get the respect it deserves.

Fast forward back to the present, and we see that indeed quality defensive football can and will win games in this league. The ironic part was that it was Auburn's defense that played exceptionally well last week, and not the highly ranked LSU squad. Especially when it counted the most, in the second half. Keeping the maligned LSU attack to only 3 first downs and not allowing any 3rd down conversions, was a beautiful sight for these old eyes. My hats off to these guys, they have heard the fans talking, and set out to prove us wrong. I'll refer to Coach Rocker on this one. His favorite question to his guys after they have a good play is "That was good, can you do it again?"

The vaunted LSU defense virtually littered with future NFL prospects was mauled, and manhandled by the Tiger interior lineman, they were out skilled by Auburn's wide receivers, who constantly stayed on their blocks with gritty determination, simply out played by the entire Auburn team. Minus the special teams-aaarrgggh! An offsides on a kick off? Really?

According to Coach Jeff Grimes, Auburn's running game is down right contagious! "It's cyclical I think, when the offensive line opens up holes, the running backs take advantage of this and run hard. Then they get downfield, and the recievers are still blocking, they run even harder. When the linemen get downfield and see that everyone is trying that hard for success, they block with that much more confidence and effort, and the holes get a little bigger, and so on..."

When asked about the satisfaction of putting up rushing numbers like the Tigers have the last four weeks, Coach Grimes stated "I've never been a part of anything like this, not to this extent". Guess what coach, neither have we. The good thing is nobody is ready to see this amazing rushing offense come to a halt. Not that wear Orange and Blue, anyway.

One piece of important news ran across the wires this past weekend virtually unnoticed. The NCAA, the NFL, and the NFL Players Union have agreed, in principle, to take determined steps to eliminate the amount of contact an agency and their runners have, with college football players. Once more details are released, and confirmed we will get the news to you as quickly as we can.

The Ol Miss Rebel-Bears won't lay down for us, we must go into VHS in Oxford, MS, take what we are so hungry for, another step on the road to a championship.

Those metaphorical steps are what we are all so excited about. They are a perilous path that must be navigated with skilled precision, and patience. Fortunately for the players, Coach Chizik has been on that path more than once, and knows the way.