Share All sharing options for: Bear Hunt in Oxford! 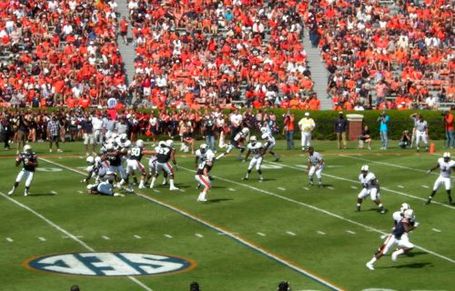 Will the Tigers air it out against a suspect Rebel Secondary?
Auburn vs. Ole Miss, Open Thread.

War Eagle, everybody! It's time now for a rare road game for the Auburn Tigers. This one will played in the confines of Vaught-Hemmingway Stadium in Oxford, Mississippi. Auburn takes on the Ole Miss Rebels in what should be an exciting, high scoring game. Both teams have issues on defense, and dangerous offenses. Auburn comes in undefeated and ranked number one in the BCS standings. With the Rebels standing at 3-4, Ole Miss needs three wins to go bowling, and they'd love nothing more than to get one knocking off number one!

Today should be another fantastic fall day for football in the south! Temps should fall into the 60s during the game, and there should be clear blue skies as the sun sets in Oxford late in the first quarter. This game will be televised at 5:00 PM Central time on ESPN-2.

We'll be here for another great day of college football, and we'll have a play by play at gametime. As always, please drop in and sound off! War Eagle, folks! Let's blast the Rebels!