Tigers Race Past the Rebels!

Share All sharing options for: Tigers Race Past the Rebels! 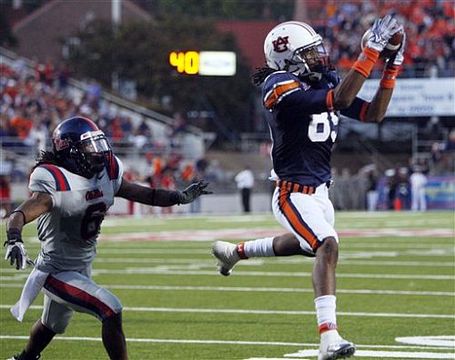 War Eagle, everybody! It's time now for the Acid Reign Report, on a big Auburn road win. On ESPN's themed "Roadblock Saturday," the Ole Miss Rebels were little more than a speed bump for the streaking Auburn Tigers. The 51 points Auburn put up in the 51-31 win were the most the Tigers have ever scored against the Rebels. Ole Miss brought out uniform tricks, 3-D glasses, noise-coaching, lots of Wild Rebel offense, and had an entire defense spy Cam Newton. A record crowd as in attendance at Vaught-Hemingway Stadium. None of it mattered, as Auburn continued to make 500-yard offensive games look easy.

The Rebel defense had at least a half dozen run defenders watching Cameron Newton's every move, and they limited him to 11 carries for 45 yards. There was a price paid in the Rebel secondary, though. The Tigers completed 19 of 25 passing attempts, for 229 yards and three touchdowns and no interceptions. The Rebels shut Newton down on the ground, but always taking the quarterback on the option is not a good idea, especially when your opponents have guys with the speed of Onterrio McCalebb and Michael Dyer. The two backs spearheaded a rushing attack that rolled up 343 yards on 46 carries. That's the fifth straight 300 yard rushing game against SEC defenses, a school record. On the day, Auburn averaged 9.1 yards per pass, and 7.4 yards per rush. The only turnover was a botched handoff in the second quarter.

Despite a limited game on the ground, Newton did nothing to hurt his Heisman Trophy chances. On the day, Newton had 45 rushing yards, 209 passing yards, and a 20 yard touchdown reception with a defender draped over him. Cam even made a touchdown-saving tackle after the handoff fumble. Finally, Newton was at the controls of an offense that totaled 572 yards and only punted once. For the season, Newton has accounted for 2737 yards and 30 touchdowns in nine undefeated games. He's thrown only 5 interceptions and lost one fumble, if you count the missed handoff yesterday. I'm not sure that wasn't on McCalebb.

For the most part, Auburn put the "special" back in special teams. Wes Byrum had a perfect day place kicking, and he split time kicking off with Cody Parkey. Both kickers boomed some high, deep ones. Auburn's kick coverage was stifling, holding the Rebels to only 19.2 yards per return. Demond Washington tripped himself a couple of times on the artificial turf, but turned in a back-breaking touchdown return in the 2nd quarter. Washington broke the single-season kick-return yardage record set by Tristan Davis. Washington now has 30 returns for 806 yards on the year. He leads the SEC in kick return yardage by 176 yards over second place Brandon Boykin of UGA. Only the punt units lag, and it's fortunate that Auburn doesn't punt much. Steven Clark managed one high punt that was fair-caught, but I don't think he's managed a 40 yarder all year. Quindarius Carr fielded one punt, and lost yardage on it.

After a stellar effort against LSU, the defense took a major step backward against Ole Miss. The line could generate little pressure, and allowed Ole Miss to bite off hunks of rushing yardage at 7.0 yards per carry. There was not a single sack, nor quarterback hurry in the stat sheet for the Tigers. Outside contain was non-existent for much of the day, as Masoli and Ole Miss runners turned the corner repeatedly. There were coverage issues early, but the Tigers got better as the game went on. What's that bit about safeties being deeper than the deepest man, especially in cover-two? Ole Miss ran the post and the go route right by Auburn safeties numerous times. Kudos to freshman Chris Davis, who helped shore things up in the middle in the second half. Auburn single-covered Ole Miss on the outside a lot, and generally Neiko Thorpe and Demond Washington did pretty well. Washington was beaten for one score, but redeemed himself with an interception on the two yard line.

Defensive Line: C. Prior to this game, I hyped an apparent mismatch inside in this one. The young Rebel linemen acquitted themselves well. Fairley and Clayton made some plays, but they didn't take over the game. We simply need more out of our defensive ends. They neither bring pressure nor contain outside with any consistency. I guarantee you that on a Bama off Saturday, Trent Richardson watched those Ole Miss sweeps, and he's licking his chops right now. Kudos to Zach Clayton for running down a breakaway run on the sideline, and getting the runner from behind.

Linebackers: C. Even the normally reliable Josh Bynes had a difficult game this week, totaling only two tackles. Ole Miss did some double team blocks on Bynes, figuring correctly that the rest of the back seven would struggle to make plays. The Tigers handled the inside power runs, but couldn't get to the corner.

Secondary: C. I give a grade this high due to good coverage on the outside for the most part. Ole Miss tried to pick on Washington and Thorpe, and had some costly mistakes for only a little bit of production. I just don't understand how 4th and 5th year safeties let receivers blow past them on the post. Is that an assignment thing? When the other team runs a speed sweep, a safety should at least have a shot on the sideline. On a day when the opponent piled up 407 yards, Etheridge and McNeil were in on only 8 tackles.

Punt Returns: D-. There were five Ole Miss punts, only one fielded, for a loss of two yards. These weren't short punts, either. Ole Miss averaged 40 yards per. We're a bad, bad punt return team.

Kick Returns: A. The Demond Washington show was fun to watch, but a lot of it was poor coverage. The TV guys made a big deal out of Rodney Scott tackling the wrong return man, and there were a lot of strange things like that. Guys would drift out of their lanes without even being blocked at times. Ole Miss looked very undisciplined, and had the turf not tripped Washington up, he might have scored three times!

Place-kicking: A. I won't give an A+ till we generate more touch backs, but this was a pretty excellent effort by both kickers. Each kicked 5, and they were consistently high and inside the 5 yards line. Parkey's average was reduced to 61 yards because of an intentional squib kick before half. Wes Byrum hit all of his place kicks, including a 48-yard bottle rocket field goal in the third quarter.

Offensive Line: A. Some folks will question this grade with Newton gaining only 45 yards on the ground, but looks can be deceiving. Ole Miss basically had the whole linebacking corps AND the strong safety spying Newton. He wasn't going anywhere up the gut. The line opened some big holes, allowing the running backs to pile up big yards. There were two sacks given up, but Ole Miss had to bring a LOT of players to do it. The thing about this line is that there are no weaknesses. Even newcomer Brandon Moseley is playing great. There's nowhere you can put a defensive lineman one on one and expect him to make plays. In fact, if you do get into the Auburn backfield as a defensive lineman, you were probably intentionally let in. Auburn ran a nasty trap play on Gerald Powe several times. He'd come crashing through right at the handoff, only to get blindsided by a pulling Mike Berry.

Receivers: A. These guys atoned for their performance a week ago by catching nearly everything that was thrown their way. Ole Miss tried to cover them one on one, and it was exploited beautifully. Adams, Zachary, Blake, and Burns all made multiple catches. Coverage is a real headache for UGA and Bama, after seeing this one. Again, we had dynamite blocking down field. On McCalebb's TD sweep, Adams and Zachary pancaked two guys on the sideline. These guys dominated. Kudos to Kodi Burns on the TD toss. He set his feet well, and it paid off on that throw to Newton.

Running Backs: A. I'll count off a little on a couple of missed blitz pickups. Also, they telegraphed that throwback play to Neil Caudle that was blown up for a big loss. Those are minor quibbles, though. McCalebb and Dyer ran well, and carried the load to the tune of 9.3 yards per carry. 30 carries between them, 279 yards will win a lot of football games! Eric Smith continues to be a beast of a lead blocker. Right now, I'd say he's the best blocking fullback in the league. I'm putting out an APB on Phillip Lutzenkirchen. Didn't see him after the first quarter. I hope he's not hurt...

Quarterback: A. We'll count off a little for missing back to back post passes to Emory Blake right before the half, but Cam had a solid day, taking command of the passing game. The critics say Newton is locked in on Darvin Adams, but Cam spread the ball around well, utilizing all of his receivers this day. Again, you can win a lot of games with a guy that averages 9.1 yards per pass with no picks and a 75% completion percentage.

Instead of overlooking the Rebels, the Tigers cruised into Oxford and took care of business. This team plays on a remarkably even keel, and will have a great chance of winning no matter who the competition is. I believe that this the first time in my lifetime that Auburn has actually won a game while they were ranked number one in the nation! War Eagle!

The Tigers catch a bit of a break this next weekend, at Homecoming against the Chattanooga Moccasins. The Tigers should not overlook this FCS Southern Conference team, though. The Mocs had a five game win streak broken yesterday in a 49-35 loss to Elon. This team has the offense to give Auburn problems. They are led by former Tennessee gunslinger B. J. Coleman, who's piling up some big yards through the air. Coleman passed for over 300 against Elon. Where the Mocs have problems is on defense. Elon gashed 'em for 490, which doesn't bode well against the steam-rolling Auburn offense.

I believe the Tigers will follow a similar gameplan to last year's Furman game. They'll play the starters and work on problem areas for a half, then turn it over to the subs in the second half. We may see another 63-31 game, too. War Eagle, folks! Let's enjoy another couple of week atop the BCS standings! Life is certainly good for us Tigers!