Share All sharing options for: Tigers Seek Vindication in Lexington! 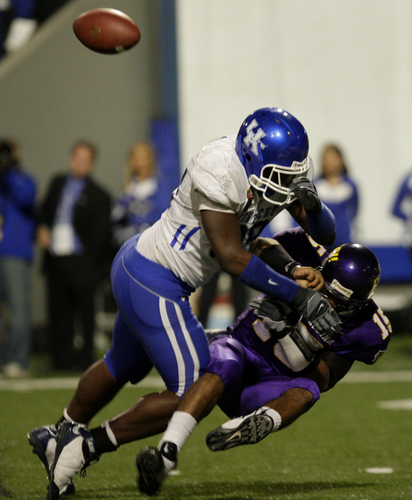 Micah Johnson, we will not miss you!

War Eagle, everybody! Saturday night, Auburn tries to gain a measure of revenge for its most disappointing loss of last season. The Tigers take on the Kentucky Wildcats in a 6:30 PM Central matchup on ESPN 2. The weather should be perfect for football, as sunny skies are forecast for Lexington with a high of 82 degrees. Temps should fall through the 70s and upper 60s as the game progresses. It's been dry and mild all week in Kentucky, and field conditions should be great.

Examining the performances of the teams, both have mangled a pair of cupcakes. Both have beaten a BCS team out of conference. Both have played two SEC games, including a Mississippi team. The league is where performances have diverged. Auburn has edged a couple of bowl contenders to remain undefeated, while Kentucky has given up 90 points in losses to Ole Miss and Florida. I could opine that Clemson is a better opponent than Louisville, but I won't after Clemson's lie-down against Miami last weekend. Clemson is the perennial underachiever in college football. Auburn does not have a game against front-runner Florida on its resume, but neither has Auburn played a team that lost to Jax State.

These stats show Auburn being slightly more potent on offense, but almost twice as likely to turn the ball over. The disparity between the teams is bigger on defense. Last season, Auburn fans learned what happens when you give up over 4 yards per rush. For the Tigers, it was the worst defense in Auburn history. This year's Kentucky squad is giving up 4.5 yards per carry, compared to Auburn's 2.6. When you toss out the non-conference games, the table takes on a different look:

Turnovers even out against SEC competition. The bottom line is that Kentucky has not run the ball as well, nor stopped the run the past two weeks. The reason are new faces on the offensive line and front seven on defense. Meanwhile, Auburn returns most of the principal players in both of those areas, and Tiger tackle Nick Fairley has seriously upgraded his game. In addition, Auburn is getting a lot of quality defensive line minutes out of freshmen, and previously marginal players like Dee Ford and Zach Clayton.

Two things killed Auburn against Kentucky last season: penalties and missed passes. Auburn committed ten penalties, and Kentucky none. This season, Auburn is averaging 49.6 penalty yards per game, and Kentucky is averaging 53.6. Hopefully that will stay even Saturday.

None of these stat comparisons mean that Kentucky is helpless in this game. As long as the Wildcats have Randal Cobb and Derrick Locke, and are within striking distance, I won't rest easy! We saw what happened with a lead last year. This season, Cobb is averaging 9.3 yards per carry, 12.0 yards per pass, 13.4 yards per reception, 12.2 yards per punt return, and 20.9 yards per kick return. He has accounted for seven touchdowns. He's a danger every time he gets his hands on the ball. Derrick Locke has a great combination of power and shiftiness. He's averaging 108 yards per game on the ground, plus another ten or so in receiving.

Comparing the quarterbacks, Kentucky senior Mike Hartline has hit 102 of 160 passes, for 1222 yards, 8 touchdowns and 3 interceptions. Auburn's Cam Newton has connected on 57 of 87 passes, for 928 yards, 12 touchdowns, and 4 interceptions. Net Yards per pass: Hartline rates 6.7, and Newton rates 8.4. Where Auburn gets a real edge is on the ground. Hartline has 9 rushes for 36 yards and one touchdown. Cam Newton has rushed 76 times for 474 yards and 5 touchdowns.

One last reason for renewed hope is that of Kentucky's top 5 tacklers in last year's Auburn – Kentucky game, 3 have gone on to the NFL. In particular, the Wildcats will miss big 260 pound linebacker Micah Johnson, who had 14 tackles against the Tigers last season. Those missing three players, Micah Johnson, Sam Maxwell, and Paul Warford combined for 30 tackles against Auburn.

We'll have our usual open thread up Saturday, so please drop by and enjoy it! I'll be back at the keyboard again for the game, after a two week absence. I can't wait! War Eagle!