Share All sharing options for: "I Don't Even Care" - Josh Bynes 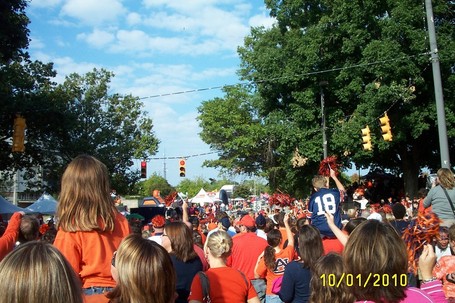 When asked about Auburn's national ranking the senior linebacker stated his response with firm and steely resolve.

This team has the mindset you would love for every Auburn team to have. Forget what the press writes, it doesn't matter.

What I write? pfft, it doesn't come close to making a difference to these young men.

Listen closely to the interviews after the games, the players all to one accord, are saying "we have a lot to improve on" - Lee Ziemba, or even better "I think I played good, but I need to work on some things to help the team out more" - Jake Holland. The best response after last weeks game, came from Nick Fairley. He's only the SEC's sack leader. "I've got a lot of room for improvement, you know, work on my technique, stay lower, get my hands better" When asked about the defensive line play as a whole Nick said "We did okay, we just have get in the film room, and work on fixing our mistakes"

Last Saturday, the defense allowed only 38 yards rushing, and didn't allow a touchdown. For the season, the longest run from scrimmage by an Auburn opponent is only 21 yards. Impressive numbers indeed considering some of the teams we've played.

To a man, each Tiger player has been asked about the feeling of being 5-0 this season vs. the same record last year at this point. The response has been unanimous, "that was last year. We are worried about this year. We have to stay focused, and work on the film of each game to get better".

The one item that has really been a thorn in the side of this Auburn defense has been open field tackling. Josh Byneshas been vocal about it. Defensive Coordinator Ted Roof has said all along "We've got to improve on our tackling techniques, wrap up better, better pursuit angles, that sort of thing".

This team, this 2010 version of the Tiger Defense is a special group. They encourage the offense when they have the ball, and they play together, as team, no one individual is any more special that the next. Including the back up personnel.

Last Saturday Antoine Carter sat out and did not play. Did he just hang out and enjoy his day off? NO! He watched and coached Dee Ford throughout the day. Teamwork has been a staple this year. There is your shining example of what teamwork is.

I was asked the other day about favorite Auburn teams, and of course I couldn't keep qiuet, I stated the 1983 team has always been my favorite, but this year's team is fast approaching replacement of that team. The chemistry, and bond that every player talks about is a rare thing of beauty.