Share All sharing options for: Auburn Swimmers To Represent USA In World Competition 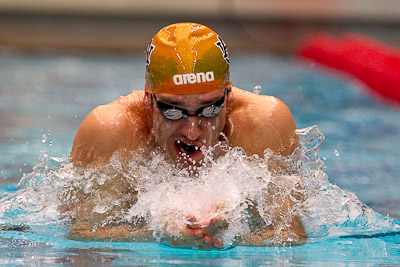 All American Adam Klein is one of five Auburn swimmers named to the USA team.

Anytime one has a chance to represent their country in international competition it's a great honor. It's also a great honor for Auburn University to have both current and former student-athletes selected to international teams. That's what took place this week when five Auburn swimmers were named to the USA Short Course World Championships Team.

The international event is held every two years and this year's contest is scheduled for December 15-19. This will be the first time the competition will be held in the Middle East and it marks the first trip to the UAE for a USA International Swim Team.

The official team roster announced Wednesday includes 20 Olympians as well as the five Auburn stars. The Auburn group is composed of current student-athletes and All Americans Adam Klein and Micah Lawrence. In addition former Auburn greats Mark Gangloff (a Tiger volunteer coach), Tyler McGill, and Eric Shanteau made the team.  Gangloff and McGill still train in Auburn. They will be part of what National Team Head Coach Jim Wood calls, "One of the most talented swimming teams I've ever seen."

The selection process was based heavily on how well the athletes performed at the 2010 Mutual of Omaha Pan Pacific Championships and the Conoco Phillips National Championships both of which were held in Irvine, California last August.

Auburn head coach Brett Hawke said that the selections of Auburn athletes for the USA Team is a great honor for the University and that, "This is proof that swimming at Auburn gives our athletes the opportunity to swim at the international level and I'm really excited for them."

The Auburn family is really excited for you too guys. We know you will do us and your country proud.