Bulldogs Are Fighting for a Bowl Trip.

Share All sharing options for: Bulldogs Are Fighting for a Bowl Trip. 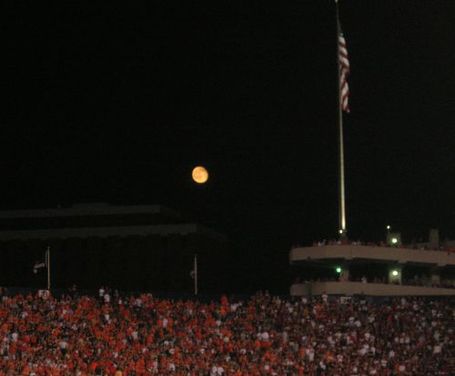 War Eagle, everybody. It's another day in November, so I suppose there will be another debunking of the previous day's Cam Newton rumor, and a fresh new one for today. I'm tired of it. If the ESPN Radio guys ever wanted to figure out how to drive listeners back to their CD and MP3 players, this is it. "Recruiters?" "Two or three guys?" "Cheating Scandal that wasn't?" "Witch Hunt" is an appropriate term. The usual media faves Texas, Oklahoma, Florida and Alabama are out of the BCS title chase, so let's print every message board rumor we hear, and attribute it to vague sources. It's disgusting.

Hopefully the Auburn football team can take their frustrations out on the Georgia Bulldogs Saturday. I'm fully expecting to see a ragged game, as it will be the 11th in a row with no off-weeks for both teams. Last season in Athens, fatigue got to the Tigers as they committed 9 penalties in a sloppy game, and were beaten back at the point of attack as the contest went on. The thing that most concerns me is that many of the principal players from last season on the lines return for both teams. After the first quarter in Athens last year, the Bulldogs dominated the line of scrimmage. The much-maligned Georgia D was able to hold the Auburn offense to just one field goal drive in three quarters, although much of that had to do with Tiger mistakes on the offensive side. The Georgia offense cranked out first downs on the ground and kept the ball away from Auburn. When the Tigers made mistakes, the UGA offense turned those into points.

Defensively, I'm hoping for a better result up front this year. By game 11 last season, Jake Ricks and Mike Blanc were playing nearly every snap at tackle. Ricks is gone this year, and Blanc has some considerable help. We're fielding a solid two-deep at both tackle spots, and this year's Nick Fairley and Zack Clayton are a big upgrade over anything we had on the line last season. Linebacker depth also played a role last season. Eltoro Freeman was hurt early against Georgia, and Auburn really didn't have an SEC-level replacement ready. Josh Bynes and Craig Stevens had played nearly every meaningful snap of the season, and were dog-tired. This year, there has been a rotation at every linebacker position, and Auburn is as healthy has they've been all year going into the game. Starter Darren Bates will be back, and we've got Freeman, Evans and Holland all ready to give quality rests to the starters.

Special teams will be a huge challenge for the Tigers in this one. Georgia has probably the best kicking tandem in the league, with Blair Walsh kicking, and Drew Butler punting. Walsh has hit 17 of 20 field goal attempts, and he's belting high kickoffs deep to the four yard line on average. Butler is averaging 45.2 yards per punt, and Georgia's only giving up 4.4 yards per return. Opponents have only managed to return 11 of Butler's 41 punts. Georgia is comparable to Auburn in kick coverage, giving up 20.1 yards per return. Kick returner Brandon Boykin sports a good 28.6 yard average. Punt returner Brandon Smith is averaging 16.1 yards per return. These return numbers are particularly impressive, because neither returner has a touchdown to skew the average.

As with every opponent Auburn has faced this season, the Tigers should move the ball. Georgia is pretty quick on defense, but I don't think they have any linemen who are going to force a double team block. The glory usually goes to the ball-carrier, but if anything has defined this Tiger offense, it's an ability to get hats on defenders. Auburn's schemes often end up with a pulling guard matched up on a linebacker or safety, and the defender ends up on the ground. It's incumbent on the Tigers to avoid turnovers and penalties. Last season, Georgia stopped the inside running game, and dared Auburn to be patient with the short outside game. Auburn could not sustain scoring drives that way, and lost by a touchdown.

This year's Auburn offense is significantly different from last year's. Obviously, Cameron Newton is an upgrade at quarterback with his arm and powerful running style. While the loss of Ben Tate could have been huge, Auburn has been able to replace him by committee. The Auburn offensive line had some shaky times early in the season, particularly against Mississippi State and Clemson. However, those problems have been fixed. Brandon Moseley has really come along this season, and he's now playing at the same level that Auburn's four other senior starters are. Support blocking has been there too, from Eric Smith, Kodi Burns and Phillip Lutzenkirchen. Don't forget the Auburn wide receivers. Retired defensive wizard Bill Oliver called them "the blockingest receivers I've ever seen!" There's really no weakness up front. Last year, when Auburn ran, you just had to worry about Ben Tate. This year, you've often got two dangerous backs and the quarterback all moving in different directions at the snap. Newton, Dyer and McCalebb are all breaking long runs consistently. In the passing game, last year's key was to stop Darvin Adams. This year, Auburn's got three receivers on the field that can break it: Adams, Terrell Zachary, and Emory Blake. My hope is that this unit keeps doing what they do, and doesn't play distracted ball.

Comparing the two teams' schedules, a few things have become apparent. Obviously, both teams have improved by leaps and bounds over the course of the year. It could be argued that Auburn got two or three lucky wins in the first half of the season (MSU, Clemson, South Carolina) and Georgia was a few breaks away in early losses. As to non-conference games, both played a BCS opponent, then Auburn had three cupcakes, and Georgia two. Is Clemson at Auburn a more difficult matchup than Colorado on the road? I'm going to call that a push. The Buffs weren't as bad early in the season, and that's a long trip. Where things get interesting is looking at opponents that both teams have played. The only common SEC opponent Georgia has won against was Kentucky, whom Georgia beat by 11 in Lexington, compared to Auburn's 3 point win. Georgia lost to South Carolina in Columbia, Arkansas in Athens, and Mississippi State in Starkville, all teams Auburn beat. Aside from those 4 games in common, Auburn has beaten LSU and Ole Miss, while Georgia has beaten Tennessee and Vanderbilt, and lost to Florida. Conventional wisdom says that Auburn should win this game, but this series is notorious for upsets, ESPECIALLY on the loser's home field. I take nothing for granted in this one!

War Eagle! Let's beat the Bulldogs and win the SEC West! We'll have the usual open thread up Saturday morning, and we'll be here celebrating our Tigers!