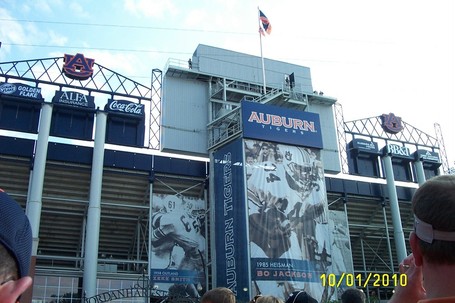 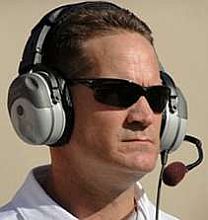 All hands, all hands, this is your Captain speaking. We are prepared for this day, and have the situation completely in control.

I can imagine the frustration Gene Chizik feels these days. His starting quarterback, his employer, and indeed his "Dream Job" is under attack. Like any smart leader Coach Chizik has laid the blueprint for success well ahead of time. Completeing the task may be more difficult than most would imagine, but alas the plan is working to perfection.

Starting with a hungry, and experienced senior class core, Chizik has recruited the best available to assist in managing the battles that lay ahead. What has become one the most sought after offensive coordinators in the nation was brought in to take the anemic attack style of the previous plan, and overhaul the entire concept with perfection.

Added to that list was one of the best moves made for Auburn in recent memory, a wide receivers coach, that taught blocking, catching, angles, and seams like no other. A running back coach that admittedly was already using concepts from the offensive mastermind, and employing them on his previous tenure, he gladly and without hesitation, jumped at the chance to "learn directly from the source" of this powerful, and unique offensive genius.

On the offensive front, a little known, but mighty in stature, presence was brought in to take one of the most experienced group of linemen, and make them worthy of doing battle in the SEC.

On the defensive side of the ball, the call was made to bring a forceful, attack style lead man who took no prisoners, and wanted to control that side of the game at all times. While not quite having the necessary talent avialable the first season, results are starting to show tremendous improvement is being made. Add to that defense the only Outland, and Lombardi Award winner for a single season, to coach the defensive line, you get a tough, hard nosed, approach to defense that starts where championships are won, in the trenches!

Stealing one of the best recruiters along the East Coast from North Carolina, and putting an "old hand" Auburn man with him, has paid dividends on the field, but more so in recruiting. The results of which will be seen in the years to come.

By now you are asking yourself, what does any of that have to do with being under attack? The answer is simple. This group of coaches have bought into the concept of Gene Chizik, Auburn Family, and team. Not just team in the common sense of the word, more of a brotherhood. Stronger ties to your players, their lives, and their tribulations.

While, as Auburn fans, we are used to being under attack from one side of the State of Alabama, we seldom see the venom coming our way as it is today. Not from a rivalry alone, from many sources. It can't be stressed enough how important it is to have strong, and confident leadership when faced with adversity. Auburn has that in Gene Chizik. Has it in spades.

Whatever else lies in our path as Auburn Tigers, we can, with confidence, know that all is being done to protect our beloved Auburn, it's alumni, students, athletes, and fans. What a comfortable feeling that is. Cruise ship comfortable.

Loudly, and with sincere love, I scream War Eagle!