Changing of the Guard in the East

Share All sharing options for: Changing of the Guard in the East 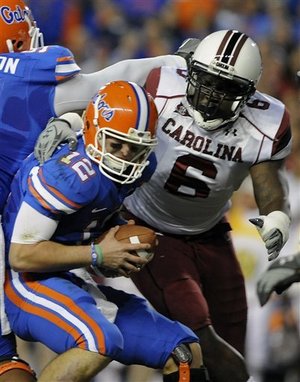 After the win over Georgia last night, I sped home hoping to catch the remnants of the South Carolina- Florida game and was lucky enough to see most of the second half. Truthfully, I though the Gamecocks would falter with the pressure of playing for so much in The Swamp, the lair named by their current coach Steve Spurrier. With the Gators down by two TDs and a 2-point conversion with around five minutes left, South Carolina intercepted a pass and was able to add an insurance TD to win 36-14.

Some might argue that the game was a little closer than that, but by looking at the box score this morning, it really wasn't. Florida ran the opening kickoff back for a score, but their floundering offense continued their ineptitude and QB John Brantley was replaced by two other backups. South Carolina out gained Florida 395-226 and freshman sensation Marcus Lattimore ran through the Gator defense 40 times to the tune of 212 yards. (and put him ahead of Michael Dyer, who only notched a quarter as many carries last night)

So for the first time ever since the conference split into divisional play in 1992, a team not named Florida, Tennessee or Georgia will head to Atlanta and play for the SEC championship. Congratulations, Gamecocks, as the Old Ball Coach has finally elevated you to new heights after six seasons of reworking the culture in Columbia.

The bad news is that to win the SEC championship, you have to replay Auburn, a team that although was still trying to hit it's stride in game four, steamrolled your gassed squad in the 4th quarter in the contest in Jordan-Hare earlier in the season. Yea, you lead for much of the game, but big plays kept you in it. Marcus Lattimore was shut down to the tune of 33 yards and Stephen Garcia got yanked and replaced by Connor Shaw. All while Cam Newton was the real show, rushing for 176 yards and passing for almost as many more.

Since that game, you've lost two more but you did manage to beat the #1 team in the nation, Alabama, for which we commend you. But you've only averaged 30 points a game since the Auburn loss while the Tigers have averaged 49. True, the Georgia Dome is a neutral site, but judging from your turnout at Jordan-Hare compared to Clemson's, you can probably expect the SEC CG to be virtual road game with all the Auburn orange that will be there.

But good luck, Gamecocks. Although we dearly wanted an extra game with our old rival Florida, we will be happy to play you again this season. We have one more piece of business to finish in Tuscaloosa before we do though. Looking forward to it.