Share All sharing options for: Tigers Trample the Bulldogs! 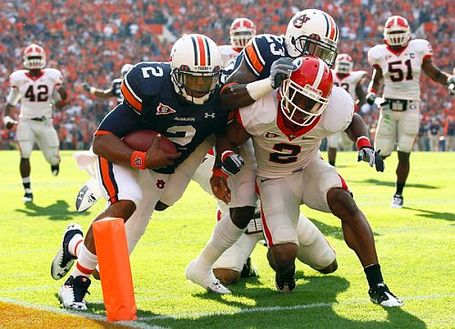 Auburn punches its ticket to Atlanta!

War Eagle, everybody! It's time now for the Acid Reign report on Auburn's 49-31 victory over the Georgia Bulldogs. With the win, Auburn clinched the SEC Western Division title, and kept alive hopes for SEC and BCS titles! Despite enormous pressure from most of the nation's sportswriters and fans, the Auburn administration did what they felt was the right thing to do, and that was to let Cam Newton play. It would have been easy to buckle under the strain, and hold the star quarterback out. However, Newton has not even been accused of wrong-doing at Auburn. Such a decision would have been very unfair to the young man! For Auburn people, it's us against the world right now. One need look no farther than the SBN Georgia blog's post game thread.

Despite the win, all was not well in Auburn yesterday. Tempers flared, and things got very ugly at the end of the game. I think its amusing that the UGA fans are calling us "classless," "thugs," and "cheaters," especially after some of the Bulldog antics the past few years. And which team's bench emptied late? Not Auburn's. However, I did NOT approve of our players engaging in extracurricular melee with the Georgia guys. There were dirty hits both ways, and the refs called a stunning ten personal foul penalties in the game. Five went against Georgia, five went against Auburn, plus a bonus unsportsmanlike conduct flag. Seemed about right, too. We should not stoop to that level. "Lie down with dogs..." Having said that, we also saw one of the dirtiest quarterback hits of the year out of our own Nick Fairley. It was not the play that injured Murray, though. It was the helmet hit in the back that negated a stop by the defense in the 3rd quarter. It was a brutal, dangerous, needless play. Either player could have been paralyzed on the play. I would not be surprised to see the NCAA adopt a "Nick Fairley" rule next year, and start handing out suspensions for big hits on "defenseless" players. I'd also look for the refs to be quick with the laundry in the Iron Bowl.

The much maligned Tiger defense had its difficulties against the Bulldogs, particularly in the first quarter. The Bulldogs attacked the Auburn secondary relentlessly, ripping the Tigers to the tune of 121 first quarter passing yards. Georgia shredded the Tigers for 162 yards in the opening period and put up 21 points. At that point, Auburn switched to a pressure defense with the front seven, and played mostly an aggressive cover two zone behind it. There was little choice, as the Tigers had no chance of covering A. J. Green or Orson Charles otherwise. Under the gun, the UGA offense produced only 21 second quarter yards. The Tigers only allowed 10 points in the final three quarters, thanks to the relentless attack on Georgia backs.

Auburn pulled out one of the better special teams performances of the year on this day. Wes Byrum was amazing. He hit all his extra points, booted some deep kickoffs, and executed a successful onside kick. Punter Ryan Shoemaker returned to his 2007 form, landing a 50 yard howitzer on the 1 yard line. Kick coverage was sensational. League leading kick returner Brandon Boykin was limited to just 15 yards per return.

After some first quarter jitters and butterfingers, the Auburn offense cranked up. While 463 total yards is one of Auburn's lowest efforts of the year, this team was not stopped in the second half. Every possession in the half resulted in a touchdown as the Auburn machine ground down the Bulldog defense. Many Auburn records fell on this day, none more impressive than the single season point total mark. Auburn has scored 471 points in 11 games, eclipsing the 1995 record of 438 points in 12 games. The Tigers are averaging 42.8 points per game, a level never seen before in Auburn history! A tip of the hat goes to true freshman runner Michael Dyer, who broke Bo Jackson's freshman rushing record. What a fantastic scene it was to have the great one on the sideline to congratulate Dyer! The game ball has to go to Cameron Newton. With the weight of the world on his shoulders, this young man became the first player in SEC history to rush for over a thousand yards, and pass for over two thousand. Newton pilots the best Auburn offense in history, bar none!

Defensive Line: B-. I am going to count off a letter grade for personal fouls and ejections. Not only did we keep a UGA scoring drive alive with one, the two ejections will factor into the Bama game as well. Fouls aside, it was a gutty performance up front. Facing a very good offensive line, these guys were relentless, and harassed the Bulldogs into numerous mistakes. There were holes opened up at times, but in the end Auburn only gave up 81 rushing yards. Most of those were on draw plays. I'll count off a little on a few failures to wrap up in the backfield, however, this unit recorded 14 tackles. That's a pretty good day!

Linebackers: B. Much like the line, there were some missed tackles, and our original gameplan of covering tight end Orson Charles with linebackers failed pretty miserably. Georgia had a good plan to minimize Josh Bynes. Craig Steven stepped up in this game, leading the way with nine tackles. Overall tackle numbers are low in this game, due to several factors. The offense kept the ball pretty well, and Auburn didn't give up many time-consuming drives.

Secondary: C-. Considering the competition, the secondary didn't really play that badly. Aside from the first quarter, that is. A. J. Green abuses pretty much everyone he plays. What was very interesting is that Georgia did not throw at Neiko Thorpe at all. This allowed Auburn to adjust, and double cover Green. Orson Charles was a problem all day, but Murray had trouble finding him with pressure in his face.

Punting: B. Ryan Shoemaker's first quarter 50 yarder was a thing of beauty, but the coverage team muffed it for a touchback. The second punt only went 35 yards, but it was high. Neither punt was returnable. Considering that Branden Smith is averaging over 20 yards per return, that's big.

Punt Returns: B. There were only two Georgia punts, a deep one that Quindarius Carr wisely fair caught, and one short one where he had no chance.

Kick Returns: C. It was easily the worst return average of the year, with Demond Washington averaging only 18.6 yards on 6 returns. Georgia is really good at kick coverage, and it showed. If it's any consolation, we covered Georgia's Brandon Boykin even better.

Place-kicking: A+. Wes Byrum drilled all of his extra points, kicked off masterfully, and executed a good (if very close) onside kick.

Offensive Line: A. There were a couple of holding penalties, a personal foul and a false start, but this group dealt with a very confusing scheme and lots of Bulldogs in the box. For the sixth SEC game in a row, Auburn rushed for over 300 yards and gave up only two sacks. This offensive line is fun to watch!

Receivers: B+. There was one very costly dropped pass early that set Georgia up at the Auburn nine for a touchdown after that pass was intercepted. Other than that, this unit delivered with clutch receptions and bone-jarring blocks. We didn't throw much, but after the first quarter the catches were there when we needed them most.

Running Backs: B. This was a solid, unspectacular performance aside from a few errors. There were a few missed blocks in protection. Eric Smith was called for a personal foul from the sideline, and Mario Fannin dropped a sure touchdown pass. The Tigers did grind out tough yards with the game on the line, and Onterio McCalebb showed a nose for the end zone with three scores.

Quarterback: A+. What can you say about a quarterback who hammers for 166 rushing yards when everyone in the stadium KNOWS he's going to carry it? Newton also managed the game well, and was perfect on his throws. The stats show three not completed, but two were dropped, and the other was thrown away when no one was open. Despite all of the pressure in the world, Newton continued to be the best player on the field.

This is the third time Auburn has fallen behind by double digits early in a game, then come back and clobbered the opponent. Make no mistake, this team mangled the Georgia defense. The tigers converted an incredible 10 of 14 times on 3rd down. Bolstered by a raucous home crowd, this team was able to withstand a game effort by a hungry Georgia team. Coach Mark Richt has caught a lot of flak for his decisions recently, but he made a great one at the end of the game taking a knee. The game was over, and he got the thing finished before a brawl broke out. It could be argued that both head coaches are at fault for the situation even getting to that point, but Richt made a good decision there.

With every reason for a let-down this week, the Tigers took care of business and clinched the division with a big win over Georgia. Up next, they'll have well-deserved bit of rest. They'll get a chance to watch some football, recuperate from a hard-hitting game, and cook up some schemes for Bama. Make no mistake, this game coming up on Black Friday is the most important of the year. No trophy or crystal can match the joy of beating the Crimson Tide! War Eagle!