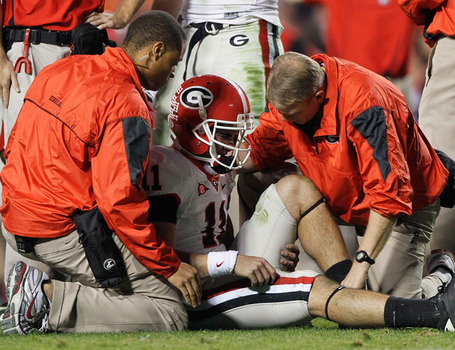 I'm officially sick of Georgia fans feigning outrage over the alleged dirty play of Nick Fairley Saturday night. I've never heard more crying after a game in this series ever. You'd think that a dignified fanbase born in the Junkyard Dog tradition and accustomed to gritty and hard play would surely recognize a man playing on fire and give him credit for garnering not only a significant portion of Georgia's offensive pre-game plan, but being in virtually every jail break pass rush Auburn could mount against QB Aaron Murray. Fairley got double and tripled teamed all night but still mounted more and more pressure as the game went on. Georgia knew they were going to have to run a virtual two minute offense all night long to try and keep up with ours, maximizing the talents of AJ Green, and having Murray constantly running for his life was NOT part of that plan. Georgia got frustrated because other AU defensive linemen were getting through too, so someone decided to try a cheap shot on Fairley to slow him down and chop blocked him.

That play was rightfully flagged but I don't seem to hear many Dawgs prefacing that incident in their sanctimonious demonization of Fairley. Spare me your hypocrisy concerning dirty hits when your guy draws first blood with the cheapest of cheap shots--the kind that ends careers. We at Auburn should know something about chop blocks because we had the reputation 3-4 years ago of being one of the prime offenders--Chaz Ramsey being the primary culprit. I said it then as I say it now: Play like that is dirty and I don't want my school sullied with that rap. Players who purposely engage in such should be booted. Chizik has had no issues with that under his watch. All that occurred under Tuberville and it might be noted for all the Bulldog fans talking out of the side of their mouths that our OL coach at that time was Hugh Nall--yes, a Georgia man. And if former Auburn lineman and now Georgia OL coach Stacy Searels ordered the chop on Fairley, then he's a son of a bitch for doing it too.

So none of you is naive enough to think that some retribution wasn't in order, right? Fairley luckily avoided the chop block. He must have sensed that it was coming, and I'm quite certain that's the reason he played like a man possessed the rest of the night. The hit into Murray's back that came forthwith was a cheap shot, but no more or less cheap than the aforementioned one that necessitated it.  Pure payback. This is high-stakes football, not grab ass, and let he who is without sin cast the first chop block and blog post.

Georgia fans keep harping on the fact that Fairley seemingly body slams every QB he hits, and they were especially keen to the play towards the end that knocked Aaron Murray out of the game--when Fairley collided with his knee. The replay clearly shows Fairley being blocked into the direction of Murray, and there simply was no way to stop his almost 300-lb girth from continuing through. Unfortunate and untimely, yes, but not dirty. At Auburn, we call that playing hard. At Georgia, it's obviously a call for righteous indignation.

After listening to Atlanta sports radio and reading all the sports blogs the last two days with Bulldog fans whining about the Dirty Fairley, I finally hear the truth today from Buck Belue, the former Georgia 1980 national championship winning QB turned radio talk show host. Buck agreed that the spear to the back was dirty, but the rest was just hard-nosed football and that Dog fans better suck it up. And Buck got an arm broken courtesy of Auburn once.

But Georgia fans continue to call Fairley and Auburn thugs. You know what thuggish is to me? Coming out of that long injury timeout, one of Georgia's lineman starts a fight with Fairley on the ensuing play. Okay, maybe that's their idea of retribution after a perceived dirty hit on their QB, but what about half the Georgia team rushing onto the field? What, did they think it was time for another celebratory rush into the end zone like their 2007 Florida game gimmick? That's thuggery in my book--bull rushing the field like a bunch of heathens. You do know we still have that sprinkler system ready for you every time you come to town, right? Nothing stinks like a wet dog, except for said dog's unabashed hypocrisy.

Not one single Auburn player on the bench came rushing out onto the field. We're obviously better coached and disciplined. Georgia demonstrated during the off-season that they have none. They lead the nation in player arrests and other off-the field distractions. Perhaps that's the definition of a thug you're looking for, Georgia fans. It's obvious that Mark Richt has lost control of the discipline with this team, so get your own house in order before you dare criticize ours. Our players were baited into retaliation during that melee, so we'll have two guys that sit the first half against Alabama. I wonder what the outcome might be for your scrubs who rushed the field?

Normally I'm not so critical of or vindictive to a vanquished foe, but Georgia fans have worn out my last bit of magnanimity this year. It's unusual for them because I give them high credit for being the best rival fans we have. I get bored of people telling all their stories of isolated acts of hate by Auburn or Georgia fans--it encourages additional cheap shots told in turn. Get over it, Georgia. This was a game of frustrations--Auburn's over losing the last four games in this series and Georgia's for being so underwhelming this season. Welcome to Suck'ville, Bulldogs. We were there two years ago, so we know how you feel. You don't stay there forever. Unless you decay from within.

Something is amiss with Georgia fans for them to be unloading all their frustrations on the bogey-man Nick Fairley. They're deflecting the real problem. They're in denial. They're desperate. I know it's hard to have more points hung on you ever by your oldest rival in a regulation game. Yea, it's hard to have this much talent on a squad and only have one victory over another team with a winning record (Kentucky), but you're transferring all your frustrations onto Fairley and not to whom you really want to--Mark Richt. This is Richt's second subpar season in a row, if you count 8-5 as subpar--and Georgia fans do. Richt was the golden boy. He averaged 10 wins a year his first nine years on the job. Florida and Tennessee are down this year. This should have been their shot. Sitting with five wins right now is way beyond acceptable, and I think that patience is waning in Athens.

On the way back to Atlanta after the game, I listened to the Georgia post-game call in show on the station out of LaGrange. There were some calls concerning the supposed dirty play, but mostly I heard criticism of Richt. At least two callers suggested he should go ahead and pursue his career in the ministry and leave Georgia football alone. Yes, I know that's a common pejorative comment among Dog detractors, but these guys were Georgia fans and they were serious. Maybe it's hard to see what's right up in your face, but I saw this coming. As evidenced leading up to the start of the season and this Saturday night, it's obvious that Mark Richt has lost control of this team because they suffer from an abject deficiency of discipline. And consequently, he's losing control over the fans. With the fan meltdown over this blow-out loss and the continuing deflection of blame and criticism rampant in the Bulldog nation, I think it won't be long before the long knives are out in Athens, and I don't think they'll be coming for Bobo this time.

The Dawg fans know it, I know it, college football even knows it. The blood is in the water. That's why we heard on Sunday the report that Colorado might be interested in his services--sort of like a lifeline thrown out into the shark-infested waters. I heard Richt on the radio today. I hear it in his voice. He knows the fan support is fading, even though the average fan doesn't even know it yet. It'll take a few more days for them to realize it once they decide to quit blaming Nick Fairley for everything from dirty play to job losses to the stagnant economic recovery. I'll go on the record now: if Georgia loses to Georgia Tech and fails to reach a bowl, it will be the last game Mark Richt coaches for the Bulldogs. That's what it's come to.

Big time football fans are fickle little bitches, and by no way do I not include Auburn in that bunch. Mark Richt will be the latest victim of his own success in the SEC. Two conference titles and 9+ wins a year ain't enough for any of us. A coach could do that forever and we'll still throw him out on his ear for not winning the big one. Go ahead, flush a decade of program building down the drain for just one more card, desperately trying to obtain the winning hand. For every Mark Richt, there's two Ray Goffs. Just know those odds before motioning to the dealer.