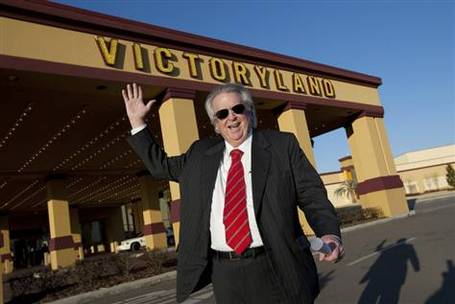 Breaking news in the Cam Newton pay-for-play saga, with reports that the FBI is now looking into an Auburn booster named Milton McGregor, which marks the first time that someone associated with the school has attracted attention, and this man has quite the (recent) past. Initially, the FBI was supposedly investigating the shopping for players angle with Kenny Rogers and the recent controversies he's had with the NFLPA, but now the attention is being turned to someone on Auburn's side who could possibly have paid for Newton's services.

Why would the FBI be concerned with a booster paying a player? Perhaps because McGregor was arrested last month by the FBI in a bribery sting over an attempt to buy off politicians for gambling concessions. McGregor reportedly owns the Victoryland dog track and is a major Auburn booster, giving one million dollars two years ago towards the building of the new arena. Perhaps intel coming from that sting investigation concerning pay for play fell right into the FBI's lap, hence their quick entrance into this case, but that is pure speculation at this point.

While most people highly doubt that Auburn university itself would conspire to pay for the recruitment of Cam Newton, the possibility of a rogue booster has always existed and now that the microscope has fallen on an Auburn supporter, the rumors will be flying.

Again, all we know is that this booster, McGregor, is being questioned by the FBI in the Cam Newton investigation and his involvement at this time is not known.

This report from ESPN details that MSU booster Bill Bell told the NCAA that he recieved a text message from Kenny Rogers outlining a payment plan for Cam to sign and also was on three-way phone conversations with Rogers and Cecil Newton discussing the matter. The payments plan was to pay out $80,000 the day after Cam signed, and $50,000 more in 30 days and the same 30 days after that. Bell also played to the NCAA recorded conversations with Rogers.

Some comments from Bell concerning what he told the NCAA:

"When he asked for it, it was like, 'Bam! He (Rogers) told me this kid's dad is going to want money and the next day he sent me a text message. He didn't say anything other than, 'This is what I want and I want it in three installments.' "

"(Cecil Newton) didn't come out and say, 'I want $180,000,' He inferred it and talked about it, but not directly. Kenny would talk about it in front of him, and [Cecil Newton] never corrected him or said, 'No, that's not what we're doing.' "

Speaking of a direct conversation with Cecil Newton:

Well, Auburn fans, when it rains, it pours. I'm sure more reports will come to light soon identifying if there is corroborating evidence to Bell's statements. If there is, then this certainly would cast greater suspicion upon Cecil Newton than there already is.