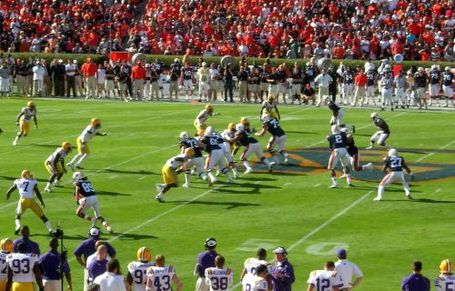 Powerful line play is how a team consistently rushes for 300 yards.

War Eagle, everybody! While Auburn fans take a week off from Tiger football, rest assured that Iron Bowl preparations are already under way for the SEC Western Division Champions. The Tigers hope to keep on doing what they do, which is to bulldoze opposing defenses to rubble, while making enough plays on defense to allow the offense to pull ahead. It's a strategy that has produced eleven wins, against no losses. Auburn has never lost after starting a season 11-0!

It's been very interesting reading what writers have to say about Auburn this season. "Surprise" is one of the words most often bandied about. The surprise isn't that Auburn's playing well as a team. That much was expected, and most pundits did put Auburn in the top half of a very tough SEC Western Division. What's been unexpected is the emergence of two really special players: Cam Newton and Nick Fairley. How does one go from good to great in football? Add a few great players.

Right now, Nick Fairley is getting more ink for allegedly being a "dirty" player than for his accomplishments. Overlooked in the controversy is the fact that Nick Fairley is major force in the middle of the Auburn defense. Fairley leads the SEC in tackles for loss with 15. He's second in sacks with 9. Doing this from the middle of the line is difficult. Most of the time those leaders are ends, or even linebackers.

Much has been made over the violence with which Fairley makes tackles on the quarterback. You have to consider, though, that the quarterback is often one of the strongest, most athletic members of any team. It's especially true in this day and age of mobile quarterbacks and zone-read offenses. How often have we seen the quarterback avoid tacklers in the backfield and make big plays? How often have we seen arm tackles shaken off, or a lineman with a dead-to-rights tackle come up empty? The SEC is full of powerful, elusive quarterbacks. You've got Vandy's Larry Smith, Randall Cobb at Kentucky, Stephen Garcia at South Carolina, Aaron Murray at Georgia, Trey Burton at Florida, Jordan Jefferson at LSU, Chris Relf at Mississippi State, and Jeremiah Masoli at Ole Miss. All of these guys make people miss. They all shake off tackles and make big plays. A lot of defensive players have been embarrassed by SEC quarterbacks this season. You don't get sacks with "pretty please" and love taps in this league!

What Nick Fairley tries to do is get the quarterback off their feet when he gets there. If the guy's feet aren't on the ground, he's not going to be running away! I think it's also important to note that in just about every case of the "Nick Fairley suplex," the QB is trying to spin away after contact. You're not going to be able to arm-tackle many SEC quarterbacks. You've got to wrap up and muscle them off their feet. Nick Fairley actually gets this, like few other defenders. When a 300 pound man gets to an SEC quarterback, a big collision is going to happen. You're not going to get a guy like Ryan Mallett or Jeremiah Masoli down without some serious momentum. Until the NCAA adopts an NFL-like "in the grasp" rule, Fairley's method is going to be one of the most effective ways to deal with big mobile quarterbacks.

Being slammed down and hit hard by a 300 pound tackle does take a toll. Few of the quarterbacks who have played against Auburn have been effective in the 4th quarter. The most notable exception was Jeremiah Masoli, and Ole Miss took pains not to have him sit in the pocket looking downfield very much. Looking at just point totals, offensive production against goes down every quarter against the Auburn defense. The Tigers have given up 89 points in the first quarter, 74 in the second, 66 in the third, and only 45 points in the 4th quarter. Whether the opponent fan bases like it or not, Auburn's strategy of wearing down the opponent's backfield has been effective. There was an interesting analysis of Fairley's play in yesterday's Birmingham News.

Speaking of hitting the quarterback, I'm sure this off week is much appreciated by Cam Newton. If you think the five or six times a game Fairley hits the quarterback is bad, consider this. Cam Newton has carried the ball 206 times this season. That's an average of more than 19 per game. There are also hits on Cam after the throw, or the option pitch. I'm really amazed at how well he's held up! One other bit of interest is that none of Auburn's regular rushers has been held below six yards per carry on the season. Newton averages 6.3, Dyer 6.3, and Fannin 6.7. With mostly carries to the outside, Onterio McCalebb is averaging 8.8, and Terrell Zachary 8.1! This team can tote the rock!

Cam Newton is on the verge of breaking more records single season records in the Iron Bowl. He's currently tied with Bo Jackson with 17 rushing touchdowns. He trails the all time touchdown pass record of 22 set last year by Chris Todd by only one. Newton's 39 total touchdowns responsible for is already far and away the Auburn record. A couple of other Tigers are threatening to crack one thousand yards, with three games remaining. Demond Washington has 918 kick return yards this season, and that's already a single season record. Michael Dyer has 859 rushing yards, which is an Auburn freshman rushing record.

For all practical purposes, Iron Bowl week starts today! We'll watch the Tide scrimmage with Georgia State tonight, although we'll likely learn little from that game. I expect this year's Iron Bowl in Tuscaloosa to be tough. There's no chance that Bama overlooks us this year. After last season, and the BCS bulls-eye the Tigers are wearing, there's little doubt we'll get the Crimson Tide's best effort. War Eagle! Let's get fired up! Beat Bama!