Share All sharing options for: Boise State Finally Gets to Tackle SEC Teams in Kickoff Game 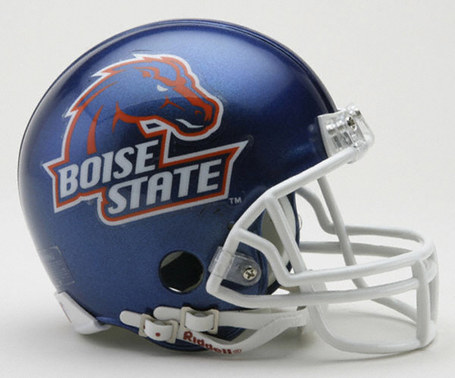 Good God, this helmet pic turned out to be huge--just like Boise fan's heads.

Just anounced this afternoon, the Chick-fil-A Kickoff Game has inked Boise State in two upcoming contests, one next year in 2011 against Georgia, and the other in 2014 against Ole Miss. Boise was originally supposed to be a home game for Ole Miss next year, but the attractiveness of the matchup garnered the attention of game officials who decided to try and move it out a bit to fit the schedule. Ole Miss will now replace Boise with BYU next season, then will wait an additional three years to play the Broncos in the Georgia Dome.

Boise gets it's shot next year with a rematch against Georgia. If you recall, Boise played at Athens in 2005 and took a 48-13 drubbing. Most folks seem to forget that part when talking of all the BCS teams that Boise State has played in the past few years. This game could be an exciting contest if BSU QB Kellen Moore returns for his senior season, matching up against Georgia sophomore QB Aaron Murray, who has thrown for just as many yards as Moore has so far this year, in spite of being harassed and late-hit  by Nick Fairley.

Regardless, this additional exposure will elevate Boise State in many minds and perhaps go a long way in earning respect by playing BCS teams even on a neutral field (which will certainly be in name only as far as the Georgia game is concerned). We in the south call it the Florida State method--playing anyone, any time, anywhere.

Note to the Atlanta Sports Council, the promoters of these games: please don't get too Boise happy. Some Cinderella sympathy is fine but there are other BCS teams--especially in the PAC, Big 12-10 and Big 10,11,12 that we southerners would like to see down here. Maybe also we can put the ACC on hiatus after the Auburn-Clemson matchup in 2012 until they start to be significant again in CFB.