A Day to Give Thanks!

Share All sharing options for: A Day to Give Thanks! 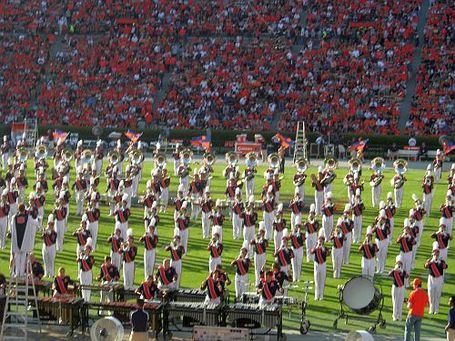 And the band will play "War Eagle!" quite a bit!

War Eagle everybody, and Happy Thanksgiving! As I write this, it's Wednesday afternoon on a gray day, and everyone's home and toasty warm in the living room, digging into the stack of DVDs and Blu-Rays checked out of the library. The smell of buttery-baking Chex Mix is in the air, and this great holiday is finally here! The smoker has been loaded with charcoal and hickory, and that bird has already been brining for two days. As Pat Dye used to say, the hay's in the barn and it's almost time to see what we've got. On this day of gluttony and family gatherings, do try and find some time to reflect on who you're thankful for.

Naturally at this time, I'm most thankful for my family. They are truly a gift. Kharma is not real, because I got way better than I deserved in that department! I'm thankful to be part of a great community here on TrackEmTigers.com, and have to thank Jay again for giving me an opportunity to post here! I'm also thankful for the folks that read us! I still can't quite get my head around the idea that thousands of folks a day read what we write! I especially try to remember the selfless, dedicated folks who work on Thanksgiving Day, to keep us safe, and heal our ills. I'm talking about the police and fire fighters, doctors and nurses, and especially the soldiers under fire half a world away trying to make the world a safer place. I'm deeply grateful to all of those folks!

We've got a whale of a football game on tap for Black Friday. I've heard it opined far and wide that Auburn should win this game, and the best team usually does win. However, I'm not among those optimists. I think it will be a hard-fought war, and the team that makes the fewest mistakes will win. Alabama has quite a few strengths, and I think they can match up well in a lot of areas. When you look at overall schedules for both teams, they beat their SEC opponents by nearly the same ten point margin.

The key matchup in this game is going to be the Auburn defense vs. the Bama offense. The Auburn defensive line has tended to get the better of this matchup most recent years, and Bama's line is less powerful than a year ago. Auburn has the players to bang with Alabama's running game. However, I really don't think Alabama is going to spend as much time this year pounding away on a strategy that won't pay dividends. I think you'll see a lot of quick passes to the sideline, much like other offenses have done to Auburn. Bama's got the players to be successful at that, too. Julio Jones has 65 catches on the season, more than any Auburn player in history. There have been those who have nicknamed Bama QB Greg McElroy "Cap'n Screen Pass." I think it's a compliment. He is good at it, and doesn't have his ego tied up in trying to make dangerous big throws downfield. The Bama passing attack averages a ridiculous 9.2 yards per attempt, and McElroy's hitting 70 percent of this passes with only 5 interceptions on the season. It's incumbent upon the Auburn defense not to allow Alabama to match us touchdown for touchdown. Who's going to cover Julio Jones? I think Neiko Thorpe matches up best physically with him. I believe, though that Auburn's going to have to use cover-two on that side for the most part.

Special teams for both squads have put up pretty similar numbers, except for the punting segments. Alabama has been much more consistent punting, and returning punts. Auburn's had a tendency to punt short, and the return team lets 'em hit and roll for additional yardage. Meanwhile, Bama's Marquis Maze has been chewing up over 15 yards on the average when he fields one. I don't think either team will punt much, and this should not be a big factor unless there's a blocked punt, or someone fumbles one.

Like most Auburn fans, I'm very excited about the Auburn offense in this matchup. We've faced a number of good SEC defenses, and only Mississippi State's really slowed down the Tigers early in the season. It's a pick your poison proposition. WITH Terrence Cody last season, Auburn still won the war in the trenches for most of the game. Four of Auburn's linemen are seniors, and a little better and more experienced this year. Brandon Moseley has been a big upgrade at right tackle. Against a younger Bama front, Auburn should control the line again. Last year, to slow down the Auburn offense, Alabama pretty much had to bring more defenders into the box than Auburn could block. They started blitzing, and Auburn was basically held to one TD bomb in the last three quarters. The difference maker in this year's equation is Cameron Newton. He leads the league in rushing, and can make all of the throws. Unlike last year, you can't go crazy with the blitz against him. You can pick your spots and try to confuse him, but you've got to be careful. When teams have shown press-man coverage and a big blitz, it's been nearly automatic that Cam's going to take the snap and go forward. Miss a tackle at the line, and Cam runs a LONG way. What makes it doubly tough is that the coverage guys have their backs turned chasing the receivers.

What I think Saban and Smart will do is try to play disciplined assignment football. The first guy to the play can't try to blow Cam up. They've got be focused on containing, grabbing on, and waiting for help. Meanwhile, they'll be trying to rake that ball out. There will be some room in the running game, but I think Bama will try to make Cam put together some 10-15 play drives, and hope for mistakes. Turnovers will be critical in this game.

As usual, we'll have an open thread up Friday morning. Feel free to drop by and comment all day long! We'll have the play-by-play, and plenty of Auburn spirit! Have a great Thanksgiving, and enjoy the Iron Bowl tomorrow!