SEC Quarterbacks Take to the Air.

Share All sharing options for: SEC Quarterbacks Take to the Air. 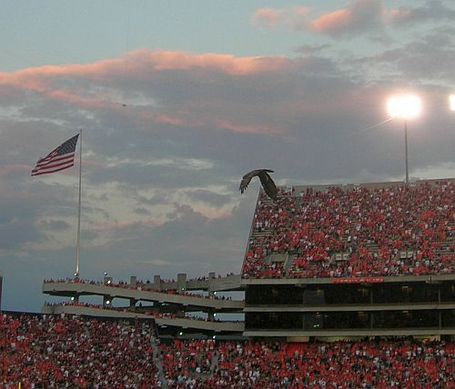 War Eagle, everybody. It's Homecoming week on the Plains. The Tigers have not had a difficult Homecoming game since an overtime win against Louisiana Tech in 2001. This game will hopefully be another convincing victory. You'd have to go back to 1991 for the last time Auburn played a BCS opponent at homecoming. In that one, Auburn hosted Mississippi State. Tony James broke off a 63 yard run late in a tie game, to give the Bulldogs a 24-17 win. That also was the last time Auburn lost a homecoming game. The most important things this week against Chattanooga are to win the game, not get anyone hurt, and to work on problem areas.

With at least two thirds of the regular season finished for all SEC teams, it's time once again to examine one of my favorite stats, net yards per pass. The table below is sorted by record, and we'll check to see if there is any correlation between winning and high score in this stat. The net yards per pass stat includes a 50 yard penalty for each interception thrown.

At this stage of the game, the teams that have three or more SEC wins also tend to have a quarterback around an 8.0 rating. The notable exception to that is LSU, which still probably has the best defense in the conference. Passing efficiency is way up in the SEC, this year. Teams have really emphasized throwing the ball well. Last year's average score at the end of the year was 5.2. The average above is 6.2, an improvement of a full yard per attempt.

A conversation earlier this week with one of my fellow bloggers got me to thinking, how many offensive records will fall this season? Barring the wheels falling off in the last few games, the answer might be "many." Auburn has three regular season games left, a bowl game, and possibly the SEC title game. That's as many as five additional games.

Michael Dyer needs to average only 22 yards per game to break Bo Jackson's freshman rushing record of 829 yards set in 1982. Auburn has had two 1000 yard rushers in the same season only once, in 1979 when James Brooks and Joe Cribbs both accomplished the feat. Cam Newton already has 1122 yards this year. Michael Dyer has 723 right now, and would need to average 56 yards per game to reach 1000.

It's been a remarkable year, but the best is yet to come. This team has really come along and matured on the way. I think we'll see a historic performance going into "Amen Corner," and into the post-season beyond!