Everybody Just Cam Down!

Share All sharing options for: Everybody Just Cam Down! 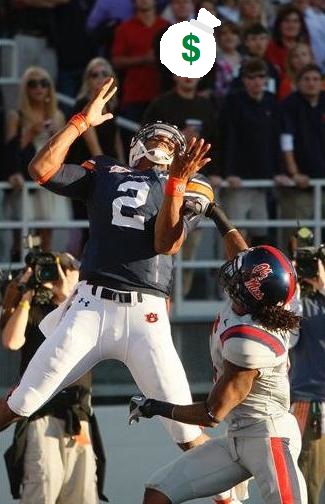 If you're so thin-skinned that this picture bothers you, you better suck it up and give us your A-game next week.

Talk about a firestorm of controversy. Auburn must indeed be relevant again in college football for it to rain down like it has in the last 18 hours. But what do we really know at this point, and how much of what is out there is unadulterated bullshit? Our detractors are many, fair rational minds are few and even we are susceptible to falling off the deep end, so everybody just calm down and relax for a moment. Let's try to wade through it and see what we have so far:

If you believe the time line, the incident was reported in December 2009. Auburn supposedly has known about the allegations since this July. Since the NCAA notifies a school of an impending investigation, it seems unlikely that Auburn would have been an initial target of one. Even Mississippi State is unlikely to be the target of one since they reported it to the SEC. As of now, there is no evidence other than an allegation that a former MSU player tried to procure a payment for landing Cam Newton. Four months into this investigation and that's all they have so far. And please don't think I say that nonchalantly. This sleazy behavior by these so called agents who try essentially pimp amateur athletes is disgusting and has only recently been exposed for the epidemic it is.

Everyone is talking about how they knew all this was going on for months and they're all in the know and they've got connections and they're so much more in the loop than everyone else. Right. Such bravado on the blogosphere. I feel scooped by a bunch of internet trolls. Do you expect me to believe that if some sites/writers had even an inkling of this months ago that someone wouldn't have been using it while Auburn was climbing it's way to the top? Sure. Leave that ammo in the box. This is the internet and we have journalistic standards. Oops, I forgot.

The main points thus far are as follows:

Auburn has known about this incident since before the season started and wouldn't have played Newton if it had a scintilla of doubt that he was anything other than fully eligible. Only idiots or a program seriously lacking institutional control would do otherwise.

Cecil Newton has voluntarily turned over financial records and answered the initial onslaught of questions. The fact that he has hired an attorney to speak for him now is proof of nothing other than he and his family are about to be overwhelmed with attention, which can be harrowing for anyone.

The NY Times reporter than broke the story is named Pete Thamel and he is friends with Urban Meyer. That fact is proof of nothing. There is NO vast conspiracy by Florida or any other school to do Auburn or anyone else in. That attitude died when Phil Fulmer left. (joke) Coaches and school officials have an obligation to report these matters when they learn about them. John Bond did the right thing by revealing this alleged act to the MSU athletic department immediately.

University officials and coaches are not allowed to comment on ongoing NCAA investigations, and their reluctance to speak in detail about the incident is indication of nothing other than observing the protocol. I think Gene Chizik said it best last night that Cam was 100% eligible. Period.

Anything else at this point is pure speculation. Tidbits will flow in, but not all of them will be true. In the end, I believe that it will be found that this Kenny Rogers was not acting in concert with any official from any school nor with anyone in the Newton family and that he's just another scum agent trying to dredge out a dishonest living through fraud or exploitation. Cam Newton did nothing wrong (other than wear that fairy costume for Halloween). Damn, son. We got your back, but how do we defend THAT? How do you go from Superman to Tinkerbell?

The conspiracy theories will flow. Great, stupid analogies will be made, from the downfall of amateur athletics to the belief that the evil capitalists and universities are behind this incident with their virtual slave-trade of athletes. Just hold your nose and probably your tongue. Lashing out at trolls on their own sites just further inflames the situation and gives them success by baiting you into an emotional response. There's nothing wrong with defending the school's honor, but just be objective and use facts, not drivel.

There is no doubt that just the controversy of this incident will cost Cam Newton votes for the Heisman. There's no way that he can be fully vindicated and/or exonerated in the next month and therefore his candidacy will take a hit. Voters, still sore over the Reggie Bush incident (which took four years to unravel) will be gun shy about casting their vote for a player that even hints of scandal. This is where I would think Auburn sports information personnel could end their silence and start to try and salvage Cam's reputation and campaign.

Two things can happen with the team at this point: they can wither from the excess strain of the microscope cast upon them or they can rally around their beseiged leader and become stronger. After talking with the players in a closed-door meeting last night, Gene Chizik had some fiery things to say to them--beyond the pale of his normal message. I think that this team, with the positive support from it's fans, can keep it together and continue it's dash towards an SEC crown and perhaps a national one.