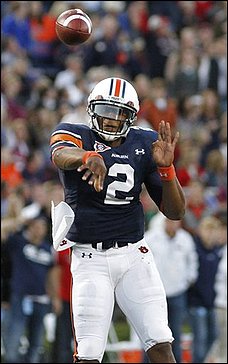 I think Acid Reign was headed down to the game today and he may not have had a chance to put up an open thread before he left, so I'll do it for him. ESPN3 online is carrying the game, but I'll bet dollars to donuts that it's blacked out in Alabama since it's on pay per view as well. Hell, it's probably blacked out up here in Atlanta, but a local sports bar will have it on so I'll go there today for lunch and watch most of it.

How will the Tigers play today given the recent controversy? I think they'll be fine, but if they're not, thankfully it's only Chattanooga, a team that has never beaten us. I'm curious how many carries Cameron Newton will get today or if they'll prefer for him to pass for most of it. More than likely, he will probably be in for only 2-3 quarters before we see most of the starters pulled. I think it's important for him to run the ball some, so he can maintain in the minds of Heisman voters his incredible skill in that respect. After few carries and rushing yards last week against Ole Miss, and given the delicate state of his reputation at present, 100 yards on the ground would sure be nice, provided he's not too banged up.

Easily the best game of the today in the SEC is Alabama at LSU at 2:30 CST. Now many of you might be thinking you want Alabama unblemished before the Iron Bowl so we can beat them with no excuses, but cousin, let me tell you that it's best that they go ahead and lose today to the purple Tigers. Our first goal this season, and every season for that matter, is to win a conference championship, and a LSU win today would virtually assure us of a trip to Atlanta provided we beat Georgia. Although I like our chances going into Tuscaloosa, the pressure of that game between a 11-0 Auburn squad and a 10-1 Alabama team playing basically for a trip to the national championship game might be too much--for both teams. A 9-2 Tide would be reduced to the role of spoiler and without anything to play for, Saban's boys might not give it all they've got. Just sayin...