Share All sharing options for: Tigers Steamroll the Mocs! 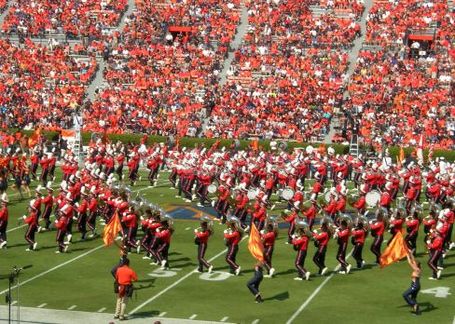 It was a happy Homecoming in Auburn.

War Eagle, everybody! It's time now for the Acid Reign Report on Auburn's 62-24 win over the Chattanooga Moccasins. The Tigers took care of business, streaking out to a 27-0 first quarter lead and never looking back. This team put controversy and media hatchet jobs aside, and did what they do best: play some good football! The stage has been set for Auburn to clinch the SEC Western Division Championship next Saturday at home against a 5-5 Georgia Bulldog team.

One can't help but continue to be impressed with the Auburn offense. The coaches really had to put the handcuffs on, particularly in the running game, to keep it down to 62 points. Only 6 running plays total were called for top backs Michael Dyer and Onterio McCalebb, but those went for 131 yards, or 21.8 yards per carry. Despite the limited carries, Auburn still topped the 300 yard rushing mark for the 5th game in a row, and the 7th time in 10 games. The Tigers did not turn the ball over, and punted only twice on the day. Numerous single-season offensive records are set to come tumbling down in the next two weeks.

The special teams continue to be up and down for the Tigers, and this week was a down period. A brisk wind played havoc with kicks, driving them sideways or holding them up in the air. We continue to punt the ball poorly, but because Auburn punts so seldom, it really doesn't hurt the team. We missed an extra point for the first time since 2008. The worst play of the day was a 98 yard Moccasin kickoff return for the score. We've celebrated aggressive coverage this year, but it cost us on this one. It's become a contest on the coverage team to see who can get to the ball carrier first, and deliver the hardest lick. Speedy receiver Brian Sutherland took advantage early in the second quarter, as most of the coverage team was going for the kill. Sutherland cut back,and no one was home in their lanes. I suppose this was good to get out of the coverage team's system in a game with a 34-point second quarter lead. Darvin Adams made his first appearance as a punt returner, and picked up 11 yards on one return. Auburn actually fielded 4 of 6 punts in this one, which is a dramatic improvement.

Auburn played most of the defensive starters only a quarter and a half, and they did a pretty good job of stopping the Mocs, even though Chattanooga was determined to work on Auburn's weakness, quick outside passes. We saw some aggressive coverage and were rewarded with 5 pass breakups by the corners, and another by safety Zach Etheridge. Auburn played a lot of defenders. There were 25 different players that were in on a tackle during the game. The backups gave up some yards and big plays, but what was encouraging was that they seemed to get better and better as the game wore on. I think some valuable experience was gained!

Defensive Line: B-. Contain was absent at times, but considering the youth on the field, there were a lot of good plays made. Chattanooga got nothing done up the middle, unless it was on counters. On the other hand, only one sack was managed against the Moc quarterbacks, who threw the ball 43 times.

Linebackers: B-. We saw a lot of the younger guys playing with enthusiasm. However, we had guys out of position at times too. Perhaps the most glaring error was allowing the tight end to catch a short post pattern TD before the half, against Auburn's Tampa-two package. That's the perfect coverage to get a pick against that throw, but the middle linebacker has to drop deeper. The bottom line on the front-seven's grades are that we allowed over 300 yards, and over 100 on the ground to an FCS team.

Secondary: B+. The Tigers used a lot of the same coverages they used against Arkansas early, jamming the receivers on the corner, then releasing them to the safeties. The corners would then crash the underneath routes. This disrupted the timing consistently, and resulted in a lot of wild throws. Neiko Thorpe and Demond Washington continue to improve. Chris Davis has really come on well, and you could see freshman Ryan White improving as the game went on. Safety play is picking up, too. I really like how Ikeem Means flies to the ball out there. He's going to help us down the stretch.

Punting: C-. We had a shank with the wind, and a 37-yarder by Ryan Shoemaker against the wind. Watching both our punters and Mike Hammonds of Chattanooga, kicking against that wind was tough. Shoemaker deserves some credit on his punt. That thing might have gone 50 yards on a day with no breeze. Neither punt was returnable, which is a plus.

Kick Returns: A. Washington and McCalebb had the day off, as the Mocs stuck with squibs against them. When they won't kick it to you, you've won the battle! Craig Sanders had a good day running down those bouncers. The Mocs finally did decide it was safe to kick deep after a 4th quarter field goal. Anthony Morgan made 'em pay with a slashing, tackle breaking 52 yard return that set up a quick Auburn touchdown.

Place-kicking: B. There was one missed extra point for Wes Byrum, his first since the Vanderbilt game of 2008. Cody Parkey did a nice job kicking off. When he was going against the wind, he kept 'em low, but still rising into the wind. With the wind, he knocked 'em deep, scoring two touch backs. To manage a 62.9 average on a day like that is pretty good. Parkey also connected on 2 of 2 extra points late. It's good to get him some experience. He's going to be the man, next year!

Offensive Line: B-. This might be a first, giving the line a grade this low on a 600-yard, 60+ point day. There were times that the line dominated, and that's as it should be. This Moc defense gave up almost 500 yards to Elon, an FCS team with a losing record. There was a series or two in the second quarter with the starters in that was just awful. Newton got buried several times in that stretch, with no time to throw. The reserves played pretty well, as I can only recall one big gaffe, when Mario Fannin was buried for a 6 yard loss. Otherwise, there was room for the reserve runners.

Receivers: B. There was lots of explosive play and good downfield blocking, but way too many drops. When the Tigers decide to pass, it's got to be tough to figure out a coverage. We've got three or four guys out there that routinely beat double coverage. Adams, Blake and Zachary are a nightmare trio to defend. The best hope is to get Cam Newton on the ground. Good luck with that...

Running Backs: A-. Despite a ridiculous romp through the Moc D, I am counting off on some protection errors. Can't let a defender come free and earhole the quarterback's blind side if you're the back in protect mode. I loved seeing Mario Fannin get his yards. He's worked hard for 5 years, and deserves some glory. Can you imagine the impact on the Chattanooga defenders? Oh, you've survived our starters. Here's our third-team guy. He's 235, and has 4.4 speed. Good luck!

Quarterback: A. I'll count off a few minor points on taking 3 sacks and maybe a high throw or two. Still, most teams would be hard pressed to hit 16 of 23 in a skeleton drill. When you average 14 yards per pass as a team, you're making some good reads. Those passing numbers become even more impressive if you factor in that there were about four dropped balls. I enjoyed watching Cam Newton join the 300-yard passing club. He's in some elite company in Auburn history.

You really couldn't ask for a better homecoming. We rested many of the banged-up players, got valuable playing time for the reserves, and put up impressive enough numbers for poll purposes. The only injury during the game that looked particularly serious to me was to linebacker Harris Gaston on a cut block. Looked like a knee injury. I felt bad on that one. Gaston's one of those unsung, hard workers on the team that FINALLY got a chance to play a little, and was cut down in the second quarter. The Mocs used a lot of those dives at the back of the legs, to try and slow Auburn's front seven down.

It wouldn't be a complete Auburn post this weekend without mentioning the Newton/agent/payola "scandal." Frankly at this point, the only factual parts of the story that are scandalous are the changing stories of a former MSU quarterback, and the vindictive actions of the national media. One thing the conspirators should have realized is that in this state, if you start a story like that, local reporters are going to dig under every nook and cranny to find the truth. Doug Secrest of the Birmingham News did some detective work on "agent" Kenny Rogers, and published it in this morning's Birmingham News. All worried Auburn fans should read it. Even fine upstanding Bama guys like Bobby Humphrey are defending Rogers. This whole Thursday story looks more and more like a vindictive,vicious hatchet job against the Newton family with each passing day. Shame on those who piled on before the facts were in! I'm waiting for those who started this mess to show a little backbone and 'fess up.

Amen Corner is here, folks. We've got some tough games left in November. Georgia will come in fighting for their post-season life Saturday. The Bulldogs need a win against either Auburn or Georgia Tech to even become bowl-eligible. We'll get their best effort, without a doubt. Alabama is wounded, ticked off, and their pride's been stung. They'll be looking to take us down in T-town. It's time to get ready to rumble! I have every confidence that this great Auburn team will rise to the occasion. What a great year this has been! War Eagle!