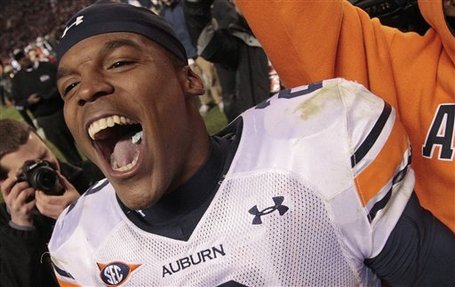 Take that asterick and shove it!

In breaking news from AL.com, the NCAA has ruled that Auburn QB Cam Newton is fully eligible to play in games for the remainder of the season. No previous games played are affected.

"Auburn University football student-athlete Cam Newton is immediately eligible to compete, according to a decision today by the NCAA student-athlete reinstatement staff. The NCAA concluded on Monday that a violation of amateurism rules occurred, therefore Auburn University declared the student-athlete ineligible yesterday for violations of NCAA amateurism rules"
So it appears that the investigation lead to the conclusion that Cecil Newton knowingly shopped Cam's services to MSU, but that Cam was not involved or responsbile for that conduct. Auburn declared him ineligible Tuesday, but his eligibility has been restored without condition effective today."
"We are pleased that the NCAA has agreed with our position that Cam Newton has been and continues to be eligible to play football at Auburn University," said Auburn Athletics Director Jay Jacobs.  "We appreciate the diligence and professionalism of the NCAA and its handling of this matter."
Said Mike Slive, SEC commish:
"The conduct of Cam Newton's father and the involved individual is unacceptable and has no place in the SEC or in intercollegiate athletics. The actions taken by Auburn University and Mississippi State University make it clear this behavior will not be tolerated in the SEC."
Cecil Newton will be severly restricted to access to Auburn now and Kenny Rogers has been disassociated from Mississippi State.
Further statements by the SEC:
"Our members have established rules for a fair and equal recruitment of student-athletes, as well as to promote integrity in the recruiting process. In determining how a violation impacts a student-athlete's eligibility, we must consider the young person's responsibility. Based on the information available to the reinstatement staff at this time, we do not have sufficient evidence that Cam Newton or anyone from Auburn was aware of this activity, which led to his reinstatement. From a student-athlete reinstatement perspective, Auburn University met its obligation under NCAA bylaw 14.11.1. Under this threshold, the student-athlete has not participated while ineligible."
Auburn fans: rejoice! Haters: read em and weep!