Look Who's Going To The Dance

Share All sharing options for: Look Who's Going To The Dance 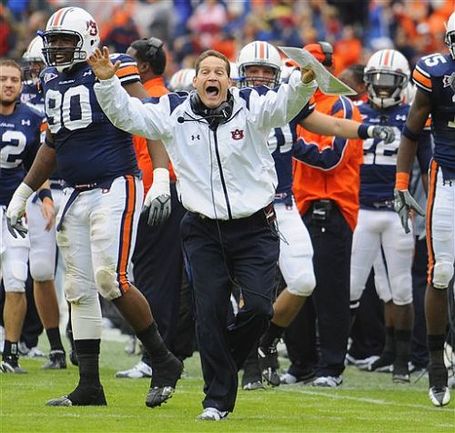 Not that long ago the Auburn family found itself in a state of mind described best as, confusion. A new football coach that had more detractors than our military has bullets, had been named, and we found ourselves at odds as to how it would all play out. We were not alone.

While many questiond the Chizik hire, one lone voice in the national media found something right in Jay Jacobs' decision to bring Gene Chizik back to Auburn. Kirk Herbstriet of ESPN commented that it would be a "good call" by Jacobs, and for the Auburn family to "give it time". Alas, Herbstriet seemed on an empty small island, when compared to the sports "experts".

How can anyone forget the Sports Illustrated piece claiming Chizik to have "zero chance" at succeeding. Here is a portion of that article.

"None of that really matters, however, because Chizik has absolutely no chance of succeeding at Auburn. Zero. It's hard enough to walk into a rebuilding situation at an SEC school -- where the competition is ruthless, where you're going head-to-head with one of the best recruiters in the sport (Saban) and where the fans are notoriously impatient. Any coach who inherited this job was bound to struggle for the first couple of years, which made it all the more important for him to have the support of the community."

The article is worth the read to all Auburn fans if for no other reason, than to gain some realistic appreciation to what Gene Chizik has accomplished here at Auburn.

Of keen interest is how the whole search process was played out in front of the country, and the so called experts opinions that literally dissected the final choice of Gene Chizik as "the right man for the job". Even with Pat Dye writing a public letter of endorsement for both Jacobs efforts, and his selection of Chizik, the national media would embark on a seemingly never ending tirade, of just how out of touch Auburn would become in the national scheme of things.

Fast forward to October of this year, and we see the media hammering on Auburn again. Admittedly for totally different reasons, but with the same vigor, and cutthroat attitude as through the hiring of Coach Chizik. Seems Auburn will never catch a break, or will they? Where will Auburn be ranked after the season if by some chance we don't walk away with the prize on Jan 10th? Where will these "experts" rank Auburn for the upcoming season?

For now none of matters. As we step onto the dance floor, with unsure footing and and anxiety tries to creep into our thoughts, we find ourselves loving the music, enjoying the atmosphere, and generally happy to be where we are. As a program, as a team, and ultimately, as a family. Nationally the awards keep coming in, not just for Chizik, but his players and coaches as well.

Just how much will the horde of jackals underestimate this man we call "Coach"? You can bet they will abandon Chizik, and Auburn, immediately following our next loss. Whenever that may be. They'll be gone with the wind. To that I say, good riddance!