A Tale of Two Champions!

Share All sharing options for: A Tale of Two Champions! 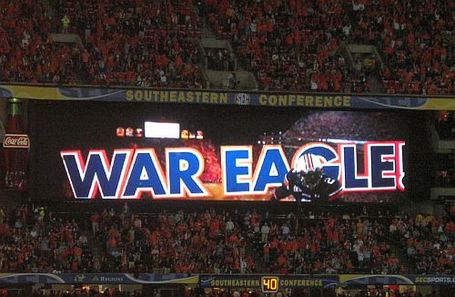 War Eagle, everybody! It's been a heady two weeks since Auburn claimed the SEC football title. This 2010 team may be the most awarded football team in school history, led by Cam Newton. It seems that nearly every day Cam is picking up yet another national award. Yesterday however, it was running back Michael Dyer being named a second team freshman All-American. These are exciting times!

Undefeated seasons are rare, so it's even more impressive to realize that Auburn has put two of them together in the past seven years. With two SEC Champion teams still fresh in our memories, which team is better, the 2004 edition or the 2010? There isn't an easy answer.

In just seven short years, the game has changed, and they styles of the two teams are fairly different. It's hard to believe, but there was no instant replay officiating in college football in 2004. Rules favored defense more, including kickoffs from the 35 yard line, and 5-yard incidental facemask penalties. In SEC games, the 2010 team played from behind in most of its games, and none except the Ole Miss game was decided till the final minutes. The 2004 Auburn team tended to jump on teams for a big lead early, and coast to victory by killing the clock.

Defensively, the 2004 unit has a big edge on the 2010 team, giving up only 11.3 points per game to 2010's 24.5. Both teams played 13 games, and the 2010 team surrendered 362 yards per game, while the 2004 team gave up only 277. The 2010 team claimed 25 opponent turnovers, while the 2004 team came up with 20. Conditions weren't the same for the defenses, though. The zone-read and hurry up spread offenses had not yet invaded the SEC in 2004. Only Arkansas with Matt Jones ran any sort of quarterback option with regularity. There weren't as many basketball foward-sized receivers out there. In 2004, the shotgun was a 3rd and long formation, not an offensive style for every down.

The biggest differences in special teams play between the two seasons are on kickoffs, and punt returns. Teams kicked off from 5 yards closer to the goal line in 2004, and it resulted in about half of all Auburn kickoffs being downed for touchbacks. Auburn recorded 43 touchbacks in 2004, and only 7 in 2010. The removal of the halo-rule on punt returns has crippled the punt return game. For all the fashionable talk about protecting defenseless players, that's one rule that has gone the other way. Generally speaking, the 2010 team was better in both kickoff games, and the 2004 team was better in both punt games. Field goal accuracy was about the same.

Offensively, the 2010 unit is the best in Auburn history by a ton. The 2004 unit was good, but hardly record-setting. Again, circumstances were different. Due to a shut down defense, the 2004 team often held a commanding lead at the half. The 2010 edition had to keep moving the ball and scoring to win many of its games. While the 2010 team was still running the offense at the end, the 2004 team featured a lot of 4th quarters with Brandon Cox or Dustin Godwin handing off to Jerald Watson up the gut every play. By the numbers, the 2004 team rang up 32.1 points per game, and 420 yards. The 2010 team averaged 42.7 points, and 497 yards. The 2004 Tigers committed 21 turnovers, and the 2010 team lost the ball 15 times.

Position by position comparison, after the jump!

Defensive Tackle: Tommy Jackson/Jay Ratliff/Wayne Dickens/Josh Thompson vs. Nick Fairley/Zach Clayton/Mike Blanc/Jeffery Whitaker. The 2004 unit was exceptionally good at sliding over and covering gaps in the running game, but they did not generate nearly the push in the middle that the 2010 unit did. The presence and play of Lombardi Award winner Nick Fairley makes this an easy call. Ratliff has gone on to have a great NFL career as a behemoth 3-4 style nose guard, but he was a rangy converted end in 2004. Advantage: 2010.

Defensive End: Bret Eddins/Doug Langenfeld/Stanley McClover/Quentin Groves/Marquis Gunn vs. Nosa Eguae/Antoine Carter/Michael Goggins/Dee Ford/Corey Lemonier. One thing really missing from the 2010 unit was a powerful run-stopping end, while the 2004 unit started a pair of them on first down. That list of reserves in 2004 is a who's who of great Auburn pass rushers! Advantage: 2004.

Outside Linebackers: Kevin Sears/Antarrious Williams/Derrick Graves/Karibi Dede vs. Darren Bates/Craig Stevens/Eltoro Freeman/Josh Evans. I like the 2010 team's depth a little more, but that 2010 pair of starters were head-hunters. You could not turn the corner on either side against those guys. Sears had 4 tackles for loss and Williams had 9. In 2010, Bates had 1 tackle for loss, and Stevens had 3.5. Advantage: 2004.

Middle Linebacker: Travis Williams/Mayo Sowell vs. Josh Bynes/Jake Holland. Travis Williams did not look big enough to play college football, but he was a ferocious, smart and fearsome presence in the middle. Both Bynes and Williams were great at setting the defense and stuffing the middle, but Williams wins this battle by his ability to stay with tight ends and slot receivers in coverage. Advantage: 2004.

Cornerbacks: Carlos Rogers/Montae Pitts/Kevin Hobbs/Zach Gilbert vs. Demond Washington/Neiko Thorpe/T'Sharvan Bell/Chris Davis. I actually like the 2010 unit's depth better than 2004, but the starters don't compare. Rogers was probably the best corner in Auburn history. Pitts occasionally was beaten, but he was a big physical specimen that could fly up and rattle a receiver on a short dump-off. The biggest difference in play of the two defenses is that you could NOT move the ball down the field on the 2004 unit on short outside passes. You'd get two or three yards, and that was usually it. One drop or missed throw, and you were behind the sticks, and the QB was in a very bad way with a rotation of all-star defensive ends teeing off. Advantage: 2004.

Safeties: Will Herring/Junior Rosegreen/Donnay Young vs. Mike McNeil/Zach Etheridge/Aaron Savage. There was a lot of rust to be shaken off by the 2010 starters, but they've gradually improved over the course of the season. While McNeil and Etheridge can hit, they can't out hit Herring and Rosegreen. In addition, Rosegreen was a converted corner who could cover well man-to-man. Advantage: 2004.

Kick Returners: Carnell Williams/Devin Aromashodu vs. Demond Washington/Onterio McCalebb. The 2004 unit averaged 22.1 yards per return, and the 2010 unit averaged 24.0. The 2010 unit did have a LOT more opportunities, returning a total of 58 kickoffs. The 2004 team returned only 15. Advantage: 2010.

Kickers: John Vaughn/Phillip Yost vs. Wes Byrum/Cody Parkey. Vaughn was 12 of 15 on field goals, Byrum was 15 of 20. That's a slight percentage edge for Vaughn, but he did have to get a second chance to successfully kick the game-winning extra point against LSU. On kickoffs, the 2004 unit averaged 62.4 yards, and the 2010 unit averaged 64.9. Slight Advantage: 2010.

Offensive Tackles: Marcus McNeil/Troy Reddick vs. Lee Ziemba/Brandon Moseley. Each unit was anchored by a great All-American on the left. I'm going to say this, though. You never noticed McNeil. He quietly pinned his guy to the ground on most plays. He didn't give up sacks, and he didn't draw flags. Advantage: 2004.

Guards: Ben Grubbs/Danny Lindsey vs. Byron Issom/Mike Berry. Lindsey was an All-SEC selection, but Grubbs was still finding his way as a converted tight end in 2004. I'll take the experience of Issom and Berry. Advantage: 2010.

Center: Jeremy Ingle vs. Ryan Pugh. Ingle had a tremendous senior season in 2004, but this is a walk-on vs. an All-SEC guy in Ryan Pugh. Advantage: 2010.

Tight End: Cooper Wallace/Cole Bennett vs. Kodi Burns/Phillip Lutzenkirchen. This is a tough comparison because of wildly different roles in this position in the two different offenses. I don't think you could swap these guys to the other team and have success. Wallace and Bennett were like extra tackles on the line. Burns and Lutz were offensive weapons. I'm going to say that the 2010 blocking was as effective as 2004, and better receiving skills are the difference. Advantage: 2010.

Wide Receiver: Courtney Taylor/Devin Aromashodu/Anthony Mix/Ben Obomanu vs. Darvin Adams/Terrell Zachary/Emory Blake/Quindarius Carr. I think there's a definite size advantage to the 2004 unit. Both units blocked well, and made huge timely catches. I think the edge goes to the 2010 unit, for getting loose on more deep balls, but that may be a factor of the offensive scheme also. Advantage: 2010.

Running Backs: Carnell Williams/Ronnie Brown/Jake Slaughter/Carl Stewart vs. Michael Dyer/Onterio McCalebb/Eric Smith/Mario Fannin. There were a lot of weapons among that 2010 group, but I don't think they top those two NFL first round draft pick seniors of 2004. Advantage: 2004.

Quarterback: Jason Campbell vs. Cameron Newton. This is a really interesting comparison in the passing games. Campbell had a slightly higher completion percentage, 69.6 to 67.1 but threw one more interception, 7 to 6. Newton wins the touchdown pass competition easily, 28 to 20. In yards per pass, Campbell averaged 10.0, and Newton averaged 10.5. Rushing stats decide this one. Campbell had 30 rushing yards and 3 touchdowns, while Newton racked up 1409 yards and 20 scores. Advantage: 2010.

Totaling up the scores from the unit comparisons, it's 8 for each team! It's truly hard to pick a favorite, either objectively or based on sentimental reasons. I do think you can argue that Cameron Newton gives the 2010 team an X-factor that no one's figured out how to defend yet. On the other hand, the 2010 team has more glaring weaknesses than the 2004 unit did. One thing's certainly true: The 2010 unit will get to play for the BCS title, an opportunity denied the 2004 unit though no fault of their own.

I certainly loved both of the two teams! It's really hard to pick a winner. I'm going to go with SEC Championship Game performance for the tie-breaker. You had to love how the 2010 team came in and waxed a flawed East Champ by 39 points. Tennessee was similarly flawed, or even more so in 2004, yet that 2004 bunch struggled to put them away by 10 points. I think the winner by a nose is this 2010 team. Barely. War Eagle!