Tigers Should Bring Home a Title!

Share All sharing options for: Tigers Should Bring Home a Title! 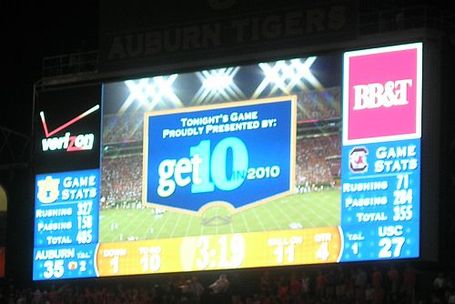 A close game, or not?

War Eagle, everybody! In just two days, the SEC Western Division Champion Auburn Tigers will play for the league title. Despite the incredible season and Auburn's 12-0 record, the Auburn Nation has been on pins and needles regarding rumors regarding the eligibility of star Auburn quarterback Cameron Newton. Yesterday, the NCAA ruled that Cam IS eligible, and that there was no evidence of wrong-doing by either Cam or Auburn. That is a HUGE relief to Tiger fans! We've stood accused, vilified, and burned at the stake in the national media, and the decision by the NCAA is an emphatic "not guilty" verdict! I do NOT want to hear the work "asterisk" again this season, writers!

In addition to the relief for Tiger fans, this news must be a boon to Cam, the Auburn players and coaches. There's little doubt that opposing schools' recruiters have used the uncertainty against Auburn. "You don't want to go there. They are going to be on probation for a long time!" After the SEC Title game, there will be a frenzy of recruiting visits. It's really great to have this onus off. Coach Chizik and his assistants come out of this controversy completely vindicated. It's also a triumph for Cam Newton and the players that a great season was not shot down by rumor-mongering.

There's a game Saturday, and we'll turn to that now. There's been a number of misconceptions about the previous Auburn vs. South Carolina matchup, and we'll clear those up today. Expect a certain level of frenzy from the Carolina contingent, and rightly so. They've never been in this position before. They have every right to be excited. Not only that, but Carolina looks like they'll be loaded again next year. For many Carolina fans, this is just the beginning.

Many folks blame the Carolina loss to Auburn back in September on 4 turnovers at the end of the game, two fumbles by Stephen Garcia, and two interceptions by Connor Shaw. They say that Auburn would have lost, except for the turnovers. Those pundits conveniently forget that Auburn coughed up the ball twice in their own end to set up two Carolina scores. The 20-7 deficit Auburn recovered from was set up by Auburn turnovers. Remove the turnovers by both teams, and Auburn still wins.

Much of the late game turnover bug for the Gamecocks was caused by the Auburn defensive line. Quarterback meltdowns in the final period are nothing unique to this game. Auburn's gotten to quarterbacks all season, and the wear and tear results in poor play late. That's a pattern, not an aberration. Auburn's defensive line looks a good bit different than what we've been used to the past decade. Most years, Auburn's tackles post up in the middle, and pressure comes from the ends. This year's edition collapses the pocket, largely due to the efforts of Nick Fairley. This requires extra attention to contain by the ends. Some say that the Auburn ends have had a down year, but the fact is that they can't beat Fairley to the quarterback. This unit fills gaps well in the running game, too. This year's D-line also has something that's been in shorter and shorter supply since 2004: quality depth. The Tigers rotate about 10 players, and Fairley and the starters are still fresh and strong in the 4th quarter. With tales of Stephen Garcia's arm in a sling, and hurt fingers on this throwing hand, I'd be worried if I were a Gamecock fan!

My guess would be that South Carolina running back Marcus Lattimore will be selected as the freshman offensive player of the year, regardless of what he does in the SEC title game. Lattimore had rough sledding in Auburn, picking up only 33 rushing yards. It can't hurt that the Auburn linebackers are playing their best football of the season coming into this game. I opined in my preseason preview that Auburn's front seven was stronger than Carolina's blockers, and that played out in the first matchup as Carolina managed just 79 rushing yards. Carolina threw the ball to move it, and I suspect that will be the case again in the title game.

The greatest worry in the title game is the matchup of Carolina's wide receivers against the Auburn secondary. One can argue that the Tiger defenders get better as the game goes on, as evidenced by Julio Jones' plunge in production after the first quarter of the Iron Bowl. I think part of that plunge was Saban's insistence on playing Jones on return teams. Auburn has some head-hunting coverage guys like Demetruce McNeil and Craig Sander, as well as Eric Smith. Jones got hammered on returns. Some folks might say that double covering Alshon Jeffery is the answer, but Auburn did that quite a bit in September, and Jeffery still managed 192 receiving yards. In addition, there are threats elsewhere. Tori Gurley, Ace Sanders, D. L. Moore, tight end Patrick DeMarco and running back Marcus Lattimore are all good receivers. If there's an issue in the Gamecock corps, it's that the catches are heavily slanted Jefferey's way. He's got 75 catches on the season, Gurley has 39, and no other Gamecock has more than 23. Auburn rotated corners all day against the Gamecocks, so that no one man had to chase Jefferey all game long.

Special teams play should slightly favor Auburn. Spencer Lanning is a weapon for the Gamecocks, with a similar field goal percentage to Auburn's Wes Byrum. Lanning punts also, and he's near the top of the league with a 43.8 yard average. Carolina covers 'em, too, giving up only 8 yards per return. Auburn's punting game has problems, but it's not something the Tigers do much of. Auburn punted only twice in the first matchup against South Carolina. The Auburn return game nearly cost us the Iron Bowl, and Gene Chizik indicated in a recent press conference that the Tigers are considering making changes for this game. As far as kickoffs go, Auburn's Wes Byrum is doing a good job, and Auburn's coverage is among the best in the league at only 19.8 yards per return. Carolina has only averaged 20.6 yards per return, similar to their coverage numbers. Auburn's Demond Washington and Onterio McCalebb are averaging 25.8 yards per return.

The Auburn offense is the key to victory in the SEC Title game. Despite what folks may think, Auburn's offense never was really stopped in the first matchup with South Carolina. The Gamecocks managed four scoring drives, two off Auburn turnovers. Meanwhile, Auburn generated five, plus two missed field goal attempts. Auburn held a big yardage edge, rolling up 492 yards to Carolina's 384. Auburn overpowered the Gamecock line to rush for 334 yards. That equation has not changed, and the Auburn passing attack has become more developed since week four. Cameron Newton can sew up a Heisman Trophy with a solid performance in Atlanta.

Other intangibles favor the Tigers as well. They've had an extra day to prepare. Carolina faced a rivalry game like Auburn did. Clemson did not play well, especially on offense. On defense, however, Clemson's front four did some damage up front. A week after facing DeQuan Bowers and Co., the Gamecocks now have to face Nick Fairley and a ten-deep line. With quarterback Stephen Garcia ailing, it's not a good situation.

For Auburn, the Tigers must keep an even keel. An SEC Championship Game is uncharted territory for our players as well. We'd also prefer it if the Tigers broke their pattern of digging an early hole and getting behind by several scores. However, the bottom line is that Auburn's better on both lines of scrimmage, and should win this game if they take care of business. War Eagle! See you in Atlanta!