Share All sharing options for: Q&A Session with OregonLive.com 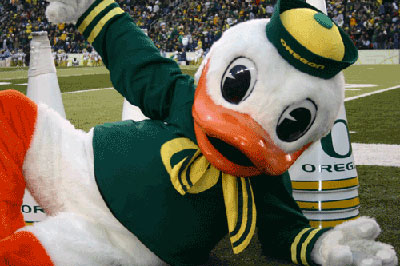 Sean Meagher over at OregonLive.com posed a Q&A session with me last week about the upcoming BCS national championship game. They are basically the equivalent of AL.com and you can click that link to get stories about the Ducks and the game. They haven't run the segment yet, so you guys can get the scoop first. Feel free to insert your own answers to any of the questions you fancy!

Everyone have a merry Christmas and thanks again for your readership!

What do Ducks fans need to know about this Auburn Tigers team? That they never quit. They're not afraid to be down on the scoreboard. They can absorb a mighty blow from the best of teams and recover within the allotted 60 minutes. We love to come from behind, like Zenyatta on the backstretch. Our offense is methodical. It's a numbers game. Run enough plays and the equation will be solved. Our defense is like a Bounty paper towel--absorbent and tough. We wring it out at halftime and keep wiping.


What's the perception of this Oregon team from the Auburn standpoint? Efficient, dynamic, resilient, multi-dimensional, a mirror -image of us offensively,  but still untested by SEC standards. I've watched Oregon play three games this year and seen a boat-load of highlights. Some teams have been able to hang for a half, but the Ducks have played complete games. A few of their scores have been close, but not near as many as Auburn has had. In the end, Oregon has played  two teams ranked in the current BCS top 25. Auburn has played six. That trial by fire is the edge Auburn is banking on.


So far, this matchup has been billed as the big, fast SEC team vs. the little, fast Pac-10 team. How do you see it? I've never really bought into the whole SEC speed myth. We as a conference and as a team are no bigger nor faster than anyone else overall, in my opinion. I think that the SEC has their perceived advantage against the rest of the nation because we play out of fear. Losing a conference game may be no big thing to most teams, but we southerners take it personally. Each rivalry in our conference is like it's own little mini Civil War--the real one. How's that for off-on-a-tangent blog analogies? Seriously, I think both teams are well-coached and execute their game plans well.

Cam Newton is the closest thing to an unstoppable force as we've seen recently in college football. Most people see the highlights and his gaudy rushing numbers, but talk about his efficiency and effectiveness as a passer. I'll be honest, I'm still amazed every time he takes the field. I've never seen anyone like him at Auburn and I was there on campus when Bo Jackson played. He's not just a rushing QB. He has natural throwing ability. He's capable of hanging in the pocket or scrambling outside. He knows how to make a play in short yardage or chuck it deep. Cringe when he pump fakes. I love it when he throws across the field, but we save that for special occasions.


Outside of Cam Newton, who are some of the offensive standouts? RB Michael Dyer, a true freshman, is very LaMichael James like in his game. Small yet tough, he's our Mr. Inside to sophomore Onterio McCalebb's Mr. Outside. We love to run the ball, getting the receivers and H-backs involved, too. Had we not decided to shore up the passing game the last two outings, we might have edged Oregon as the leading rushing team in the nation. Our offensive line is among the most experienced in the country. We have great receivers, with Jr. Darvin Adams being the preeminent one, with Jr. Terrell Zachary and So. Emory Blake not far behind. And trust me, being from a school primarily versed in rushing, we appreciate great talent in receiving when we have it.


Outside of Nick Fairly, who are some of the defensive standouts? The whole defensive line is among the best in the country. Antoine Carter helps anchor that line. We're deep in that position, too, with Michael Goggans and Mike Blanc coming off the bench in relief. Linebackers Craig Stevens and Josh Bynes are a competent corps. Our secondary? Let' s just say that they are great at making adjustments. We are absolutely tough on the run, among the best in the country. We will make you try and beat us with the pass first and see how that goes.


Where do you see Oregon having an advantage in the game? In aggressiveness. I think you guys will come out, go on and stay on the attack. Don't you go for two after some touchdowns just for kicks (pun intended)? I think Chip Kelly will come out with another kind of chip and immediately go for the jugular. LaMichael James scares me, but we are great at stopping the run. We've only surrendered one 100-yard rushing effort on the season. Then again, even if we do slow him down, we have Darron Thomas to deal with. I hope DC Ted Roof has a few different plans for the Ducks. He's going to need them.


Where do you see Auburn having an advantage in this game? We can absorb any blow you guys can muster early. We're going to trade scores right with ya. We're going to stick around. Also, the spectre of the big, bad SEC boogey-man, winners of the last five of seven BCS crowns, could be looming. Will it be like meeting up with a Big-Foot? You guys are in Sasquatch country.


Other than Cam Newton's superhero abilities, what are the strengths of this team? Weaknesses? These guys have 100% bought into the system and trust that the coaches will deliver them if only they perform according to plan. They say that defenses win championships. Auburn is on the verge of putting that notion to the test. I say that the best defense is a better offense. But no one said what to do with two better offenses.


Both teams are known as up-tempo, and second-half teams, do you see this being a factor or negated in any way? I have the feeling that this game will be one half wide-freaking-open for both teams and one half throttled-down. I'm just not sure which will come first, or if they even stagger it into quarters.

Lastly, how do you think this game plays out? Prediction? I don't see Auburn losing this game. I don't see Cam being denied. I think Auburn wins by a touchdown in a high scoring match, but I'm taking the under at 74 points--not really sure it'll be the track meet that most predict. I do know we will see an instant classic and not a blowout like a lot of these BCS championship games have been the past few years (cough, cough, Ohio State, Texas). Good luck, Ducks!

Anything I left out you think is pertinent to the BCS National Title game? Hey, what are you guys giving for tickets out there?