Share All sharing options for: Get Fired Up, Auburn! Last Minute Smack Talk 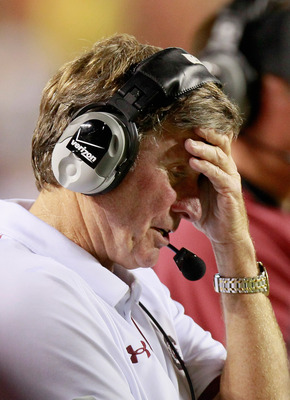 Auburn stands poised to win it's 7th SEC title tomorrow, pulling it ahead of Ole Miss for 6th place in the conference. It's our fourth appearance in the SEC title game and would be our 2nd conference crown under the divisional play format. Not only is the conference title on the line, but a slot in the national championship game as well. Jay, Acid Reign and myself will all be there in the GA Dome. I think Acid will put up his open thread in the morning before he comes over, so you guys keep it going if you're watching from home.

Judging from back to back weeks of having Palmetto state teams come to Jordan-Hare earlier this season, it was not even close the number of fans Clemson brought compared to South Carolina. There must have been twice the number of Tiger Paws that made the trip to the Plains compared to the poultry, so I question how many will make the trip to Atlanta. Since they're finally popping their cherry for the chance to win the conference, they may show up like they've never done before, but they can probably expect the Georgia Dome to have considerably more orange in it than garnet--sort of like the pre-Spurrier days in Columbia during the Clemson game.

While no Auburn fan (nor Gamecock fan, really) expects this game to be that close, some of the things I'd like to see tomorrow in addition to the big Tiger win:

Marcus Lattimore get stuffed again for a thirty-yard day. A total non-factor in the earlier contest this year, Lattimore will no doubt win the award for best freshman in the conference, but it will only be because he's a larger percentage of the Gamecock offense than Michael Dyer has been for Auburn. These two could have been teammates, but Lattimore likely chose SC because Dyer had committed already. Lattimore leads Dyer in yards, 1114 to 886, but trails drastically in ypc, 4.8 to 6.1. I think Dyer easily tops him tomorrow in yards straight up.

Steve Spurrier sing his swan song. It's been a decade since Spurrier last won a SEC title in 2000--with Florida, against Auburn, coincidently. But no omen there. I think this is the OBC's last gasp. Here in his 6th season at Columbia, I think if he doesn't win the title tomorrow, he hangs it up for good after the bowl game, living out his days in peace at Augusta National. If it does turn out that this is the last time Auburn gets to play against Spurrier, I hope he throws a headset or two, gives an awkward halftime chat to the female sideline reporter, and hands Auburn a signed coloring book by which to remember him.

Stephen Garcia gets yanked again. I should have mentioned it above as one of the things I like watching Spurrier do, because he is so famous for yanking QBs, but I'd love to see Garcia get the hook again. Not because he's a bad guy or a bad player, but just for tradition this year and the fact that it's good theater. Okay, he's got long hair. I don't like long-haired quarterbacks. Reminds me of that Steve Tanneyhill that played for the Gamecocks back in the mid 90s. Maybe that guy went on to become one of them pony-tailed lawyers.

Alshon Jeffery have a big day. Yea, you read that right. I like this kid, and face it: does anyone rationally expect for him not to have a big day? He'll get his catches and yards butI certainly hope that Ted Roof will make a conscious effort to squash him. Everyone knows Auburn can't handle big receivers--kinda like a few years ago we couldn't match up with greased-midget running backs--but it doesn't matter here. You've still got to stop us from scoring.

Seriously, it should be a good game, but most everyone not named Lou Holtz thinks that Auburn should win. Sure hope I don't have to eat crow chicken here on Monday though. War Eagle!