A Look Back At A Great Year

Share All sharing options for: A Look Back At A Great Year 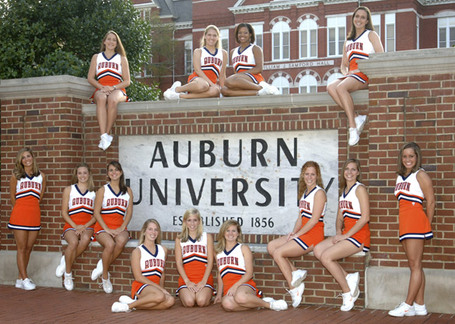 For those of you who are looking for some sort of football news in this article, you might as well turn away now. Auburn athletics consists of more than just football, and today that is what we are going to discuss. More than just football. I will however have an up to date look at the game next Friday, and then we will know the  "who, what, and when" about this game, except the final outcome. Enjoy the weekend.

Women's Volleyball - In 2008 the Tigers had an RPI ranking of 232, and at the end of this season they finished ranked 44. The 2010 squad finished with it's first ever win over a ranked opponent, and another first ever accomplishment, a trip to the NCAA tournament where they won their first match 3-0. It took second ranked Nebraska five sets to eliminate our Tigers from the tourney. Building a solid foundation, this squad looks for bigger and better things in 2011.

Equestrian - Auburn's Equestrian teams have been very successful in recent years and the 2009-2010 season was no exception. With the season begining in September and ending sometime in April, it takes a special athlete to stay focused, and on top of their game to achieve the results that these ladies have. Falling to Georgia 5-2 in the Hunter Seat National Championship has motivated these young Tigers to finish stronger this season. Currently ranked #2 in the land, look for another strong push toward a National Championship.

Women's Golf - Last season the Tigers finished 11th in the country, and placed a member on the first team All-American squad, as voted by the National Golf Coaches Association. Cydney Clanton finished in the top ten of all qualifiers in 10 out of the eleven tournaments she played in. A remarkably consistent performer, "Cydney put together one of the better campaigns in Auburn women's golf history"- Head Coach Kim Evans. Currently ranked 16th in the nation, these ladies are working hard to bring home some hardware this season.

Women's Softball - Improvement was the goal of the team in 2010, and game by game that's excatly what happened. The Tigers reach the NCAA regional play for the third consecutive season by increasing 9 offensive statistics, and 8 pitching catagories improved as well. Offensively the 44 homeruns were the 4th best ever for a Tiger team. Combine that with a 2.23 ERA, also the fourth best ever for Auburn, and you have a basis for improvement. I look for continued increases in production, and pitching from these ladies as they strive for excellence.

Men's Baseball - Winning the Western Division for thr first time since 1995, and finishing with 20 SEC wins and an 11-4 mark against the Eastern Division teams took Auburn to an NCAA divisional play berth for the first time since 2005. Good times are ahead for these Tigers, as they finished ranked 20th in the nation last season.

Men's Golf - What an incredible season the Men's team had in 2010. A very young squad without any Seniors battled it's way into the NCAA regionals. While not advancing, they set the bar for this season to be better. Being in contention in every tournament is the key, and these Tigers steadily improved to where the second half of the season, they felt like they had those chances. Setting up an even better run this season.

Swimming & Diving - There is a rich tradition at Auburn in this sport. Recent success has been in large part due to the Seniors on the 09-10 squad. Here is  part of their story copied from the official Auburn Athletic site...

Auburn will pay tribute to its 13 seniors prior to the meet, beginning at 10:40 a.m. These senior athletes have been a part of three NCAA and six SEC Championship teams and have tallied a total of 81 All-America honors. The class has proven to also be successful in the classroom, as 12 have been named to the SEC Academic Honor Roll and eight named College Swimming Coaches Association of America (CSCAA) Academic All-Americans.

Yes Virginia, there are other sports played at Auburn. I promise to bring a more indepth view of each of them starting sometime in the spring of 2011. A new golfing facility is under construction, along with major improvements being made all around campus for the betterment of our young athletes. The future looks bright for all of Auburn sports. So, let's get out there and show some support for our Tigers.

For now, let's take a moment and reflect back on what a great year it was to ba an Auburn Tiger. May the best of times still be ahead of us, and may we never forget to thank each of these student athletes for their sacrifices, hard work, and willingness to excell, on and off the field of play.