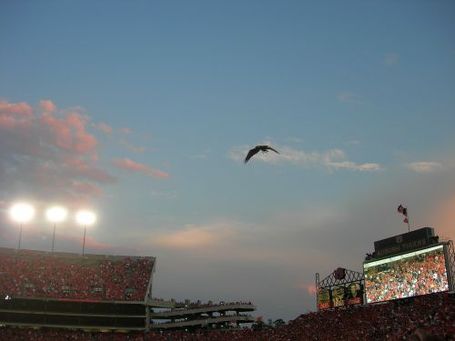 Nova flew at sunset the last time these two teams played!
SEC Championship Game, Open Thread.
War Eagle, everybody! It's time for the Tigers to win a title! A miraculous season by Auburn has led us all to Atlanta, to watch the SEC's biggest and baddest battle for the 2010 league crown. Auburn comes in as a five point favorite, but we can expect the South Carolina Gamecocks to put up a great effort. It's time for the 12-0 Tigers to just keep doing what they've been doing, and that is to WIN!
This game will be played in perfect weather conditions, inside the Georgia Dome. While there should be no climate issues  during the game, visitors to Atlanta should expect cool temperatures after the game. A temperate partly cloudy day is expected, with the high in the 60s. After dark, though, expect the temps to plunge. Sunday, the mercury is unlikely to climb up to more than 40 degrees all day.
I had planned to gear up for this game with fresh coffee, my easy chair and wireless keyboard for my usual play-by-play histrionics. However, thanks to War Eagle Atlanta, I'm going to be in the stands, powered by whatever caffeine-laced energy drink I can get my hands on! Feel free to kick back on this thread all day. Vent, cheer, analyze and above all, just have a great time! Auburn's in the Championship Game, folks! Enjoy it! We Tiger fans don't get this thrill too often! War Eagle, and beat those Gamecocks!
--