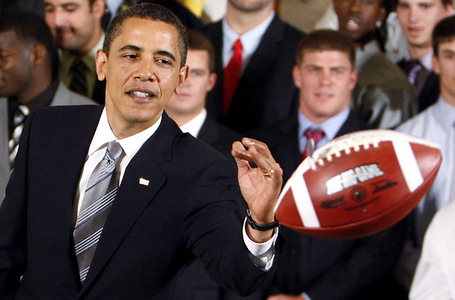 Yeah, yeah, I know. We had our obligatory post-season playoff discussion just last week. But no sooner are the last comments made on that thread than the US Justice Department finally answers Senator Orin Hatch's request to consider anti-trust legalities with the current state of the BCS.  What Hatch got was a definite-maybe that the DOJ will consider the matter carefully and that the Obama administration may possibly look into whether or not consumer protection laws are being violated by the current BSC fiasco arrangement.

Quick history lesson here: The Sherman Anti-Trust act is the legislation most often quoted that governs over monopolies and such, and the one you will be hearing ad nauseum. Not to be confused with the Sherman anti-tank round, although the end results may be similar. Even you non-attorney types should know a little bit about it. It's been used to break up the likes of Standard Oil and many a early 20th century railroad, not to mention Ma Bell in the early 1980s. Another quick history lesson: On the campaign trail, Barack Obama threatened to "throw his weight around" concerning moving CFB towards a playoff if he was elected president, but that may now be hollow sentiment, especially coming off  light weights being thrown around in gubernatorial races in Virginia and New Jersey and a certain senatorial race in Massachusetts. And lastly, Hatch had filed the inquiry after the 2008 season when undefeated Utah was left out of BCS contention and his constituents were left with a bad taste in their mouths for the second time in four years.

For the record, I'm for an eventual playoff and I think most fans are, too, but it's highly doubtful that anyone wants to be made to do it at the point of the gun. Naturally, when you're dealing with over 120 public and private institutions and a large faction of athletic conferences, not to mention 140 years of precedence, change can come real slow. Like national debt payoff kinda slow. But also for the record, I think there is a strong possbility of the government having a case, were they to decide to pursue it. Alas, I can understand the defenses that the BCS and the Old Guard are going to present, too. I'm both sides of the coin.

The main sticking point of a possible DOJ case might be the uneven way that the BCS money is distributed. BCS conferences get more than the mid-majors--which seems unfair on it's surface. But the big boys are the ones who bring in the cash. And it's that 100+ years of name recognition that facilitates that end. Who had heard of Boise State outside of 7 years ago? Look at CFB like a business. It can take decades to build up your brand to become a household name. The final arbiter is the TV ratings and the millions it brings in. People vote with their viewership. And who's going to win out, prime-time programming or Leave it to Beaver reruns on Univisión?

So the ultimate downfall of the BCS may be their attempt to spread that wealth around, seemingly in line with the notions of the current administration--but  maybe it didn't go quite far enough. Originally seeking to only match up the #s 1 and 2 teams in a de facto one-game playoff, the BCS drew the line in the sand and divided the haves and the have-nots--a bold notion in itself,  but made the mistake of trying to share with the have-nots both some glory and some money. Is no good deed to go unpunished?

Granted, the money that the BCS brings in would pale in comparison to what a playoff would generate, and maybe there might be some inequity to it, but it's better than the old bowl system, which was really stacked on the side of the heavyweights. Alas, those days are gone forever. There's no way that CFB would go back to the old bowl system if the BCS, under pressure from the government, simply disbanded rather than morph into some sort of playoff. That would just be patently absurd. But what is fair, both with participation and revenues?

Forget about any populist sentiment you may have for just a second. The teams are still matched up by POLL rankings. It's still a beauty contest. Theoretically, any team has a chance to win it all, but they're still going to have to be elected to the homecoming court. Cinderella nobodies have won MNCs in the not so distant past. Miami in 1983 and BYU in 1984 come to mind. But typically, consistent national rankings over decades for established programs are what give them the consideration over the johnny-come-latelys in the polls. Maybe Boise State and Utah are establishing themselves right now. I wouldn't deny that, but I don't want government fiat replacing good old-fashioned hard work and boot-strapping

We can all remember when Miami and FSU were nobodies, and can see how far they've come--but over decades, not instantly. They earned it. I've said for years that the stars of mid-major conferences have to do more than moan and whine about their status. It's hard to respect your Mountain West or WAC schedule when stacked up against a SEC or Big 10 one. That's why you have to load your OOC slate with BCS teams. Boise played Oregon last year, and plays  Virginia Tech and Oregon State this fall. That's the way to do it. Play anyone, anytime, any where. If I was Jay Jacobs, I'd call the AD at BSU. Tell them we'll agree to a two'fer with them: two games at Auburn and one on the Smurf Turf--provided it's an September game.

My gut feeling? This is all just a warning, with nothing to come of it--for now. Polling data would suggest that such a move would widely be seen by average citizens to just be government meddling, and that the weight of the blame would fall on the president, something he doesn't need at the moment with his own popularity fading faster than a 14 point 1st quarter Auburn lead. Let it keep evolving. It's getting there. I think a big push from outside might be disasterous. It gives us a little bit more to talk about though--until Wednesday.