Big Ten To Dig Deep in the Heart of Texas?

Share All sharing options for: Big Ten To Dig Deep in the Heart of Texas? 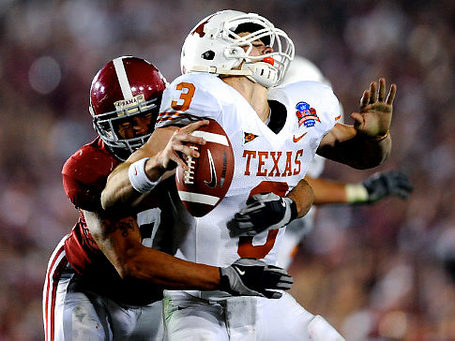 Sorry. Even WITH Colt, the Horns would have still lost. Probably. Maybe.

With all the recent talk of conference changes, we had almost forgotten the original impetus for it, the Big Ten. As rumors of the Pac 10 poaching Colorado from the Big 12 have fallen this week, it seems that Missouri might not be the only target of a possible Big Ten expansion. Seems that "preliminary exchanges" between the Big Ten and the University of Texas have already taken place, according to a confidential source to LJWorld.com. If true, as strange as it may sound, it's not the only time Texas has considered such an interesting conference arrangement. Before the Big 12 was welded together from the old Big 8 and Southwest conferences, Texas considering joining the Pac-10.

If Texas did join the Big Ten, the drawing power for the conference for TV ratings would be astronomical, possibly eclipsing even that of the SEC. However, one look at a map will indicate that the logistics might be hard to reconcile. The travel costs of all sports would be enormous, and one would have to wonder if the extra money would be worth it. But Texas, already the most valuable CFB program in the nation, could possibly absorb it, especially if certain financial concessions were made by their suitor. Texas already receives more TV money than any other team in the Big 12, and would certainly demand a Texas-size share of any new agreement. There are also reports that Texas may also consider forming it's own state-wide TV network, although no details on how that would work are known.

I'm thinking that this is all a ruse, if it's even true at all. The Big Ten is posturing for a specific reason. Perhaps it's to sufficiently motivate Notre Dame to finally consider losing their virginity independence. Or could it be to significantly drop the price and demands of other potential draftees like Pitt and Missouri? And think about the state of Texas itself. They used to be their own separate country for God's sake. Do you think they would stand for the loss of tradition and see their cherished Horns run off to join a durned Yankee conference? They might as well build another Alamo in Ann Arbor for that matter. Besides, there's no way that UT could drop the rivalries with Oklahoma and A&M. And you can't play two OOC games like that every year and a Big Tweleven schedule and expect to compete for many national championships.