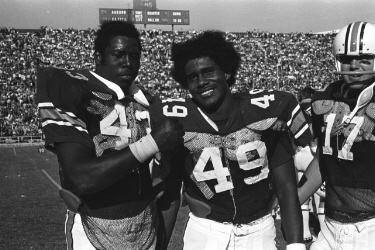 Editor's Note: Good morning. You may or may not have noticed my absence from Track'em Tigers this past Monday. For the better part of a week now, I've been battling a kidney stone and finally had surgery Wednesday to remove it. My plan was to be able to post something new today.  But as my wife has pointed out many times over the years, I'm not nearly as tough as she is - something I accept without argument today. Instead, I'm running one of my favorite interviews from a little over a year ago with former Auburn great, Thom Gossom. His story remains one of the great ones in Auburn history. If you missed it, be sure to take a minute and read all about this Auburn legend. As for me, I promise to back in the starting line up on Monday.  Have a great weekend!

During the fall of 1970, the college football world was buzzing about an early season showdown between Southern Cal and Alabama. USC was preparing to visit Birmingham with the first integrated football team to ever play a game in the state. The Crimson Tide was led by Paul "Bear" Bryant.

On that hot night, seven years after Governor George Wallace stood in the school house door in Tuscaloosa to prevent blacks from enrolling at the university, Trojans running back Sam Cunningham, an African-American, slashed through the Tide defense, rushing for 135 yards in leading USC to a 42-21 win over Alabama and forever changing the racial make up of football teams in the SEC.

Meanwhile, a few hours south in Auburn, another black player was quietly making history. Birmingham native Thomas Gossom arrived on the Plains that summer with nothing more than a suitcase and a dream. There was no scholarship offer or friends waiting for him at the rundown bus station in Auburn when he arrived. Setting out on foot toward campus, he began a journey that would change the face of Tiger football.

Gossom's story is the subject of his new book, Walk-On: My Reluctant Journey to Integration at Auburn University. The book is available through Borders and Waldenbook stores across the country. It can also be ordered through Thom's web site, Walk On Gossom.com. If you choose to order through his web site, he will personally autograph your copy.

I recently sat down with Gossom, the first black athlete to graduate from Auburn, to talk about his riveting book that looks at life in the South during integration and how Auburn and its players grappled with the changes. It's a story of a young man who battled loneliness and racism, but ultimately found a home and a place on one of Auburn's most storied teams, The 1972 Amazins.

Listening to Auburn football radio broadcasts as a kid in Birmingham, Gossom made up his mind early that he was going to play at Auburn. "I decided Auburn was going to be an adventure," said Gossom.

"When I got there, none of the coaches knew me. I went to pre-college counseling and asked where the athletic complex was and then went and found the freshman coach, Coach Jones and told him I wanted to try out. He said OK, but to this day I still don't know if he actually thought I'd show up," laughed Gossom.

While believing strongly in his abilities, Gossom still wondered whether he had the skills to stick as a wide receiver. Those worries quickly vanished. "After a week I realized I had good speed," he said. "I was faster than all the walk-ons and most of the freshman team.

"I could see the coaches starting to notice me. I found out later from Pat (Sullivan) that the coaches were asking him about me," he said. Gossom and Sullivan attended John Carroll Catholic together, but were a few years apart and not close friends in high school.

Sullivan did what he could to help out his fellow classmate.

"Even though were weren't close at that time, Pat still did what he could to help me," said Gossom. "He helped by throwing the ball to me. I got a lot of Terry's (Beasley) and Dick's (Schmalz) playing time in spring practice because that was a time for the young guys and Pat did what he could to get me the ball. That inspired me to keep going."

Gossom's hard work paid off in 1971 when Auburn coaches rewarded him with a scholarship. After spending the '70 season on the freshman team, he would redshirt his first scholarship season, setting the stage for a memorable three year run at wide receiver.

Life on the Plains

While Gossom was excelling on the field, life was much tougher off it. In a state that was struggling to understand and accept integration, life on campus was hard for the few black students who attended Auburn.

"There wasn't much socializing when I got there," he explains. "There were only about 30 black students out of 13,000 total on campus. This wasn't my first integration experience. I had a great experience at John Carroll and had white friends who I hung out with regularly.

"A lot of kids at Auburn hadn't had that experience," Gossom continues. "It was different for them. That made it tough for me in a lot of ways, but not in the way you read about a lot of civil rights stuff where people were threatened with physical violence. It was more psychological.

"I felt very much isolated and alone," said Gossom. "There were nights after a game where my parents would stop by to visit and then after they left there was nothing to do. Everybody else would be dressing up to go out and we (other black students) would sit in the TV room and watch television. We may have been the hero of the game that day, but afterwards there was very little to hang your hat on."

Although things were much better with his teammates, Gossom says they were far from perfect. "Most of the guys were great," he says. "I had a couple of guys who didn't like me, not just because I was black, but also because I was a walk-on. In that time, with that terminology, I was called by some the "n-word walk-on."

Most of the team however, treated him like any other player, even if they didn't socialize off the field. "When you get in that huddle it doesn't matter if you are black or white," he says. "You are with those 11 guys for one reason and that's to win. So yes, we were great teammates."

Unfortunately for Gossom that didn't translate to hanging out after practices with his teammates. "We laughed and talked a lot around the athletic facilities, but beyond that we didn't have a whole lot together," he says. "It wasn't that I had a lot of guys doing things against me, it was just the times.

"I've even had a couple of guys tell me recently, ‘Thomas we just didn't know' - and I accept that," says Gossom. "We were all just kids. It wasn't their job to save me so to speak."

Gossom says he had a unique relationship with his head coach, Ralph "Shug" Jordan. More than 30 years after playing for the coaching legend, Gossom still speaks glowingly about the larger than life coach even though their relationship was far from friendship.

"I consider Coach Jordan a great man," he says. "I'm so glad to have had him in my life. He believed in class and dignity. I am proud to be one of Shug's boys."

Still, Gossom sounds like someone who missed out on a lot with his coach. "I wasn't close to Coach Jordan," he says. "But coach wasn't close to a lot of the guys on the team. I found out later that he was close to some of the guys. We weren't close, but we were trying.

"Initially, the attitude taken by the Auburn administration and the coaches was that they were not going to show any difference in us (black students) and the other students," he says. "But we were different. And we were living in a state that had always treated us differently. So it was difficult to not have anybody to go and talk to."

Gossom says that although he and Jordan didn't cross the bridge to friendship, his coach did a lot of good things for him. "When I left Auburn I had a first class education and I didn't owe any money," he said. "At one point, I had gotten a sickle cell diagnosis on campus that was a mistaken diagnosis. Coach Jordan paid every dime for me to get treated. I stayed in a Birmingham hospital for two days and the school took care of everything. There was a lot of good at Auburn."

Life as an Actor

The Road Less Traveled could easily be the title to Gossom's book. Just as he did more than 30 years ago, Gossom continues to take that path today. After working for many years in public relations for a Birmingham company, he caught the acting bug and decided to take a shot at Hollywood.

Gossom is an actor and producer who has appeared on numerous television series, including Boston Legal, Cold Case, NYPD Blues and In the Heat of the Night.

With the off-season approaching quickly for Auburn, I highly recommend this book to all Auburn people looking to fill their time away from the games. As time moves forward, we can all begin to appreciate more the struggles of Gossom and the path he made for future black Auburn athletes and students.