Share All sharing options for: For Alabamians, Saban More Popular Than God on Facebook. Apostles and Republicans Demand Recount. 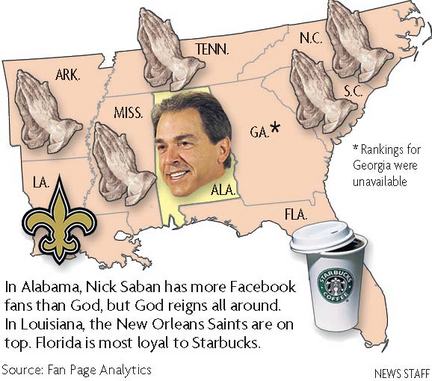 From the news of the weird today, I heard this one on the radio and had to look it up later just to make sure they were yanking our chain. According to a site which tracks such things, it appears that Alabama coach Nick Saban has more fans from the state of Alabama on the social networking site Facebook than even God does. You can draw your own conclusions on that one. By no means scientific or realistic, the number of people subscribing to certain fan pages seems to be consistent in certain areas of the country, with God usually coming out on top in most states in the south, but sometimes barely edging Starbucks or the occasional Chick-Fil-A.

Heck, the Saints now rule with Louisiana residents, and while allegiences to sports teams are nothing new, the worship of a specific coach is somewhat interesting, although not totally surprising in this case, as Jimmy Sexton might have had this adolation specifically written into Saban's contract as the Capstone threw him the keys while he deplaned that inbound flight from Miami. God's agent, while unavailable, did email that the Lord may want to discuss the matter in person and released his itinerary, which included a flight into Saban and Tuscamorrah later this week.

Oh, write your own damn jokes. It's what the comments section is for.