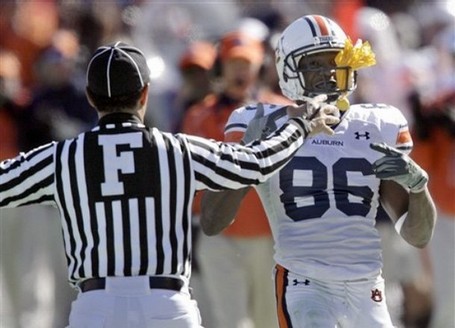 The NCAA football playing rules committee has announced some proposed rule changes, which must now be approved by the Playing Rules Oversight Panel. If you think that sounds an awful like trying to get health care pushed through both houses of Congress, well maybe that's overstating it just a bit, because this isn't double-secret legislation.

The biggest change comes in the way of penalties on taunting. If a player commits the act before he crosses the goal line, the penalty is assessed from the spot of the foul--negating the TD. If it occurs while in the end zone, then the same rules apply, with the penalty being assessed on the extra-point attempt, 2-point conversion try, or ensuing kickoff--depending on the outcome of a quick game of three-card Monty. The changes, which enjoy almost universal support, would take place starting in the 2011 season.

"Taunting and prolonged individual acts have no place in our game, and our officials have generally handled these rules well," said former Oregon coach Mike Bellotti, the committee chair. "This is just another step in maintaining our game's image and reflecting the ideals of the NCAA overall."

Oh really, Mike? If it was that important to you, why don't you just toss the player? Is that what Draco would have done?

Other rules changes suggested include:

Anyone got any other rules changes you'd like to see? Okay, a few for me: