Share All sharing options for: Tyrik Rollison to Transfer 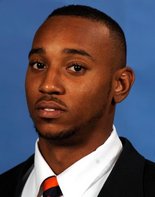 New reports are coming out that Auburn redshirt QB Tyrik Rollison will transfer to Sam Houston State, according to his father. Also, Rollison alledgedly posted on his Facebook status: "MOVING ON FROM AUBURN...I APPRECIATE EVERYONE WHO IS SUPPORTING ME.''

Rollison was suspended from the team this past December for unspecified rules violations, which in turn with the recent signing of Cam Newton, could have influenced his decision. He was the biggest name in Gene Chizik's first recruiting class and was expected to contend strongly for the position this spring, provided he got his head straight. As it stands now, his CFB career is looking more like Sam Houston Institute of Technology.