Share All sharing options for: Rollison's Departure A Cautionary Tale 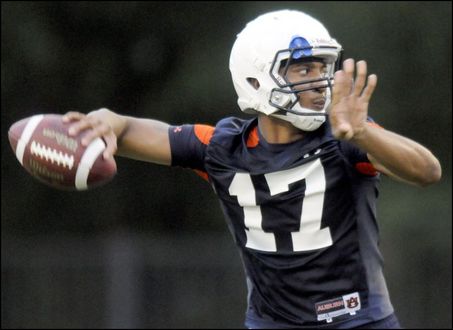 "He's a great kid and very humble. Loves to win. Tremendous competitor. At the same time, it's about his teammates. He could care less about how many passes he completes as long as they're being successful. He does a great job on the field of leading his teammates with his will to win. He's not a very vocal young man but he does it by his pure will on the field."

Those were the words spoken by Tyrik Rollison's high school coach, Greg Owens, after the four-star quarterback signed with Auburn last February. Rollison was the prize recruit of Auburn coach Gene Chizik's first recruiting class. According to Rivals, he was the number-two rated high school quarterback in the country. Simply put, he was the face of Auburn's future.

What a difference a year makes.

Rollison's departure is a cautionary tale for anyone who gets caught up in the national recruiting hype. And let's face it, in this day and age who doesn't get a little overly optimistic on the first Wednesday of each February?

There has been plenty of speculation this week over why Rollison chose to chunk his career for Sam Houston State. Was it his grades? Did it have anything to do with the year-end suspension that kept him from making the trip to the Outback Bowl? Was he homesick? Was it all of the above?

We probably will never know.

His high school coach said he was a tremendous competitor. Yet many speculate that he left because he knew it wasn't in the cards this upcoming season with Cam Newton and Neil Caudle expected to be the two primary contenders at quarterback. It would have been wise for someone to point out to Rollison that Chris Todd was in the witness protection program last spring.

It's easy for Auburn fans to dismiss his departure as a minor inconvenience. However, anytime you lose your prize recruit less than a year after he arrives on campus, it's a pretty big deal. He may not have competed for the starting job this year, but where will Auburn turn two years from now? How valuable would it be to have him around as a fourth-year junior?

There has been no outward indication that Auburn coaches worked hard to keep him on campus. That may tell us everything we need to know. I've argued more than once that recruiting is far from a perfect science. Maybe what Chizik saw on film was completely different from what he witnessed on the practice field. Tommy Tuberville missed with Kodi Burns. Statistically, good coaches miss about half the time. That's why quantity is such an important measure during recruiting season.

The most outward indication of trouble for Rollison came a few weeks back when Auburn coaches made no secret of going after several high school quarterbacks who will be playing as seniors this fall. On the surface it looks like Gus Malzahn moved quickly to cut his losses.

As Malzahn enters year two on the Plains, he's yet to find the perfect quarterback for his spread offense. Most believe Newton is the real deal - a sure bet. But then again, we heard the same thing last year about the hot shot kid from Texas. Malzahn has earned the right to be given the benefit of the doubt. Rollison may have lacked the intangibles needed to play quarterback in the SEC. Let's just hope Auburn coaches find their man by late April.