Share All sharing options for: Utah to the Pac-10? 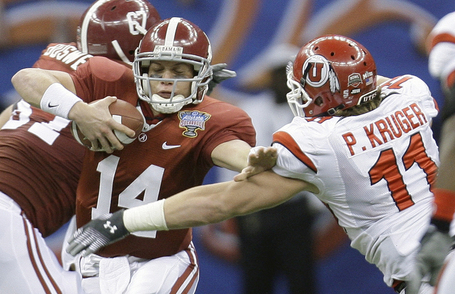 JPW is an Atlanta Falcon now, so leave him alone.

A Salt Lake City TV station is speculating that sources may be indicating that Utah could possibly be invited to join the PAC-10 at some point in the near future, and that Colorado might defect from the Big 12 as well. Again, this is pure speculation, but what else do we have to hold onto during the dead season between NSD and spring drills? Now much of this folly hinges on anticipated moves that a Big 10 expansion might bring, so keep that in mind. Should the Big Ten go to divisional play, that would leave the PAC and the Big East as the conferences left out in the cold, and we know that the traditional Rose Bowl participants are monkey see, monkey do.

The PAC's TV contract is expiring soon and the gold standard now is to have a conference championship game, especially if you ever hope to attract SEC-like money. But why let the Big Ten choose first? With only three independents out there and little chance of landing Notre Dame, the prime reason might be that the ripple effect will only be a east-coast, west-coast thing. Poaching teams from another conference is going to be like a game of musical chairs, but in the end, smaller teams may get a seat at the adult table of established conferences and larger teams may scramble to moving on up to the east side..

The Mountain West may lose Utah, but would it pick up another team, merge back into the WAC, or fold, with members falling where they may? What about MWC stablemate BYU? Why wouldn't the PAC look to draft BYU instead of poaching Colorado from the Big 12? Seems that BYU doesn't play any sporting events on Sundays, for religious reasons, and the PAC-10 homey don't play dat. Alas, greener pastures with the Denver TV market might be in the sites of new commissioner Larry Scott. If Colorado did make the jump, and being landlocked by oh, say 1000 miles, could a conference name change be forthcoming? Maybe The Big PAC-12 with Ocean Front?

And why no respect for the Big 12? Seemingly, they're mentioned more often for losing members than the Democratic National Convention. Missouri to the Big 10(11)12)? Now Colorado to the PAC? Someone check the seams from when they welded those guys together from the old Big 8 and Southwest conferences. Does no one like playing with those Texas boys besides Arkansas? Regardless, teams must give at least one year's notice of departure, so for football, that means if they declared by sometime this summer, they wouldn't actually play in the new conference until the 2011 season.

And how'd you like to be the scheduler for that?