Who is Ken Rice?

Share All sharing options for: Who is Ken Rice? 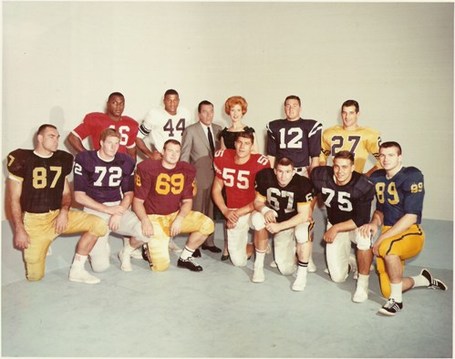 Ken Rice on the set of the Ed Sullivan Show. He's on the front row, second from right.

When it was announced last week that former Auburn lineman Ken Rice had been placed on the ballot for this year's College Football Hall of Fame, many Tiger fans were undoubtedly left scratching their heads, wondering, ‘Who is this guy?' How quickly time moves on.

For older generations of Auburn fans, Rice is no stranger at all. He anchored one of the best offensive lines in America back in the late 1950's. A two time consensus All-American, Rice was voted the top offensive lineman in the SEC in both his junior and senior seasons. But he didn't stop there. He was also named the top defensive lineman in the conference during his senior season of 1960. Undoubtedly, he has to be one of the few, if not the only player in SEC history to receive both honors in the same year.

Rice was named to the SEC's All-Sophomore team as a tackle in 1958 despite playing behind All-SEC selection Cleve Webster. He went on to be a first round draft pick by both the AFL and NFL and was named All-Pro as a rookie with the Buffalo Bills.

While playing for Shug Jordan, Rice helped lead Auburn to a 24-5-1 record. Unfortunately, he never tasted the fruits of his labor. "Auburn was on probation when I joined the team but was due to come off," he recounted recently to Big Canoe News.com. "However, due to an additional violation, the team was on probation for a total of five years, including my entire time at Auburn."

With all the sports news online today, it's easy to gloss over a story such as Rice's. It's important that Auburn fans never forget those who laid the foundation for what the program is today. Simply put, Rice was one bad dude - and I mean that in the best of terms.

Sure all of his pictures from his playing days are in black and white, but even by today's standards, his accomplishments on the field take a back seat to no one. Let's all say a prayer and keep our fingers crossed that Rice becomes the 13th Auburn player to be enshrined into the College Football Hall of Fame.