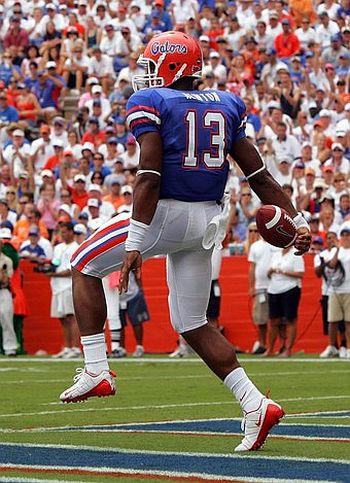 Will Cameron Newton lead the Tigers?

War Eagle, everybody! The wait is just about over. In about a week, the Auburn Tiger football team will take the field for spring drills. After what seems like months of gray days, we'll get a first glimmer of information about how the 2010 team will look. There are many questions to be answered. The Tigers must replace two starting defensive linemen, a lockdown corner, a punter, a starting offensive lineman, the starting tight end, and two backfield folks that accounted for 70 percent of Auburn's offensive yards. Out of 5613 total yards on the 2009 season, Ben Tate and Chris Todd accounted for 3963 of those yards. Can the Tigers find depth this spring? It's basically the same crew that took the field last year, minus several key seniors!

Last spring, it was a big mystery what might happen. This year, we have a better handle on the Gene Chizik Auburn Way. If Gene mentions that a player is "day to day," it probably means that player won't see meaningful playing time. Remember how this was with Tim Hawthorne, Mike McNeil, Spencer Pybus, DeAngelo Benton, and others? Unlike Tuberville A-Days, what we saw on A-Day last year was pretty much what happened on the field last fall. Defensive depth was not there, and we had big problems at safety. Onterio McCalebb, Ben Tate and Darvin Adams ran wild, making big play after big play. We had quarterback problems, so much so that Chris Todd was able to come off the taxi squad and win the starting job 11 days into fall camp. Terrell Zachary scored on an end-around that would be repeated several times during the season. We were kind of shaky at tight end and blocking back. All of those things were seen during A-Day, and came to pass during the 2009 season.

For those expecting a lot of instant fixes due to our banner recruiting year, this spring won't be the time to see it, for the most part. We do get a few new players to add to the mix. There were fab freshmen such as safety Darren Bates (who is moving to linebacker, BTW) who came in last fall and made a major contribution. These guys will be going through their first spring drills. In addition, Auburn signed several early enrollees, and of these, all eyes are on Cameron Newton. Newton was the backup quarterback at Florida two years ago, and won a JUCO national championship last season. Despite what you may hear from the Auburn coaches, the starting QB job is Newton's to lose. Newton may be the first 5-star quarterback Auburn's ever signed.

In general, Auburn will face many of the same issues that plagued last fall's team. The defensive line gets thinner with the departure of Antonio Coleman and Jake Ricks. Auburn must build depth behind starting tackles Mike Blanc and Nick Fairley. Starting ends will likely be seniors Antoine Carter and Michael Goggins. Behind them is a whole lot of green. Auburn will be looking for youngsters such as Derrick Lykes, Dee Ford and Nosa Egaue to step up.

At linebacker, Auburn returns veterans Craig Stevens, Josh Bynes and Eltoro Freeman. Behind them, only sophomore Jonathan Evans has any meaningful playing time. Auburn adds former safety Darren Bates to the linebacker ranks, and incoming early enrollee Jessel Curry could have an impact.

The mission in the secondary is to replace the loss of All-SEC corner Walter McFadden and safety Darren Bates. The good news is that injured veterans Mike McNeil and Aaron Savage return. They may well be the starting safeties. Zach Etheridge, who suffered a horrible neck injury against Ole Miss may be back, but spring participation is doubtful. Auburn will look to Mike Slade and Drew Cole for depth. Auburn will likely start with Demond Washington and Neiko Thorpe at corners. They will be challenged by T'Sharvan Bell, who had some fine moments in the Outback Bowl. D'Antoine Hood will be counted on for depth.

At punter, we will see whether Ryan Shoemaker can return to his freshman All-SEC form of a few years ago. He made a number of great punts then, but has been plagued by injury since. Punt returner was a huge liability last season with the dropped balls, and I honestly have no clue who'll emerge this year. I can't imagine Demond Washington repeating there again. I don't think you want your starting corner getting worn out on special teams! Among returning kick returners, Mario Fannin and Onterrio McCalebb have experience. Wes Byrum and Morgan Hull return as kickers. I think we'll be set, there.

On the offensive line, starters Lee Ziemba, Byron Issom, Ryan Pugh, and Mike Berry return. The right tackle spot is open, and Auburn signed two JUCO players (Roszell Gayden and Brandon Mosley) to try to take it. That's not the only option, though. I look for Mike Berry to move to right tackle, and Bart Eddins to take Berry's guard slot. Auburn has several young linemen who'll try to develop this spring, including John Sullen, Jared Cooper, and Jorell Bostrom.

Returnees with experience at tight end include only sophomore Phillip Lutzenkirchen and Jay Wisner. I expect that Robert Cooper and Bailey Woods will get a look here as well.

Wide Receiver is the deepest position on the team, returning a lot of experience. Only Darvin Adams was consistent last season, though. There will be fierce competition for playing time in a cast that has incumbent starter Terrell Zachary, and includes DeAngelo Benton, Kodi Burns, Emory Blake, Derek Winter, Phillip Pierre-Louis, Anthony Gulley, and Quindarius Carr. Last year, transfer Ralph Spry had a big spring, but had to sit out 2009. He may be a factor this year.

The H-Back position has everyone back, but Mario Fannin is evidently moving to tailback. Eric Smith was a very dependable option last year. Auburn will be looking to build depth. John Douglas was primarily a blocker during his stints here. Highly touted redshirt freshman Dontae Aycock will get his first chance to impact the Auburn offense at this position. There's no doubt he can run, but can he handle the blocking and receiving duties required?

Auburn is Tailback-U, and the next candidate for a thousand yard season is senior Mario Fannin. Past knocks on Fannin have been ball-security and injury. However, you can't ask for a better Auburn man who has kept his nose to the grindstone and done whatever the coaches have asked without complaint. Here's hoping Super Mario has that breakout year! Onterrio McCalebb looks to reprise a year that started with a bang, and fizzled with ankle injuries. There is NO depth currently behind Fannin and McCalebb. H-backs Eric Smith and Dontae Aycock can fill in, but create a void in the H-back rotation. It's the first time since 1999 that Auburn is thin on running backs! We're an ACL or two from disaster...

Auburn has a quarterback race for the third season in a row. Of all the candidates, only Neil Caudle has experience in the heat of battle in an Auburn uniform. He acquitted himself well in limited action last season. Transfer Cameron Newton has all the tools to win the job, but is in his first year in the offense. Youngsters Barrett Trotter and Clint Mosely have talent, and will get a look. Regardless of who wins the job, Auburn will be more mobile at quarterback. I think every one of this year's candidates have a stronger arm than Chris Todd. However, we won't have that 5th-year senior leadership Todd provided. It will be an interesting race, I think.

It will be a fun month upcoming, scouring the internet for news from spring drills! I can't wait for A-Day! With some injury luck and development this spring, I think the Tigers have a chance at a much better year than 2009. Also, if you haven't seen it yet, check out the new interactive page from the official Auburn website, here. It's an amazing panorama of Auburndom, with a great blend of old and new sounds. If that doesn't fire you up, you are probably dead! Very, very impressive! War Eagle!