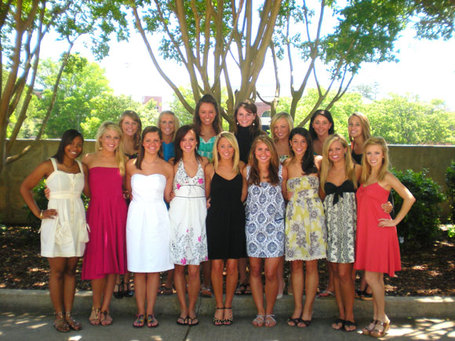 Has Spring sprung? With only one day looming before spring practice begins, the biggest question on most fans' minds is where is the spring? Monday morning it snowed and hailed briefly here in Atlanta, but it looks like more temperate weather for the rest of the week. I'm looking forward to heading down to the Plains next month, seeing the game, and working on my base farmer's tan. There are so many battles for positions that will be crucial. Everyone wants to see who will end up at QB, but the linebacking corps may be more key. Offense usually gets the press, but we still play defense in the SEC, and Ted Roof has his work cut out for him this year.

One position near and dear to me is the running backs. Acid Reign touched briefly on this group last week. By all indications, it looks like Mario Fannin will be moving to tailback from the H slot, and I for one am very happy to see that. No one deserves a shot at it more than Fannin, who only has one more year to showcase his potential NFL talent. We already know he has great hands, plus, he's a hard man to bring down, just like Ben Tate was.

I'm convinced that you need a bigger featured back in this league that's going to bounce off initial hits and gain more yards after contact. I loved the one-two punch of Tate and McCalebb early in the season last year--power and speed--but I knew that the fleeter Onterrio might get banged up and I was right. I'm all for for mixing it up constantly--I'm still a two-back kind of guy--something I'm hoping to see a little more this year even out of the shotgun. But I think our best bet might be with Eric Davis. For my money, he was the most under-utilized offensive player last year. He has terrific receiving ability--and not just for screens. He caught many an intermediate ball last year from the H-back position and he has great open field moves. Plus, he has the requisite size to keep taking a pounding every week.

Oregon's AD and former coach Mike Bellotti abruptly resigned his position last week and will now join ESPN as an analyst both in the studio and in the booth. Bellotti, who only relinquished head coaching duties with the Ducks after the 2008 season after 14 seasons, is reported to want to get back to the game. His tenure as AD in Eugene has not been without controversy, as a number of player arrests and other high profile incidents has occured under his watch. So what's his first assignment in the booth for ESPN? Calling Auburn's spring game on ESPNU. Welcome to the Plains, Mike.

A good read on Tubs on SI.com is available, contrasting his classic southern style with that of his predecessor, the highly unpredictable Mike Leach, Esquire. Noted is the lack of a display of Tubs' coaching past in his new office, with the exception of pictures of Ray Lewis from his days at Miami and his first-round backfield combination of Jason, Ronnie and Cadillac. It mentions his hiring of OC Neal Brown, from Troy of all places, and of course most of us knew that James Willis was lured from Alabama to become Tuberville's new DC. I wonder if Will Muschamp might consider poaching Willis from Tubs when he finally assumes the mantle in Austin in 2019?

Considering the circumstances he walked into--the FUBAR firing of Leach and the resulting lawsuit, the high profile cry-babying of Craig James, and a fanbase that had just tasted more success than any other decade in their history, it seems that Tubs is handling it as well as we Auburn folk would expect from him--with class. The Air Raid offense is still in--for now. We are talking Tubs here. Hiring Brown from Troy might seem eerily reminiscent of the Tony Franklin system debacle, but he swears he has the right pieces in place now--including a staff and a fanbase that will buy into it. Ouch? Now if he could only get those guys to play some defense. That I do believe...

And from the blotter: Current Miami Dolphin RB Ronnie Brown was arrested for DUI friday night in the metro Atlanta area. I, like all Auburn fans hate to hear that. I certainly hope that this is an isolated incident and the only advide that I can offer is that next time, let Ricky Williams be the decoy.