Notes from Day 1 of Spring Football

Share All sharing options for: Notes from Day 1 of Spring Football 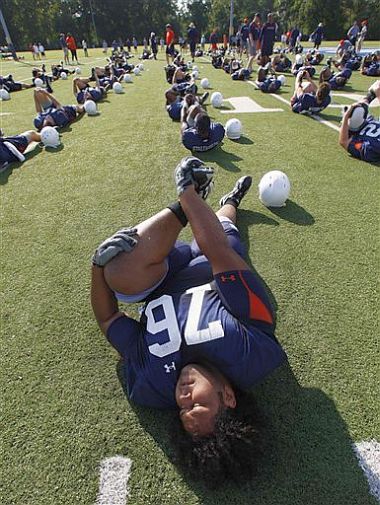 Tigers take to the practice field!

War Eagle, everybody! Warm weather has finally returned and with it, spring football! Auburn had their first practice of the year yesterday, and according to head coach Gene Chizik, they are shaking off the rust. I think most Auburn fans out there can't wait to see how the Tiger quarterbacks throw the ball. Alas, the most you're going to see out of a slew of practice videos out there is a few option-pitches. We know what Neil Caudle looks like throwing the ball (pretty good!), but Trotter, Mosely and Newton are making their debut at Auburn spring practice. "Will he stay or will he go?" Tyrik Rollinson was not present at yesterday's drills, and word is that he's still in school, finishing the semester.

It wouldn't be practice time at Auburn, without more news of players leaving. Whatever else you might say about Gene Chizik, he's really pruned Auburn's roster in a little more than a year. H-backs John Douglas, and Jason King; as well as kicker Morgan Hull and offensive lineman Darrell Roseman have all left the team. Douglas and King were suspended for DUI incidents prior to the Outback Bowl. Hull has already graduated, and would have been a senior. It's the same story for Roseman. With a degree in hand and little playing time likely, Roseman has moved on. Tight end Bailey Woods was reported earlier in the week to have transferred to Georgia State. The depth picture in the offensive backfield gets scarier.

While offensive coordinator Gus Malzhan has not mentioned any H-backs behind Eric Smith, the tailback roster was revealed. Gus names Mario Fannin, Onterrio McCalebb and Dontae Aycock, in that order. Rumors of Aycock to H-back may have been premature.

On the veteran offensive line, the Tigers are looking to replace one departed starter, at right tackle. Getting the first reps with the ones was JUCO transfer Brandon Moseley. Roszell Gayden ran with the twos. Obviously, this rotation isn't yet set in stone, but it's interesting nonetheless. Bart Eddins and Jorell Bostrom (pictured above) alternated at the number one right guard spot.

At safety, 6th-year senior Aaron Savage looks ready to play today. After a two-year hiatus with injuries, I'm sure he's glad to be back! Linebacker Eltoro Freeman and running back Onterrio McCalebb were noted as having significantly bulked up in the off season.

In football, you have injuries, and this spring is no exception. Safety Mike McNeil is apparently STILL limited from a broken leg from last spring. Uh oh. That doesn't sound good at all. Darren Bates, who's moved to linebacker from free safety, was in an orange "no contact" jersey. Bates had shoulder surgery at the end of the season. Zach Etheridge did not dress out for this practice, and is unlikely to do much this spring after his neck injury last fall. Offensive guard Mike Berry was at practice, but did not participate, due to various injuries.