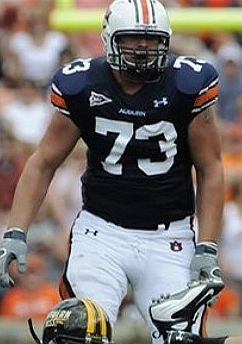 Wins Auburn's QB race, hopes to be the next Jared Lorenzen.

War Eagle, everybody! And of course, April Fool! It's no wonder some folks won't go near the internet on April first. All tomfoolery aside, it's spring football time, and the Tigers have completed five practices. Although most of the practice time has been closed to the press and public, interesting details leak out daily. This Auburn spring team is starting to take shape!

No, the quarterback race hasn't really been decided. And we are certainly in good enough shape that the coaches aren't really considering robbing the offensive line! Quarterbacks coach and offensive coordinator Gus Malzhan has praised every candidate, and opines that we are far ahead of last spring. Gus has reserved the most quotes for Neil Caudle and Cameron Newton. Of Caudle, he says that the 5th year senior "knows the offense as well as I do." Newton is said to possess amazing physical tools, but is still struggling with the intricacies of the offense. I maintain that you don't sign a five-star JUCO quarterback to sit on the bench. If Newton can rifle the hitches, quick outs, slants and screens accurately, he starts. If not, Caudle's the man. Most of the comments on Barrett Trotter and Clint Mosely have been of the "progressing" variety.

More spring details after the jump!

Also receiving the "progressing" vagueness are the running backs, Mario Fannin, Onterrio McCalebb, and Dontae Aycock. Fannin is said to possess a special "urgency" this spring, and McCalebb is supposed to have added significant muscle without losing any speed. All three backs have made plays. Where questions remain in the backfield/blocking positions are at H-back and tight end. We know that Eric Smith is a very capable H-back. The rest of the depth chart from a year ago is gone. Heir-apparent tight end Phillip Lutzencirchen has evidently missed a significant amount of practice, being "dinged up." With the departure of Bailey Woods earlier in March, I wonder who's out there at tight end? Jay Wisner? The offense may well resemble a Mouse Davis run 'n' shoot, rather than the I/pistol look of a year ago.

There are indications that the receiving corps will be deeper than a year ago. Emory Blake and DeAngelo Benton are said to be making moves, and transfer Ralph Spry has turned heads. Spry did well in last year's A-Day game, after transferring from Minnesota.

Auburn has a chance to have a dominant offensive line this season. Mike Berry is out for the spring, but by all accounts replacement Bart Eddins has done well. Auburn brought in two experienced JUCO tackle candidates to replace the departed Andrew McCain. Brandon Mosely and Roszell Gayden are said to be up to the task, although they are still learning the offense. At this juncture, Mosely might be slightly ahead in the right tackle race. It's the conundrum of spring football, to celebrate apparent strength, and worry about at whose expense the praise comes. The Auburn defense was called out by head coach Gene Chizik for being blown off the ball in run defense. Ouch. Is that a tribute to the offensive line, or do we have a glaring problem up front on D? Time will tell.

There's been quite a committee of punt returner candidates, and strange drills. One drill had the return man watching the ball in till it hit him in the facemask. That really made me uncomfortable watching it. We saw it happen with regularity on the football field last fall! I think we all know the quote, "you play like you practice!" In other special teams news, Ryan Shoemaker seems to be punting the ball well, and might be poised to have a solid year.

The most impressive performer of Auburn's secondary unit has been Demond Washington. Veteran Auburn beat writer Phillip Marshall used the "all-SEC" term when discussing Washington yesterday. Neiko Thorpe and T'Sharvan Bell are having solid springs. The move of Washington and Bell to corner speaks to the health of Aaron Savage and Mike McNeil at safety. Would they move those guys, if McNeil and Savage weren't ready? Last year's A-Day was a horror show at safety. Here's hoping things have improved dramatically!

The most bizarre moves of the spring have been at linebacker. Not only has starting free safety Darren Bates been moved to linebacker, but the two starting outside linebackers have switched sides. Eltoro Freeman is now the strongside backer and Craig Stevens plays the weak side. Stevens isn't a total greenhorn on the weak side, having spent 2006 and some of 2007 there. Stevens also has fair coverage skills. The move of Freeman to the strong side is stranger. I've still got nightmares of Freeman being plowed under by the Georgia line last season. We can only hope that The Bull has added muscle! Gene Chizik has gone public with the assertion that Auburn will need depth help from the incoming freshman class, although there are also words of praise for incoming "grayshirt" Jessell Curry.

Little has been said about the defensive line except "blown off the ball." It's pretty rare for coach Chizik to call out a unit like that, so a fair amount of worry is in order. Dee Ford, who's running 2nd team behind Antoine Carter is stronger and 20 pounds heavier than a year ago. The return of Nosa Eguae should give Auburn some depth at the defensive end/pass rusher slots. The tackle position is the real worry. We're still waiting to see Nick Fairley break out. If not, we may be seeing incoming signees such as Jeffery Whitacker stepping in immediately.

The bottom line is that Auburn needs to show dramatic improvement in the front seven before September. The Tigers gave up a record number of points in 2009. If the situation up front doesn't pan out, we could see similar numbers in 2010. It's still difficult for me to grasp the enormity of last year's defensive holes. Every defense Doug Barfield put on the field was better. Even Earl Brown in 1950 didn't field a defense with that big a points per game average. We need to return to the Gene Chizik numbers of 2002-2004. Auburn gave up only 15.1 points per game during Chizik's tenure as defensive coordinator.

War Eagle, and have a great April Fool's Day!