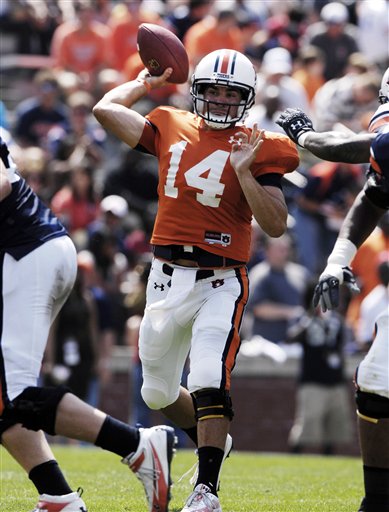 I think Acid Reign nailed it yesterday in his summary that never have we had a bigger spring game that showed so little to so many in so few minutes. Chizik showed that his middle name might be Copperfield as he mastered the fine art of illusion and deflection to the point that even I had trouble recognizing us. Granted, anyone expecting earth-shattering decisions to be made this weekend might have just been caught up in the hoopla of having the game covered live on ESPN--something that had never happened on the Plains before. I don't think that Mean Gene is comfortable yet bringing his cards off his vest, and the only decision on QB forthcoming would have been a result of something like this.

I missed the live broadcast Saturday, because I was preparing to go watch the Braves get no-hit, but set the DVR to catch the replay on Comcast on Sunday. Somehow, they got their wires crossed over there and were running over an hour and a half late, so I got to watch only 22 minutes of the game last night. Luckily, I was able to catch the rest online today. Like many of you commented yesterday, you go to support the team, but the game itself is what it is. Hopefully, you got to enjoy the pretty day. It was great to see virtually the entire lower ring filled with fans. Something like that really adds to the enthusiasm that not only we fans have for the program, but that the media seemingly does as well. Mr. College Football, Tony Barnhart, was in Auburn yesterday, so be sure to catch his comments today.

NOW PAY ATTENTION: THIS IS THE WAY TO TRASH TALK. OR IS IT? 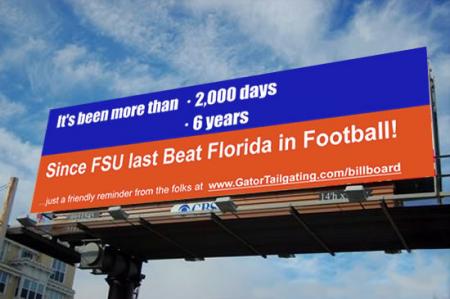 Buried in the trash (talk) heap last week was this little gem about how a Florida fan site has proposed to erect a billboard on I-10 outside of Tallahassee extolling the length of the winning streak that the Gators have enjoyed over their arch-rivals, Florida State. The picture above is a depiction that the site gives to what the billboard will look like. They claim to have secured funding for at least one month's display, but hope to have enough donations to carry them from June all the way into November. If they carry this plan out, could they possibly elevate CFB rivalries into the commercial arena? Will this lead to a trash-talk display arms race in the state of Florida with advertising as the weapon? What will Ron-Jon Surf Shop do if all the available outdoor advertising space is used up? Sell a whole lot less conch shells and air brushed license plates, I'm guessing.

And while most of us are wondering why some Auburn people didn't think of this instead of holding up some fingers a few years ago, others are thinking that this whole idea seems vaguely familiar. Regardless, isn't internet flagellation enough? Do we have to take it to this level? I mean, somebody's grandmother can see this. Before you answer, just remember: Auburn has an interstate through it and we will soon be coming up on our own thousand days' mark.

In what has to be the longest investigation EVER, the USC football program still awaits a decision by the NCAA to what their penalties might be over playing an ineligible Reggie Bush. But in the meantime, it appears that Reggie Bush will finally get his day in court and can tell one and all his side of the improper benefits package he and his family alledgedly received during his playing career with the Trojans. Bush, who has repeatedly dodged the chance to set the record straight in court, had hoped for arbitration in the civil suit from agent Lloyd Lake, who claims to have given Bush over $300,000 in cash and benefits during his stint in L.A. to lure him as a client.

Bush must now give a deposition April 23 to the facts concerning the issue, and it's doubtful that someone so self-absorbed will now potentially jeopardize his NFL career and freedom by failing to be 100% truthful. You just can't help but think that this is the day of reckoning the NCAA has been waiting on to drop the hammer. They never had a chance to interview Bush, who bolted for the NFL a year early. At stake could be his Heisman trophy AND USC's national championships in 2003 and 2004. If Bush is ultimately deemed to have been ineligible for games in those years, the Trojans could be forced to forfeit or vacate their crowns, possibly leaving a vacuum in the latter year for CFB's biggest prize (LSU won a split title in 2003). Some of you may think I'm crazy, but just wait until this domino drops. There may have been a year without a Santa Claus, but there ain't gonna be no year without a national champion!