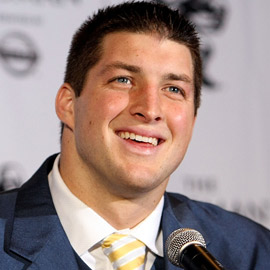 Okay, I admit. I was kinda rooting for Tebow in the draft. A little...

I didn't pay any attention to this year's NFL draft. It's gone too Hollywood for me. Prime-Time and all. It used to be on a Saturday afternoon and you could check in periodically for the updates and get them without being bombarded with all the hyped coverage. Besides, Auburn wasn't slated to have as many picks this year as in years past--especially the 2005 draft. Ben Tate wound up right about where we thought he would--mid 2nd round (58th). Walt McFadden was the 5th round (138th) to Oakland, and if you read Aubtigerman's piece yesterday on Antonio Coleman, you know he was undrafted initially, but ended up signing with the Buffalo Bills and will attempt to make their team. He's got a long road ahead of him, but I wouldn't write him off just yet.

What I did expect was a very big day for the SEC, and I was not disappointed. Forty-nine out of 255 picks came from the Southeastern Conference. The next biggest total came from the Big Ten. The rest of the conferences were also rans. I was prepared to give a nice homer diatribe about how the SEC wasn't planning on surrendering it's draft crown anytime soon, but I read an excellent piece by Clay Travis over at the Fanhouse that stole most of my thunder. It's a must read, as Clay lays down his top reasons why the SEC is now the premier conference in draft picks as well:

1) SEC Recruiting classes are the tops in the nation:

Need he go on?

2) Momentum "Bump" for simply playing in the SEC:

Everyone now knows that the SEC is the best conference, and players are simply given the benefit of the doubt over a player of another conference, all other things being equal. Some may know it as to the victors go the spoils, or king of the hill. Seems we can all thank four solid years of Tebow coverage for this. Will some grad student somewhere plueeeze do a dissertation on this phenomenon?

"Fans like to believe that today's top recruits are aware of college football's illustrious past, that they're conversant about each of our programs' storied histories. In reality, of course, they aren't. Nope, kids pay attention to the games from the times they were 13 to 18, about a five year window of interest. What are today's rising players going to remember? An unparalleled string of SEC dominance." So TRUE. Someone macrame that onto a picture and I'll buy it to hang on my office wall.

SEC schools now recruit nationally--something that only Notre Dame and maybe one or two other schools used to be able to say. The word and the genie are out. Film at eleven.

A $3 BILLION dollar contract for the conference and virtually every single same on somewhere. Kids want to be on TV. SEC games are like ninjas--they're everywhere. The name of the new SEC network was a pretty simple acronym mashing--CBS-ESPN. Done. SEC games broadcast nationally beat the tar out of regional games in their own home networks. This is people voting with their wallets for a superior entertainment product.. Done. Game over. New one airing soon.

Just like football is a game of momentum, so are other things in life, and the perceived momentum of the SEC at this moment is unassailable. We're like the Roman Empire at it's zenith. The only game changer will be a drastic altering of the conferences--which may very well come to pass. Soon.

Naturally, there are still the intangibles that are hard at work contributing to the success of the conferences. Perhaps a bit inane or just downright silly, I feel strongly that they are nevertheless prominent in the minds of some of the best players, who in turn fill out the ranks of the best draft picks. My list:

1) Weather: Spring ball in 70 degrees, opening games in the 90s (okay, not exactly something to tout too loudly) and very mild late season games. I went to the Georgia game in short sleeves and no jacket. You get to wear shorts for half the season. Also, SEC bowl tie-ins ensure you never end up in Boise or San Francisco. Go see a bowl AND take your family on a Florida vacation. Multi-task!

2) Pretty Girls: The reason I personally didn't end up as a student on The Flats in Atlanta--Auburn had prettier girls than Georgia Tech. For young men, you can't underestimate the importance of this. The south has prettier, sweeter girls. Call me a homer. You can stock your recruiting hostesses long on lookers, but when a recruit walks around the rest of the campus for three days and sees that pretty coeds are three-deep on the roster, you can believe they take notice.

3) Big Ole Stadiums Filled to the Rim: The SEC is the premier leader in attendance and we have the largest stadiums of any conference. When you build it, SEC fans DO come--in droves. Hell, some of the high school stadiums in the south rival what some large programs have. Everybody with NFL talent needs to showboat--and doing it with 85,000 of your closest friends is the way to go.

4) Everyone and Everything is Already Migrating to the South: The whole country has taken notice of what the south offers--great job opportunities, low taxes, less government B.S., friendly people, and a growing business climate. Chances are, a recruit from somewhere north may have half his family all set to move down. Gotta be with the clan for Christmas!

What did I leave out?