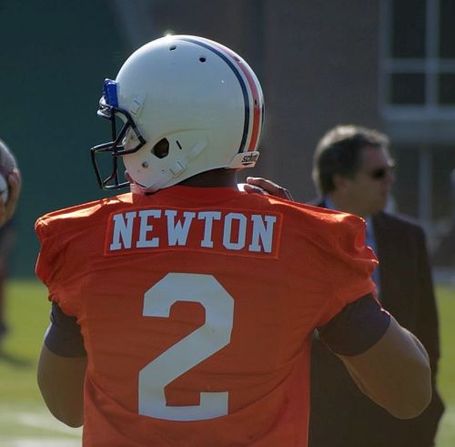 Auburn has a starting quarterback in April for the first time in three years!

War Eagle, everybody! Despite spring practice being over, football-related news continues to trickle out of the loveliest village on the plains. The Tigers stay in the state sports headlines, and in the news continues to be good! In the coming weeks here at TrackEmTigers.com, we'll be providing 2010 scouting breakdowns for each team on Auburn's schedule, starting with the Auburn Tigers themselves, next week. Stay tuned!

The news of the week was announced yesterday, when Coach Gene Chizik named Cameron Newton as the number one quarterback at the end of spring drills. "After thoroughly evaluating our quarterbacks during spring practice and over the last week, Cam has emerged as our post-spring No. 1 quarterback," said Chizik. It's nice to have a starter defined, but this endorsement falls somewhat short of last year's "Chris Todd is our man" statements. My thoughts are that Newton will have to keep his nose to the grindstone to keep the job. The other three quarterbacks looked very impressive on A-Day. We knew Newton was likely to start from the beginning. As many have said, you don't sign a five-star JUCO prospect to sit!

Tiger Prowl 2.0 kicked off this week, with the Auburn coaches showing off a custom Auburn-decorated tour bus. Yes, it does look a bit like a promotional vehicle for a new flavor of energy drink, but I think it's great to market the program in a trendy fashion. I particularly enjoyed hearing about the addition to the trip of new basketball coach Tony Barbee. Often, there is tension between basketball and football programs at major colleges. At a football-centric school like Auburn, the basketball folks can feel like an afterthought. Kudos to whomever was responsible for Barbee being included. This can only add to the "family" atmosphere the current Auburn staff has created.

Auburn had a pair of players drafted last weekend by the NFL, Ben Tate and Walter McFadden. There was one surprising omission from the draft, SEC sack leader Antonio Coleman. Tate went in the 2nd round to the Houston Texans, in a bit of a surprise pick. The Texans had needs elsewhere, but apparently liked what they saw from Tate. It will be a challenge for Tate to get carries in a crowded Houston backfield that includes former Vols Chris Henry and Arian Foster, as well as the electric Mountaineer Steve Slaton, and veteran Louisiana Tech alum Ryan Moats.

Walter McFadden was selected in the 5th round by the Oakland Raiders. McFadden joins a team with problems across the board, including the secondary. One side of the Raider D sports All-Pro California product Nnamdi Asomugha. There is opportunity on the other side, as McFadden will compete with veteran journeyman Chris Johnson, and rookie Jeremy Ware for playing time. McFadden may well start this season. He joins a number of former Auburn players in Oakland, including Jason Campbell and Quentin Groves. The Raiders can only get better with 3 Auburn guys playing major roles!

Despite not being drafted, Antonio Coleman should have the opportunity to play early in the NFL. Coleman signed a free-agent contract with the Buffalo Bills, and should add some pass-rushing muscle to a team that managed only 32 sacks in 16 games in 2009. Jake Ricks signed with the Indianapolis Colts, which is also a great opportunity. Aside from star Dwight Freeney, the Colts always seem to be having issues on the D-line.

I'm not normally one to pen much about our rivals in Tuscaloosa, but I do have a thought on Alabama's current scheduling protest. Alabama has complained to the league office that six SEC opponents have bye weeks prior to playing Alabama. As a Tiger who followed the team through the 70s, 80s and 90s, I have little sympathy. Year in and year out, Auburn finished the second half of the season with Florida, Georgia and Alabama in late October thru November. Occasionally, we'd get top-5 Florida State and a tough Mississippi State team thrown in there as well. Coach Pat Dye referred to it as "Amen Corner." Meanwhile, Alabama enjoyed a schedule that included Vanderbilt and Ole Miss every season. Cry me a river! The schedule I'm most envious of belongs to Tennessee in many past seasons. The Vols play some tough games early, then finish with South Carolina, Kentucky and Vanderbilt every year. They might get their nose bloodied a few times early, but November allows the Vols to regroup and build depth. Many a shaky Vol season has finished with a winning streak, and a New Year's Day bowl appearance.

Finally, Auburntron is reporting that a group of students is making a Facebook push for an Auburn hockey team. I applaud them! Hockey is a brutal, violent sport much like football. I love to watch when the offense dumps the puck into a corner, then both teams try to dig it out. It's like one of those Ultimate Fight matches! I spent many of my adolescent years in the Birmingham Jefferson Civic Center cheering on the Birmingham Bulls. Hockey is not so great to watch on TV, but is loads of fun to attend! Big question: where would they play? I think the nearest ice rink is 2 hours away, in the Birmingham suburb of Pelham.

War Eagle, and have a great Thursday!