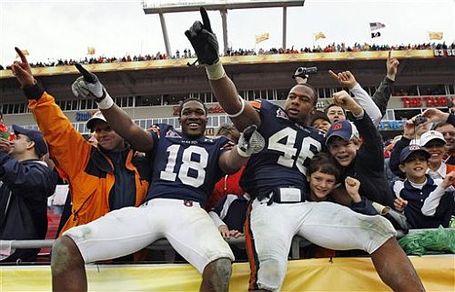 Tiger seniors hoping to kick it in 2010!

War Eagle, everybody! We're about halfway through Auburn spring football drills. How is camp going? Honestly, your guess is as good as mine. As Jay said earlier this week, there's an Iron Curtain around the meat of the sessions. I hate to say it and jinx the team, but the best news thus far is a relative lack of serious injuries. It hasn't been an injury free camp, of course, as Phillip Pierre-Louis and Bart Eddins will attest. But thus far, we haven't seen anyone scratched for the fall. Thank God for that!

The coaches have been quiet on the quarterback race thus far, but there's no denying that transfer Cameron Newton is getting more reps than anyone else. The only turnover we've gotten word of from Cam is a sack-strip-fumble in last Saturday's scrimmage. Considering how common those were last season, I'd tend to doubt that it's a deal-breaker at quarterback with these coaches. It's probably much more a factor of a green right side of the line. We continue to hear that Clint Moseley is not going away quietly in the competition, and may well be the second best quarterback out there.

At Tailback U, the running back race is interesting. Mario Fannin is the front-runner at the position, but the expression "damning with faint praise" certainly seems in order here. Gus Malzhan was asked whether Fannin was stepping out front, and Gus answered, "We would definitely like him to." Zing! With undersized Onterrio McCalebb and untested freshman Dontae Aycock behind Fannin on the depth chart, I have to worry. None of those guys has a Stacy Danley/Rudi Johnson rep for durability. I think incoming All-World tailback Michael Dyer has a great shot at making an immediate impact.

Since Ronnie Brown and Jake Slaughter graduated nearly a half-decade ago, I'm a compulsive spring worrier about lead blocking for the running game. This year is no different. We DO know that Eric Smith can be a good, if not great player in that role, but with his off-the-field troubles, there was some uncertainty coming into spring drills. When asked about Smith yesterday, Malzhan opined, "He's a smart guy. He knows the offense very well. That H-Back is probably second only to the quarterback. You have to be aware of everything. We ask him to do a lot, but he's a smart kid. He's a tough kid, and he's also capable of playing tailback."

We may well see a bit of a different offensive look to the team this A-Day. Evidently Eric Smith, Phillip Lutzenchirchen, and redshirt freshman Robert Cooper are rotating at a hybrid tight end/H-back sort of position. This lifts one blocker, and puts another slot receiver on the field compared to the common look last fall. I'm betting that this opens the offense up. Last fall, the quarterback was not a threat to run the ball. This year, defenses will have to watch the back side with Newton in the gun. This allows the offense to run with one less blocker, and to have a variety of slot-screen options such as Ralph Spry, Emory Blake, DeAngelo Benton, or even Trovon Reed next fall.

As to practice videos, we don't get to see much beyond warm-up drills. What blows me away is that you don't see the bouncing balls on the receiving drills. In yesterday's warm-up, there wasn't a single dropped ball on the filmed juggs machine work. You just don't know how great that makes me feel! How many games did we lose in the '00s on dropped balls?

The offensive line dominated early spring drills to all accounts, but evidently the D-line is catching up a bit of late. Considering that starting right guard Mike Berry is out, and his top back up Bart Eddins is now out with a knee injury, that's not surprising. Right tackle remains a battle of two incoming JUCOs, Brandon Moseley and Roszell Gayden. I'm guessing that the defense is preying on inexperience on the right side.

Incredibly, Lee Ziemba is still getting flak for penalties from both the media and in public around Auburn. Sure, the guy has jumped the snap count a few times, and had a pretty miserable 2008 with a bum knee. But folks don't realize that Ziemba was our best lineman in 2009, and never took a holding flag ALL YEAR. He had 5 false starts, and was NOT the leader on the team on those. Me, I'll take a left tackle with no holds and no sacks given up ALL YEAR. He can jump occasionally. We will miss this guy BADLY in 2011! War Eagle, Lee Ziemba!

In other whispers, Darvin Adams has joined the ranks of punt returners at Auburn. Supposedly, it's only for "leadership" purposes, whatever THAT means! I think it means "catch the d@!n punt, or we'll put the one guy back there that will!"

Auburn appears to be set in the kicking arena. Wes Byrum returns for a senior season after a near perfect campaign last year. This spring, backup Chandler Brooks has been impressive as a backup kicker. I wonder if he's still wearing the yellow shoes? At punter, Ryan Shoemaker continues to hammer the deep punts. He appears to be back to his All-SEC Freshman team form of 2007. Should the leaders falter, Auburn does have major talent at both positions in the incoming freshman class.

If you're having a good day so far, I'd recommend skipping the defensive speculations after the jump.

The star of the past week in the secondary is walk-on safety Ikeem Means. Runner up is T'Sharvan Bell in the "gushing praise" roster. This is a unit that is currently fielding Mike McNeil, Aaron Savage, Demond Washington, and Neiko Thorpe among the starters. It's an uneasy feeling, to be sure!

Get ready for true freshman depth in the linebacker corps next fall. We know that the mainstays of the linebackers are seniors Craig Stevens and Josh Bynes. Stevens has worked on the weak side this spring. Eltoro Freeman is working on the strong side, but there are still concerns about him. About Freeman, a fellow linebacker said, "Toro's been doing good, He's just... every now and then he gets caught up in the play." Yesterday, Freeman wasn't doing the opening drills with the team. He was over with coach Yox, stretching. It seems to me that we're getting a set-up for Bynes to handle the middle, Stevens the delicate coverage/rush responsibilities off the weak side, and fresh meat to be thrown into the blocking strong side run support role. If you're healthy, you go in and stick your hat in the pile! Seems a far better strategy than last year's hodge-podge of weak side guys trying to cover dangerous backs and slot guys... There's been a veritable parade of candidates pushed onto the field to try and build linebacker depth, including Jessel Curry, Jonathan Evans, and Ashton Richardson. Coach Roof doesn't appear to be sold on any of 'em.

There's little to be said for the defensive line, but so far all are relatively healthy. This marks the first Auburn camp that hasn't seen the early exit of Antoine "Hot" Carter. As Auburn's top threat up front, it's nice to see Carter plugging away relentlessly!

Visitors to Auburn's Wednesday practice included ESPN's Craig James. I'm betting coach Gene Chizik made sure no slacking Auburn players were locked in the electrical closet for that session!