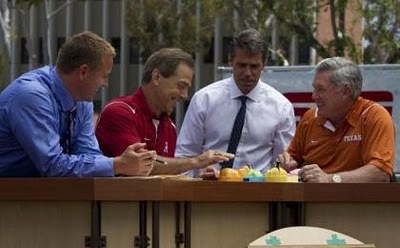 For those who thought last season's national championship game between Alabama and Texas was a chess match between Nick Saban and Mack Brown, it turns out that it was actually a game of Hungry Hungry Hippos and Jenga.

Nah, Nick and Mack were reunited recently to film one of those funny ESPN commercials. I'll let you fill in your own jokes today.